This post was updated February 2020, to include new images, updated resources and some editing to make it more clear (I'm a better writer nine years later. Maybe.).

Have you ever gotten up from a sitting position and felt a little tweaky in the hip? Hear an audible click when taking your first few steps after being seated, or a pop when kicking your leg out to the side?

What makes this snapping sound happen in the hips is similar to how you make noise when snapping your fingers. The amount of *snap* you get when you snap your fingers is based on how much you push them together. If you barely push your thumb and middle finger together, there's not much noise. There's no traction. But if you push them together with greater force, you get the snappy noise.

{Did you just snap your fingers? Isn't it cool to think that, somewhere else in the world, someone is reading this right now and you probably just snapped at the same time?}

Muscles should be able to lengthen and shorten, and the joints to freely change their position, but we don't move all that much. We rarely change position and so our muscles lose their ability to change position too.

Tight muscles transfer tension to their tendons. In the case of snapping hip, the tendon of the psoas major, which should be gently gliding over the pelvis as you move your leg, is pulled tight by the tense muscle, getting hung up on a small bony protrusion called the iliopectineal eminence (picture). The *noise* is the sound the rubbing makes, as the tendon passes over.

tight muscles + tight tendons + bony prominences = tendonitis, then a bone spur, and then a separation (tear) in the tendon itself.

The progression isn't comfortable, but if it is happening to your hip, there are some things below you can start to think about.

Perhaps because moving takes a lot of work, we tend to focus on "beyond our control" reasons like our bony prominence being too big for our bodies. While humans do have a wide range of anatomical variability, most of the time the variability is distributed throughout our body and matches up in a way that allows for basic functions like hip flexion and extension. Before jumping to the anthropometric dimension conclusion, consider how your alignment and muscle lengths are in play when it comes to creating ailments. Maaaaaaaybe your promininence is too big, but maaaaaaaybe your psoas muscle is just too tight. The latter, you can do something about.

There is a surgery for dealing with chronic tension in the psoas called an arthroscopic iliopsoas tendon release. As a geometry nerd, I find the idea of this surgery pleasing. Not the getting it part, but how the surgery makes this muscle longer. Now you may wonder (at least I'm hoping you wonder, because I'm going to tell you anyway) how does cutting a hole in something make it longer? Well, while doing laungry I came up with a way to explain how the surgery works using pictures.

This model begins with an old shirt, not belonging to me. 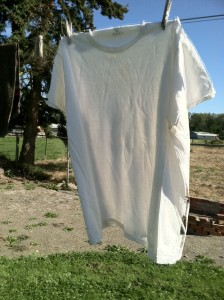 A man with hairy arms, pulling as hard as possible (without pulling said shirt off the line). The man's arms pull as the psoas muscle does and the shirt represents the tendon. Stretched to the max, it is ready to snap over a bony prominence at any moment: 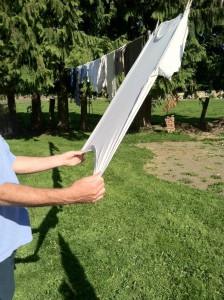 The surgeon will played by me and my kitchen shears. Which my husband didn't know were kitchen shears and has been using them for the last year as regular scissors, which he uses for everything, mostly cutting boxes, which is why I could barely cut the shirt. I mean tendon. 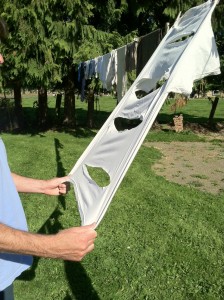 Comparing the pictures side by side, you can see the difference in length. And note: he didn't change his arm or foot position. 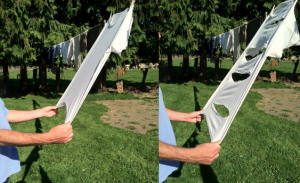 The structural integrity of a material is determined by the continuity of its fibers. When you take a material under tension and cut a hole, the cut ends move away from each other in all directions, kind of "thinning" the tissue. Cutting into the shirt made it longer, no question, as cutting into the psoas tendon makes the psoas' tendons longer (but not the psoas muscle itself).

Now there will be no more snapping, but of course, the ability for the psoas to be a strong muscle in the body is compromised because it now has to try to generate leverage while 1) it's still tight and 2) connects to a structure that looks like this: 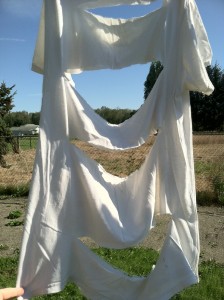 This procedure gets rid of the sound, as well as the friction, but in the case of an unyielding psoas, that tension remains. To me, this is the equivalent of disconnecting the fire alarm instead of putting out the fire. And, I get it. If the psoas tension is expressing itself as noise and pain in the hip, maybe this surgery can be helpful. Also helpful in a less invasive way: testing your psoas muscles to see if they're able to relax as a way to get (actually) longer.

P.S. Getting your psoas to release is different than simply stretching it. You have to learn to stop using it to do everything (walk, hold you upright, etc.).

Lay your head and shoulders on a bolster or stack of pillows, making sure nothing is underneath your ribs. 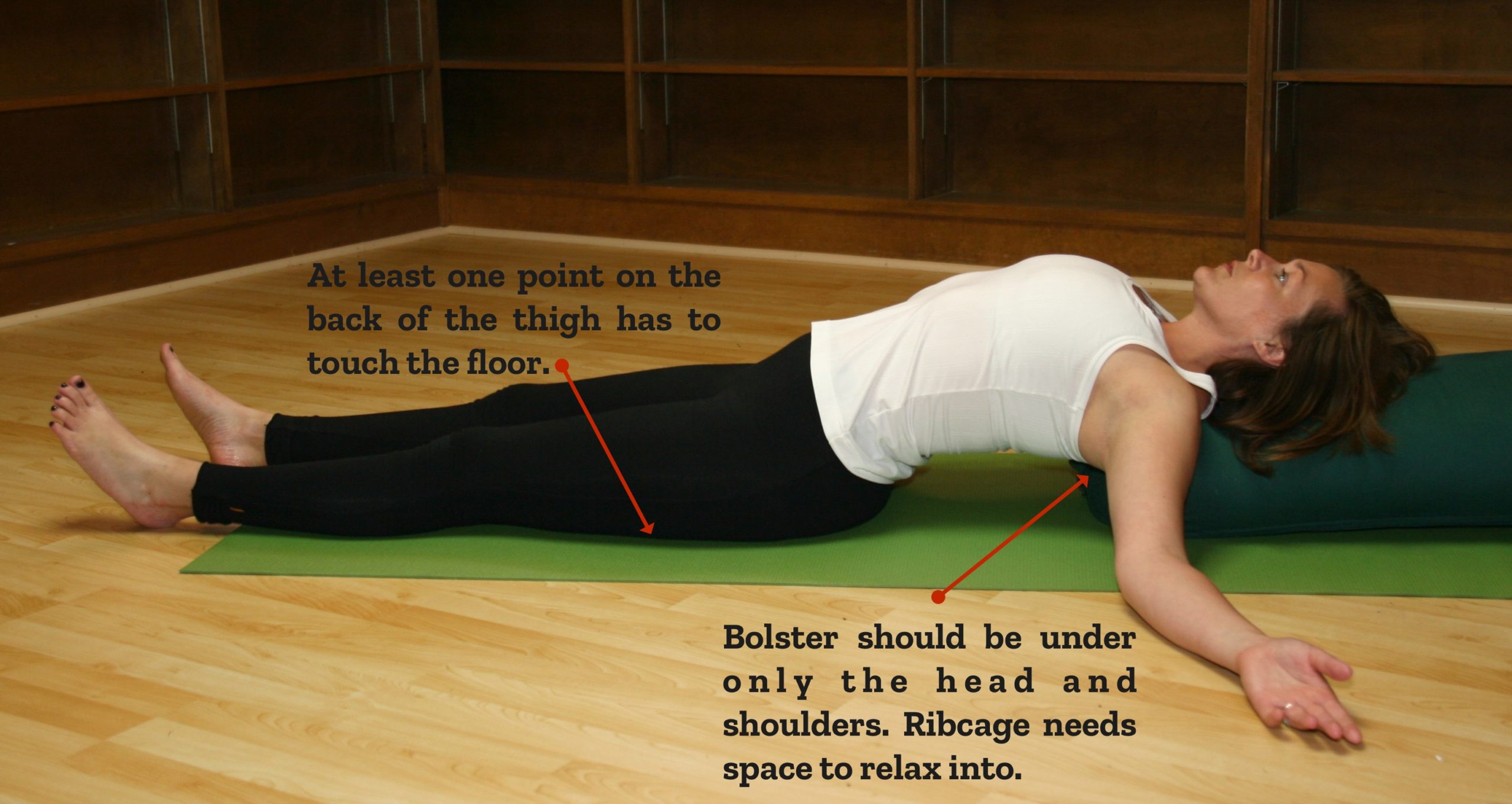 If your ribcage is up in the air when your thighs are down on the ground, then your psoas muscle is not relaxed to a length that allows you to stand fully upright.

When a psoas muscle relaxes, your ribcage should look like the one pictured below (ribcage dropping towards the floor because gravity).

Note: You shouldn't have to contract any muscles to get it there. This should be your relaxed position. It doesn't count if you have to work your muscles against each other; in this case you're pulling your tendons into your bony prominences even more!

If you find your ribcage is up in the air as in the first picture, just sit (lie, really) with it. There is nothing to "do" to fix it. The only thing to do is close your eyes and scan your body to see if you're holding tension in the trunk. You're like an onion, so you'll need to progress in layers, relaxing in waves, but it's so worth it.

For more on the psoas and how it moves your body, read Psoasana Until You Can Savasana and Are You A Rib Thruster. For information on how the psoas impacts whole-body health, read Our Best "Healthy Pelvis" Resources. For more moves like this, check out our digital exercise courses, including Whole Body Biomechanics: Feet, Knees, and Hips.