I read a ton of birth stories the last three months, mostly at inappropriate hours of the day. My favorites were those that really are “before birthing” stories, as the process is what I was most interested in. Here’s my up-to-a-birth story.

Let’s start back, way back, after eight puzzling weeks of weight loss, nausea and general WTH? I already had one negative pregnancy test a month back, so I chalked it up to book touring. But on a whim I decided to take another test, using an old test I had bought the year before, when I was pregnant with my son.

Did I mention I had a 9-month old when I took this test?

Picture this: Me, peeing on a stick then holding said stick up to the window saying to my husband “they should really put a "Don’t hold this stick up to the light, as embedded blue line will appear darker even in the absence of pregnancy” disclaimer on the box."

I actually said this. Out loud.

Then picture this: Me, placing the aforementioned stick on the counter, noticing the line was still visible.

And then picture this: Me, sitting on the floor, holding the aforementioned 9-month old, for about 17 hours saying, Are you serious? And drooling. I believe there was drooling.

Flash forward 8 months (I was 2 months pregnant when I realized it). I’m super-thrilled the new baby is about to come. And, while I understand that all babies take their own time, my first one came at 38 weeks, so I’d be lying if I didn’t *expect* this one to be the same. Ha ha, I know.

At 38 weeks, I decided to participate in the local family fun run-walk. It was only a two mile course, a great way to spend a Saturday morning, and I didn't have to carry the kiddo. The Huz was going to carry that load.

It was awesome: the walking as well as watching all the people freak out because not only was I so pregnant, I was also hurdling the hay bales. Did I mention it was an obstacle course? I walked, hurdled and tire-ran with the best of them. Or with the last of them. Although not the absolute last. As it turned out, my slow-but-steady walking (compared to those who shot out running but then slowed) allowed me to slowly take over one person...and then another...and then another. Pretty soon I was at the front of the back-pack. The leader of the slow-pokes. My competitive streak (huge!) had kicked in and I started to walk fast.

My pace was not even hindered by one of the obstacles featuring a guy in a giant Mr. Potato Head costume (don't ask), which scared the Little Man into my arms. No big deal, just me carrying my 35-pound pregnancy + a 26-pound one-year old scanning furiously for a very tall man in a very disturbing costume.

This is what really kicked me into gear though: the woman behind me saying “there’s no way I’m going to let a pregnant lady beat me.”

Oh yeah? This is a picture taken by the race photographer. 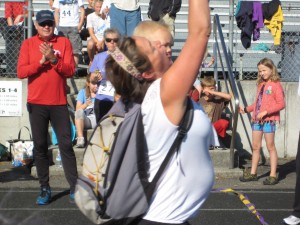 Note the 38-week belly, the 26-pound kid, the back pack of supplies and the worried look on everyone's face in the background. Also note the fact that I was running. Like the guy in Chariots of Fire. I do not deny my competitive streak. And, because the story goes on (for a few more weeks) you don’t have to worry. Nothing happened more than a super-huge nap that day.

And nothing happened the next week.

Nor the week after that.

Nor the week after that, except that my friend arrived expecting to help “post-baby.” We got to hang out for a few days which was awesome. Especially because the weather had officially turned to Fall, my favorite.

This is what a night of fog does to spider webs. It gives the place a Halloweeny feel which is awesome. 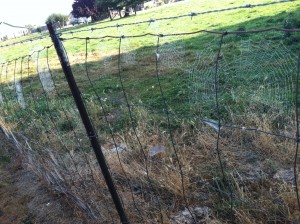 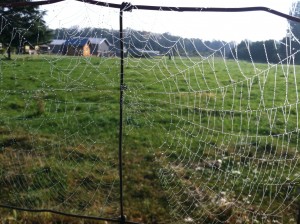 By my final week of pregnancy, walking with the fam, which usually looks like this: 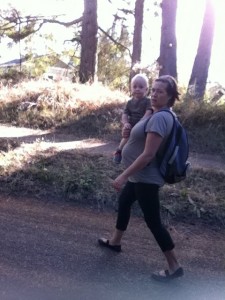 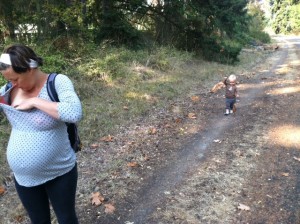 The kid, walking by himself and me, looking down my shirt and scratching something inappropriate.

And then, finally, It began. Which was good, because my What to Expect When You’re Expecting App started to sneer: YOU ARE PAST YOUR DUE DATE. AND P.S. YOUR BABY IS THE SIZE OF AN OVERSIZED PUMPKIN. YOU MUST BE MISERABLE.

I didn’t have any pre-labor contractions with either kid, so it just started with a little show in the morning. I took a walk (of course) and then just hung out, tidying the house and eating and resting. These were things I didn’t do with Number One that I should have done, and I’m a good learner 🙂 .

Nothing was really happening beyond a contraction every hour until about 7PM, when I started getting a little more regular. How did I measure my contractions, you ask?
With THIS handy Contraction Tracker App: 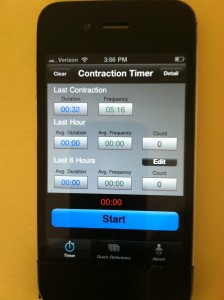 Because I’m such a data-head, I wanted some way to keep track of the stats. I chose this one because 1) it wasn’t pink and 2) it wasn’t made by the same people who make What to Expect When You’re Expecting. I was afraid the WTEWYE timer would say stuff like, Congratulations, only 298 more contractions to go! or, Don’t worry! If anything goes wrong now, there is still plenty of time to drive yourself to the hospital where they can save you!

The one I used looked like the cockpit of an airplane and only had one button to push. I was smitten.

At about 10:30PM, I decided to go to bed. The last time I labored, lying down was a necessity for me to progress (yes, there is such thing as walking around too much or being too active I was told). Once in bed, I slept in between my increasing-in-length-and-intensity contractions. As a Vipassana meditation student, I found a particular ease in stillness throughout each one, where the same thing ran through my mind with each contraction: All you are doing is making space. Hardly any parts are moving and the tissues that are changing are only barely doing so. And then I’d scan my body from my head to my toes and see that while it seemed that everything was in painful tension, almost nothing was -- a realization that allowed me to relax which, of course, led to less resistance against the opening of my parts.

I did this until 3:30AM, silently sleeping next to my husband and son. This will always be a treasured event in my life -- this five-hour stretch of time. Everyone in the house was sleeping and there was a sweet stillness in the house that matched the stillness I was trying to cultivate in my mind.

At 3:35AM the contractions jumped from five to four minutes apart. Time to call the midwife. By 4:30 the house had five more people in it: the midwife, her two assistants, a five-month old son of an assistant, and my sister. Although I’m a public personality (hello, people reading this on my blog and on Facebook!) I’m actually a very private person. Keeping focus was now a challenge so everything seemed to escalate pretty quickly. After five “public” contractions, I needed more space, more quiet, and less heat.

To the birth tub! 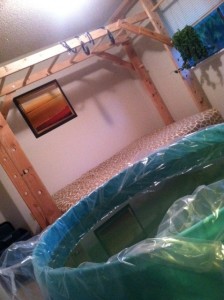 (No monkey bars or rings were used in this birth, but do you like my Giraffe-camouflage sheets?)

After being in the tub for about 75-minutes (which was, what? about a million contractions?) I yelled that I had to push.

“So, go ahead and push” my midwife said. To which I thought, WELL IF IT WAS TIME FOR ME TO PUSH, WHY DIDN’T YOU TELL ME THAT I SHOULD BE PUSHING? (See how difficult it is to really really really comprehend how other people aren’t in charge of your birth, but that your body is?)

My water broke with that push.

Still on my hands and knees in the tub I heard my midwife say something about seeing the head. Something like, “see the head there?” to my husband. And then she told me to put my hand down there to feel it. To which I said “All I feel is slimy.” And then I PUSHED while my hand was down there and HOLY CRAP the head was already coming out.

Then it (the head) was out.

And then I said “stop pushing on me!” because someone was poking my tailbone and hips.

And the midwife said "No one is touching you, Katy."

And then I realized it was the baby squirming on the inside. And I said “It’s the BABY moving inside me!” and on the next contraction, out she slipped. Like a rocket. Or a squid. Or some rocket-like sea creature. And I pulled her out of the water and up to my chest.

Roan Eilish, born at 6:25, the morning of September 26, without a hitch or stitch. 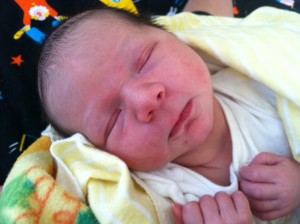 It was pretty freaking amazing, and even better then not coming in last at the family fun-run.