This morning there was a great question on our Aligned and Well Facebook page:

I'm active in a pregnancy group here on Facebook, and it's so sad to hear all these women having problems with pelvic pain, leaking urine and even prolapse. They think it's normal and just something they have to live with. I keep posting about your exercises, but can't seem to get through to them. Does the idea of healing yourself with exercise and alignment perhaps sound too good to be true?

In 1975 two researchers (Becker and Maiman) developed something called the Health Belief Model (HBM). They suggested that the likelihood of someone adopting a behavior that would prevent or correct some disease or physical issue depended on two things. And, don’t worry. I’ll tell you what those are two things are.

And in case you are wondering that I am some sort of information freakazoid, let me introduce you to a little garage sale find called Advances in Exercise Adherence (pictured here, with my baby, and he simultaneously reads and plays in the trash). 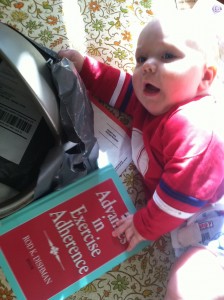 This little textbook cost me a whopping three bucks. You never know what treasures are lying around other people’s houses. Which makes me sound a bit like a Klepto. No judgments on my klepto readers. I like shiny things too.

So, applying the HBM to your question, a woman would need two things to be motivated enough to follow your advice on alignment and the pelvic floor. She would need to:

1. believe that she had a personal vulnerability to PFD (or SI or hip pain) and

2. believe that the consequence of these conditions would be severe.

The first isn’t typically an issue because chances are, if they’re reading your posts (or mine) they already have an issue. There’s not a lot of wondering if they’re going to have PFD someday -- someday is today.

The severity of the issue is more challenging. I don’t think that women understand that a little PFD now means a whole lot of PFD later.

I write until I’m blue in the, uh, fingers, that if you have a little PF issue now -- perhaps a bit of a sneeze-pee -- that in the not-to-distant future, your organs will be falling out. Your hips will need replacing. Your knees will need replacing. Your SI joint will wobble around and push on your sciatic nerve. Your toes will go numb. Your lumbar spine will degenerate. Your organs will need to be removed. Your vaginal delivery will likely turn into a cesarean.

I’ve just decided that the theme of 2012 is Personal Responsibility. Oh, and Upper Body Strength. Which reminds me that I need to go hang from my indoor monkey bars for three minutes before I spend anymore time on this post. 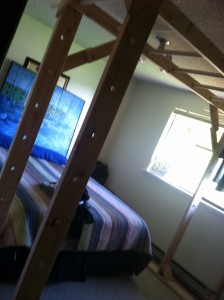 Ok, I’m back. And buff. And definitely in that order.

Now that I’ve explained the Human Belief Model, I need to add some more info. Cuz you see, the HBM is not really that complete. It turns out that many people know that they need to get exercise to avoid dying. They believe that they will die if they don’t do it. Yet they still don’t do it. And, we don’t even have to go to the extreme of dying from something. Most of you, dear readers, have some ailment that I’ve given you an ExRx or info to follow and you still don’t really comply with a regularity that matches your desire to no longer have Issue X. Well, not you, who is shaking your head right now and saying “not me, I follow your advice to a T.” I’m not talking about you.

You used to sit in the front row of the class, didn’t you?

So why is it that we can’t seem to manage to execute the behaviors what we desire to? Enter the Self-Efficacy Theory. This 1977 theory (ha, I was born just before this came out) states that “all behavioral changes are mediated by a cognitive mechanism of perceived efficacy” -- which is a lot of fancy words to say that you have to believe that you can perform the recommended behavior.

I like the word believe, because as a science-type (you know, all boring and math and lists and bad at art and no passion and left-brain and black and white and I don’t see in color and I can’t really taste food and my life is very straight and adventureless) I don’t really know what it means. Yet, I’ll bet that you, like me, know what it feels like to be 100% on board with what you believe.

Here are some indicators that might help you identify a lower level of self-efficacy:

“I’m afraid that I’m not doing it right”

“My attempts at health have failed in the past”

“I’m not that coordinated”

Your belief system, especially your ability to physically do something, is learned from your personal experiences as well as the good and bad experiences of those you model (parents, peer group, etc.).

The Self Efficacy Theory has been researched and is believed to be the most successful in explaining habitual exercise behavior. Which is a lot of fancy words that says even if your organs are falling out and your hips hurt so badly that you can no longer walk, and even if you thought that them falling out would kill you (good news: it won’t) you STILL wouldn’t spend a couple hours a day doing your exercises and make a standing work station and give up your heeled shoes and value your health enough to really invest in it because you don’t believe that you can change.

And therein lies the problem. It doesn’t matter how many solutions you post, or how many blog posts I write and emails I answer. The steps toward repairing (anything) need to be taken by them, your readers. They have to value the repair more than you do. And that’s tough, because you’re excited and following it and posting about it because you’ve chosen to help others. They’re reading your FB posts as something to fill extra time and aren’t necessarily looking for answers -- just interaction, which are two fundamentally different things. Interaction is often mistaken for taking action.

Then, original poster, there could be the other issue too -- that they totally believe in themselves and just don’t believe what you are posting. The prevailing notion that our body injuries are a result of a single incident, and not the slow accumulation of micro-damage, makes it very difficult to even begin understanding our ailments.

If asked, by a health practitioner, to explain how your back went out, you are much more likely to explain: "I was moving a 40-pound bag of cement up 27 flights of stairs," than you are to say: "I've sat in a chair for 10 hours a day for, oh, I don't know, 17 years, and then I've been under a lot of emotional stress too, when I used my body for a huge athletic feat with no training program whatsoever."

In other other words:

We have an inexcusable lack of knowledge regarding our own function, and the inability to see that What We've Been Doing is what has led, directly, to the ailment you have now.

So, maybe they think you are spending your valuable and precious time posting nonsense. Although I believe (with the other half of my brain that’s more interesting and has a personality and passion and loves poetry and sewing and rainbows and fairies and stuff) that, if you have come here to read, or they have come to your site to read, that the material is resonating them on a cellular level. The fact that they don’t trust the info has more to do with trusting their own ability to do something with it -- their efficacy.

P.S. I couldn’t post the problem without posting a solution, can I? If you feel that you might have an issue with self-efficacy, then do a little mental investigation.

1. Do you regularly interact with people who were in your household when you were growing up?

2. Do they (not you!! Do they -- never you -- this is about them) regularly make excuses to avoid learning or doing something new (doesn’t have to be body-related either)?

3. Even if you REALLY WANT to change something, do you have reasons that you’re not doing EVERYTHING THAT IT TAKES to make that change?

6. If you could only make yourself 25% better, does improving your health 25% have value to you, or if you can’t be 100% better, are you tempted to do nothing?

Once you start doing this type of research you might become aware of a more hidden efficacy issue. It’s really fun.