I don’t really have time to write a post just now, but while working on some book research, I stumbled on this article: Menstrual cycle variation in women's preferences for the scent of symmetrical men.

Um,  what? What? After I read the title 20 times to make sure it was written in English, I actually said holy $#!t out loud and then laughed for about 20 minutes.

I tried as hard as I could but I found that I cannot resist sharing this with you. I mean, there are just some things you need to know, and this is one of them. It also just so happens I have found myself in the back of a van with two sleeping kids, so the universe has aligned for us (you and me) once again.

To recap: Menstrual cycle variation in women's preferences for the scent of symmetrical men.

Just wanted to put it out there again. It’s less a research article title and more like some sort of strange personal ad. Or my next musical album. Did I tell you my band’s name is The Scent of Symmetrical Men? Well it is.
Part of the methods section from this study: “College women sniffed and rated the attractiveness of the scent of forty one T–shirts worn over a period of two nights by different men.”

I bet a lot of you do something similar only don’t call it research but laundry.

According to this paper, women can best smell “attractive,” attractive being further quantified as face and body symmetry, when they are most fertile.

Which made we wonder, does getting more aligned make you smell more attractive? The article also made me want to quit my job and start an alignment body spray line called Symmetry. For him.

But then I read another, similar article and found something interesting: Non-American college ladies picked asymmetrical men when they were most fertile. And, according to the paper’s deets, they also found asymmetry more attractive. So it seems that in addition to just smelling symmetry, women might be able to hone in to the scent of a person they are attracted to.

An important note: I could find no studies determining if attraction to chocolate fluctuated, so obviously, further research is needed.

I totally got sucked into about 10 articles before I had to yell enough! and throw my computer across the room. But before I stopped, some of the things I found in my (procrastination-like) literature perusal were:

Although, not necessarily supported by any of this literature, it certainly can’t hurt to work on your alignment, fellas, just in case the chicks dig it. It’s also a good reason to skip a shower, perhaps, in case all your fluffing up puts out a smell that isn’t a good representation of your chemical counterpart.

I was also going to write about this article: Women’s preferences for male behavioral displays change across the menstrual cycle. But do I really need to?

P.S. I've written you a little note here, explaining where I'll be for the next month! I decided that, while writing a book on why natural living=health, I needed a little internet detox. I am finding that spending more time writing, while trying to keep up my same pace interacting with you all online, is cutting into my outdoor, walking, mobilizing, natural-living time. A problem that is both unacceptable  and simply (although not easily) remedied by changing my habits. I'll see you in a month! 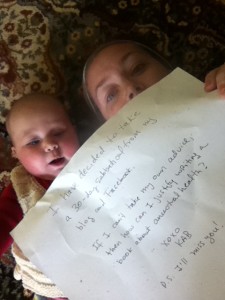