I swore that when I had a kid, there would be no flashing, beeping, or otherwise annoying toys in my house.

Now the great thing about these toys is they help develop motor skills. When you touch a button, you are rewarded with a buzz or honk or something, which gives a kid a sort of a calibration. They can practice the motion until it is refined, using the sound as a sort of beacon in the dark. I don't need to mention what's no so great about the buzzing beacon, do I?

But 3 months have passed and it's time to give him a little more stimulation than what being carried all over town and the occasional hand puppet show provides. His muscles need to start developing motor programs, but I have this thing against plastic. Especially noisy plastic.

I also happen to have a kid that loves to punch. Seriously, I have been punched in the face more times than I'd like to recall. I needed to focus the little *fists of fury*.

Killing two birds with one stone, I hung up some chimes. Well actually my husband hung up some chimes (to an old phone line cord, to an old belt, to the ceiling). It's not the prettiest of toys but it took about 5 minutes before the Kid realized that the general waving of his mighty fists would make a big clang on contact. 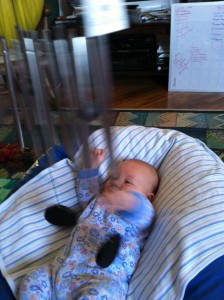 Fast forward a week and I now hear chimes in my sleep.

But the kid has some serious ability to connect. And what's really cool is he doesn't need to look at the chimes once he figures out where they are. He can look at other things and use his proprioception to make the movements that make a lot of noise. Isn't that awesome??

A few days later, we needed "advanced chime" exercises. This consisted of getting his feet below the chimes. This one was great too. And if the career in boxing doesn't work out, there's always soccer, or kick-boxing ("sport of the future" -- name that movie!) The leg-chime time is also his diaper-free time. In addition to the benefits of letting skin breathe, it is essential to have a break from things that push baby legs apart. As a culture we place babies in a lot of knees-apart situations (picture most baby apparatus, and diapers!) and babies can't really develop deep core with a big ole' diaper on.

The constant hip-open position (called abduction) is one of the reasons many of us suffer from foot, knee, and hip issues as adults. Kicking the chimes sans britches helps develop the deep core musculature along with the inner thighs. And, P.S. In addition to musculoskeletal benefits, the kick-chime exercise is great exercise therapy for babies with low tone or digestion issues too.

So chimes. Toy? or Personal Trainer?

In fact, why we really need is some adult-sized chimes. But, keep your pants on, will ya?

I'll be keeping my eyes open for different chimes, as each set not only mixes it up sound-wise but will require a unique and novel motor program for the little guy. Plus, I just really like to garage sale. (As does anyone who uses Garage Sale as a verb...)

{note: Thank you, reader Kate Y. for sending me the Michael Olaf (www.michaelolaf.net) Montessori catalog! I just found out that they make a European Toy Hanger where you can suspend baby toys without having to tether them to electrical devices, like ceiling fans (which I don't recommend). Smart. It does beg the question though, is the toy hanger European, or is it a hanger for only European Toys?}