Once upon a time (in 2007) this blog was written for about 20 people who had taken my certification course, as a way to answer questions, continue education, etc. Then, somewhere along the way, it became popular with people I’d never met. In places I’ve never been. Like Wisconsin. And Bulgaria. Which was both weird and extremely cool.

Writing this blog used to be a hobby. I’d write a post a month. The one day I decided to see if I could do one post, every day, for thirty days. Once I did that, I found that I could write faster and better (debatable) than I ever had before. And all of a sudden there were a thousand readers. Which was both weird and extremely cool.

In 2011 and 2012, I averaged almost two posts a week, and sometimes three. I also made and birthed two children. In two years. Which was both weird and extremely cool. I thought this would slow me down. And it has slowed me down. But it has also inspired me to do more. And share more. And write more. So, there’s a balance I’ve struck, at least for the time being.

This past year, I spent an average of twenty hours a week writing blog posts, answering comments, and responding to people on Facebook -- all stuff I do for fun, because I love my imaginary friends on the computer. 😉 And what I have noticed is, there are groups of people who read this blog.

These groups are:
1. People who have trained extensively with the Institute.
2. Alignment freaks.
3. Natural Movement freaks.
4. Regular folks with problems.
5. My dad.

Which reminds me of the groups back in high school:
1. The jocks.
2. The quadies.
3. The drama nerds.
4. The regular nerds.
5. The kids that got on well with all the teachers.

The problem with me, is, I’ve never really fit into any one category. Back in high school, I lettered in swimming. I was a cheerleader (please never mention this to me) as well as the mascot. I starred in all the school plays AS WELL as the musicals.

Yes, in addition to terrible jokes, I sing. Better than I tell jokes (debatable).

I was the senior class president and in the top 5% of my class, a science geek and wore glasses and was a huge nerd. Like one of those people on that show with the nerds that has the name I can’t remember. Most of my teachers back then are currently my friends. Which never ceases to be weird. And extremely cool.

My point is, I've never really fit in to any one category and I still don’t today, professionally speaking. Why? Because every group has a particular perspective that I find a bit too narrow.

When I consider the list of reader-groups, it makes me think: What is this blog about? Is it alignment? Is it natural movement? Is it exercise prescription or health? Is this an evidence-based blog or is it a blog to address how current research is regularly coming to culturally-based conclusions, which is decidedly unscientific despite the use of the scientific method? And yes, these are they questions I mull over daily. Which is why I meditate.

When I write stuff on the blog or on Facebook, I get differing feedback. 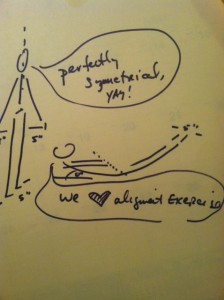 And Natural movement junkies are like: SYMMETRY IS UNNATURAL. YOU SHOULD USE YOUR BODY ALL SORTS OF WAYS AND ALIGNMENT IS LAME AND ONLY CRAZY PEOPLE TALK ABOUT ALIGNMENT. 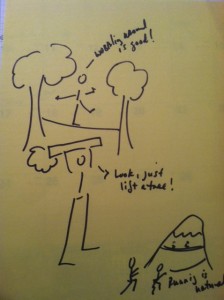 And my Dad is like: EVERYTHING YOU DO IS WONDERFUL. YOU ARE MY FAVORITE. CAN YOU DO A POST ON HEMORRHOIDS? SOMEONE I KNOW HAS THEM. 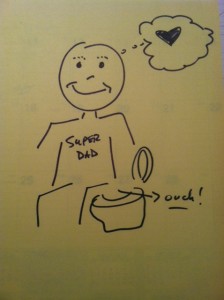 You can see that there are many people coming from different perspectives -- each interested in something to apply to their personal world. This year, however, I would like to integrate the information. Because to address any one particular group in particular undercuts the larger message -- and healing -- to be found in this information.

What Natural Movement Nerds tend to miss is, you can’t take a human body, conditioned to shoes and chairs and climate control, with computer hands, necks and shoulders and throw it into a tree or under a rock without exceeding the body’s physiological limits of timely adaptation. There is a tremendous amount of restoration under tiny loads that is required to get a tissue's cells back to operating at capacity. Often times this requires years.

What Regular Nerds tend to miss is they don't need a knee-specific blog post. A post on pelvic positioning and the content of the foot book are exactly what they need to fix their knee problem. If you find this information helpful, start to read everything on this blog -- not just the posts with the word you think you need to look for.

Another thing Alignment Nerds might miss is that Alignment is not a fancier or smarter word for posture. Alignment has less to do with joint position and more to do with the position of loads. There is no position the human body is supposed to be in all of the time and it’s our lack of using ALL ranges of motion as well as our habit of using one position ALL of the time that’s the problem.

Another thing Natural Movement nerds might miss is that Playing and Exercising Outside or tossing metal balls (or tires) that weigh the same as trees and rocks doesn’t automatically meet the load requirements of human tissue. Natural movement is phenomenal stuff, and there is a long list of variables that a natural movement program needs in order to be in alignment with biological function.

Cuz, you see: Alignment is not a word to be exchanged with posture. Alignment, instead, is the creation of forces created by position or consecutive series' of positions. For example, everyone can walk without a neutral pelvis, but if one walks without a 30° range of loaded hip extension, or has a 30° hip extension but doesn’t walk around, the abductors (which are responsible for holding the body's weight while on one foot) generate less force, which in turn creates fewer and smaller mechanical strain cycles on the femoral head and neck. This, in turn, halts the bone-formation process. Result: Lower bone density.

While the human should be able to move in an infinite number of ways, there is a loading requirement for each tissue in order to accomplish it's "job." Your mechanic aligns your tires not to keep them in one position all the time -- which would make driving hard! -- but to ensure that the use of one car part is not destroying another. Body alignment means this as well, although I'm fairly certain the term is misused 99.9% of the time.

If we were living in a time where hunter-gathering activities were required, there would be a huge amount of time in neutral pelvis as hunter-gatherer activities of daily living require a lot of upright walking time. Our modern activities of daily living require almost zero upright walking time. We're left with cramming a neutral pelvis into modern living. This is a step in the right direction but if we end the discussion there, I’ve failed to teach the larger picture. A neutral pelvis is only really required for appropriate loading during the gait cycle. If you're sitting in a chair, is it better to "neutral your pelvis" or get the heck out of the chair?
This is just an example of one tissue (bone) in one location (the hip) and one set of alignment points (pelvis) as used during a particular activity (walking). The list goes on and on. Takeaway message: A particular range of motion isn’t the end-all and walking around without you bones in a particular arrangement isn’t the same as walking with them in a particular arrangement.

In a nutshell, the human body, moving in a natural way over a lifetime, would have a much lower frequency of the affluent ailments. The human body, without birth interventions, bucket seats, strollers, boppies, moppies, toppies, school desks, shoes, computers, dance training, sports training, flat surfaces EVERYWHERE, man-made surfaces, pre-fabricated step size, office chairs, ergonomic desks, reading, writing, not enough sunlight, too much UV, music, scary movies, Walmart, cars, planes, trains, bicycles, and Hostess Cupcakes, should expect different outcomes than one that has been developed under these conditions. Therapists, teachers, scientists, researchers and YOU should take interest in these differences. When we talk about the human body, it should be noted whether we are talking about the human body or the human body under these modern conditions.

I don’t expect you to become interested in moving into a cave and giving up your clothes and computer as a result of new info, but that doesn’t mean that we should begin to steer an entire science -- human health -- away from this knowledge. Because what if we wanted to give up the Twinkie? Or the constant air conditioning. Or the stroller. Or the office chair. We should be aware of the options that are available to us, instead of subscribing to a paradigm that begins with the premise that everyone values convenience more than their health. I don’t, always. And sometimes I do. It’s a personal decision, and when we choose from an informed place we can feel less victimized by our health and be more responsible.

To get our body back on track, we must first take stock of our current habits and the muscular pathways they have left behind. This gives us insight into which places move and which don’t. This requires objective measure, which is why alignment is an essential component of body-restoration. Then you can measure your current habits against your current body ranges of motion. Then you can adjust your habits and slowly close the gaps of minimal or excessive mobility (and resulting lack of strength) with corrective exercise.
THEN, you can choose to move.
Or, sit and read this blog. Or one and then the other.

So, anyways. That's what this blog will be about in 2013. This is the year that I (attempt to) integrate information. So that we’re all alignment lovers. And natural movement lovers. And experiencing relief. And realizing what a flourishing-and-not-just surviving body feels like. And feeling the love for one another.

I hope you're excited, because I am.

Ok. On vacation for the rest of the year.

Be good. Be well. Be happy.
Metta,
Katy