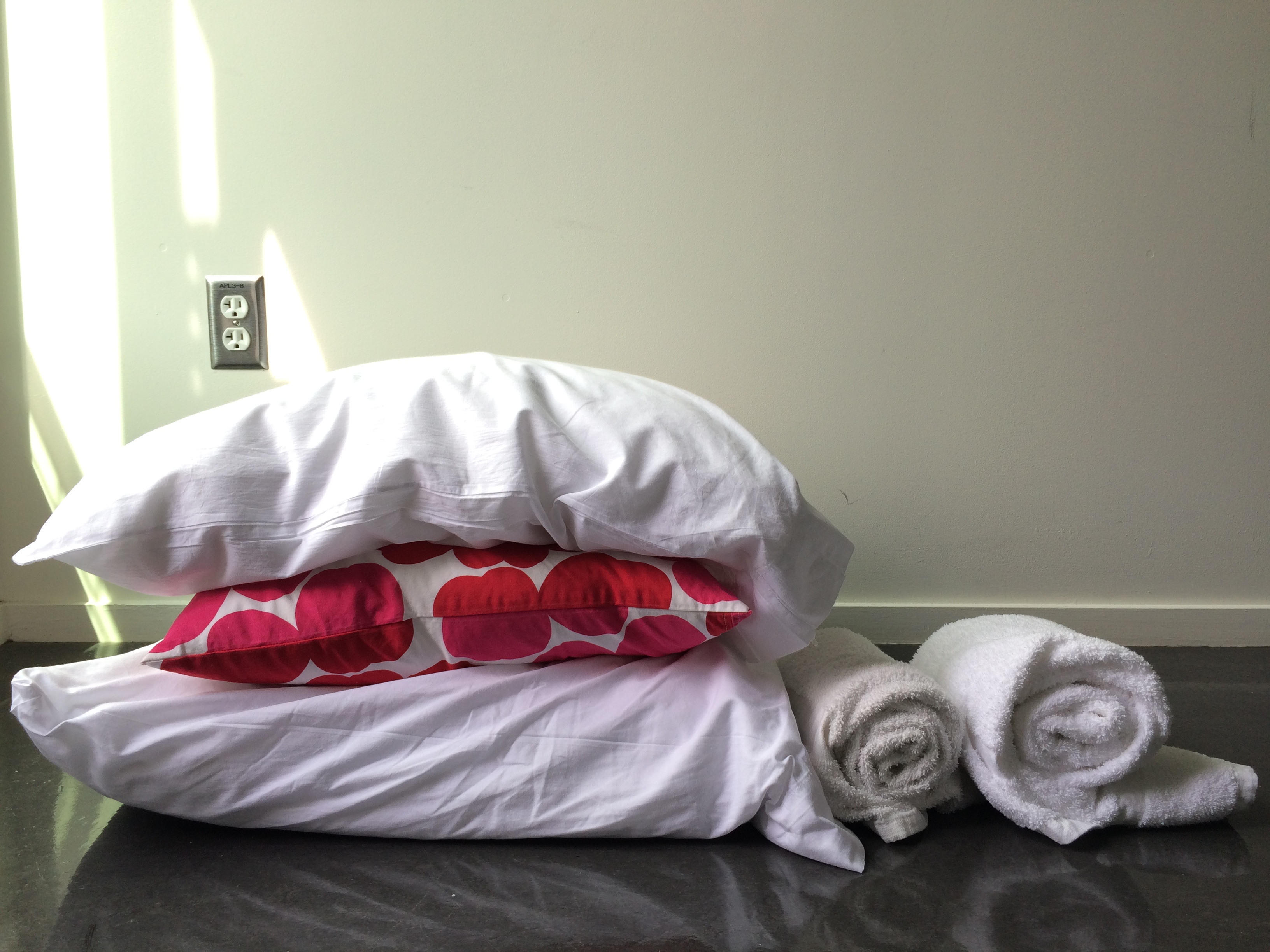 Savasana (also known as “corpse pose”) is often labeled one of the most challenging yoga poses, the idea being that chilling out can be difficult for so many of us—it’s not easy to relax and just lie there while continuing to stay engaged with ourselves.

While I agree that savasana is not easy for everyone, “relaxing can be hard” was not one of the reasons savasana landed in a new paper in Mayo Clinic Proceedings this spring: “Soft Tissue and Bony Injuries Attributed to the Practice of Yoga: A Biomechanical Analysis and Implications for Management.”

In this paper, the authors reviewed the medical records of 89 folks who reported an injury following a yoga move and noted which moves were problematic* and for which bodies, i.e., preexisting issues like hyperkyphosis, osteoporosis, spondylolisthesis, etc. While it was low on the list of 12 poses (in the bottom three, but more injurious than headstands and splits), one of the poses posing a problem (say that three times fast) is savasana.

Most of the pose-injury relationships were pretty straightforward in how they could be possible, but the paper didn’t address how “lying down” in savasana could make an injury. It’s not an “end range” move like the splits or thoracic flexion under a heavy load, like being on your back with your legs over your head is, or even spinal flexion for that matter. So allow me to weigh in. Or should I say “psoa allow me”. #foreshadowingpun

One function of our joints is to give our body access to various environments. In the case of lying down, joints throughout your body have to be able to articulate enough to give your many lying-down parts access to the floor. Said another way: In order to lie on the floor, you have to be as mobile as lying on the floor requires you be.

When the bulk of our hours are spent in the exercise of sitting in relative stillness, we adapt to this fetal-ish position. When we sleep at night, we do so on cushioned surfaces that accommodate this chair-shape, allowing even more hours in a similar position. P.S. This is why I sleep on the floor. The firmer surface challenges the “being on the ground” mobilities of not only my joints, but of all my flesh. The result of all this repetitive positioning? Many of us are not actually lying flat when lying down on our backs.

Tight hips, legs and upper spine (i.e., physical adaptions to decades of chair sitting, among other habits I’ve gone on and on about) can make our lying down less like 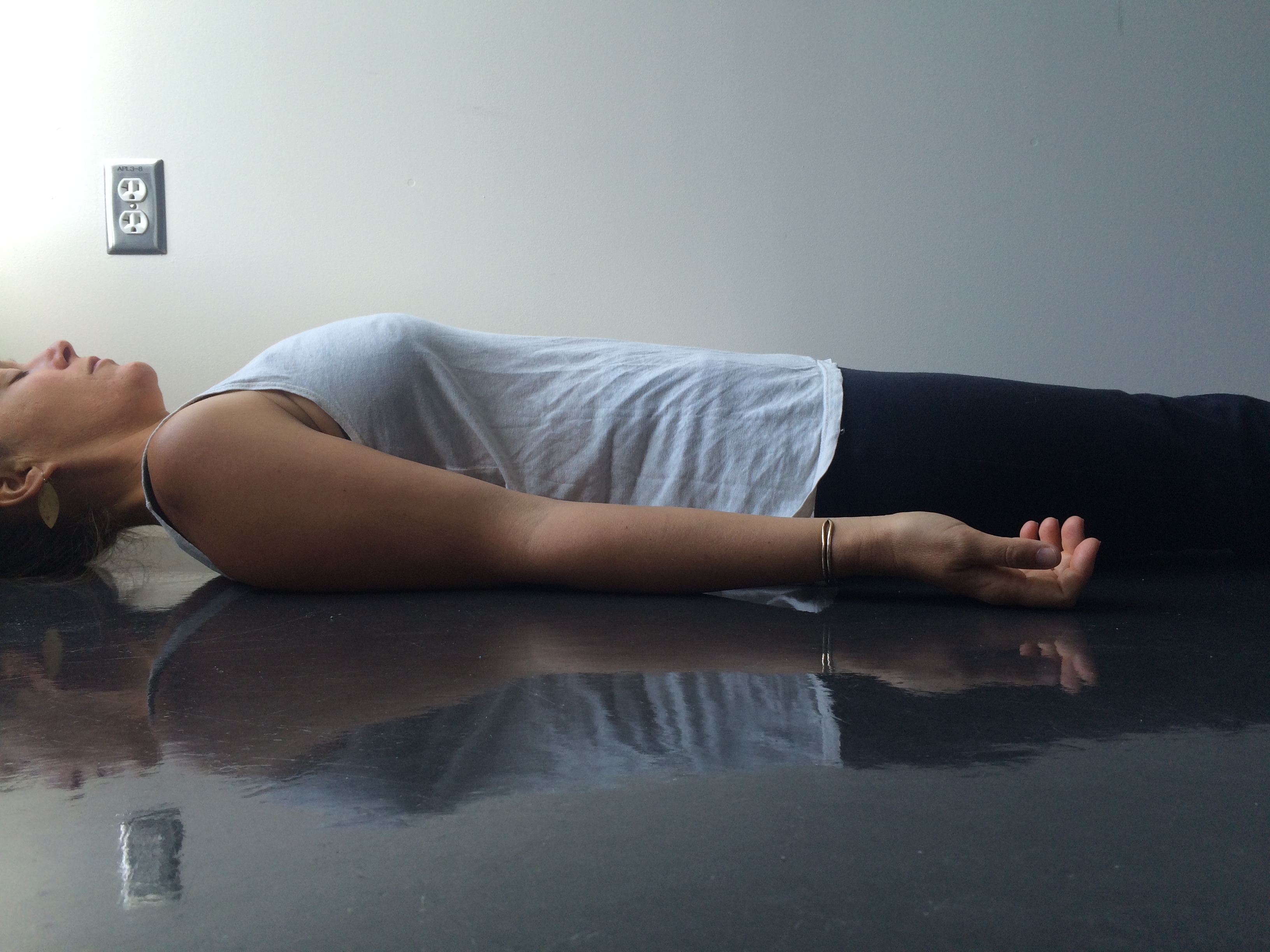 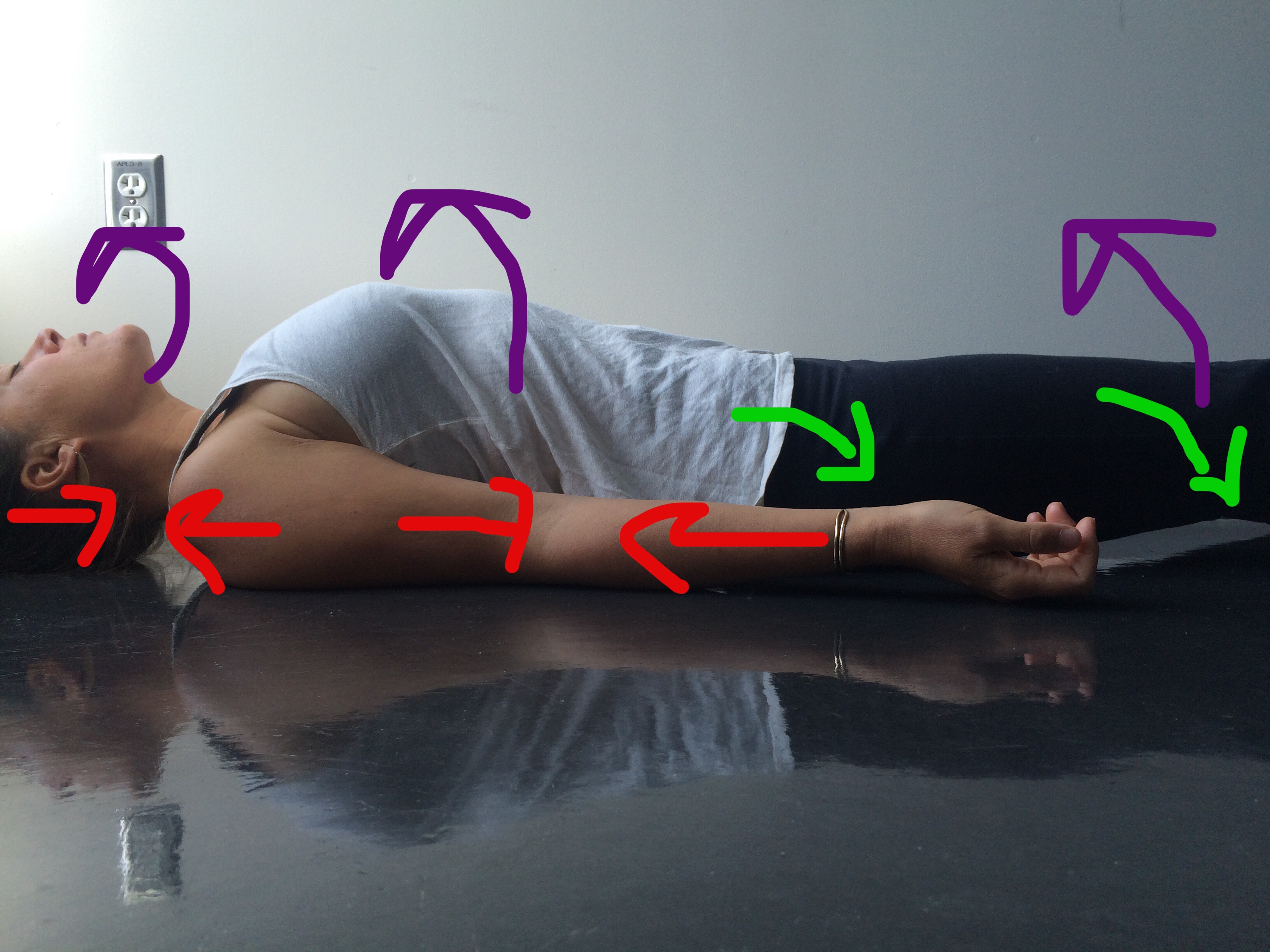 (Aaaaand I’d like to point out that even with all the technological advances of tiny fancy cameras and drawing board apps and special effects of many types, I still manage to excel at creating some of the crappiest visuals around.)

In general, lying on your back requires each of the vertebrae of your upper back to extend a small amount to allow your head and shoulders reach the floor, and the hip joints (located between the pelvis and thighs) to be able to “open up”/extend to 180° to stretch out the legs.

When all the lying down movements can’t happen fully, we can often still reach the floor in some areas but not all. The purple arrows are showing some of the subtle movements that might be going on. If a tight upper spine can’t relax down, the heavy head still drops, overextending the neck as it does so (note the chin lift), and the entire ribcage can rotate backwards, lifting the front bottom of the ribs up in the air (note the ribcage rotation).

Hips that don’t extend to meet the floor might reveal themselves by lifting away from the ground, even though the feet are down (see the arrow on the thighs). Buuuut, your legs are heavy. Even if your hips won’t open, gravity keeps working to pull the thighbones down toward the floor. When overly connected legs do lower, they take the pelvis and/or the ribcage with them (this process represented by the green arrows), which can arch the lower back and compress areas of the spine (the red arrows). This is one of the reasons folks feel better with bolstering underneath their knees when on their back for a long period of time (during sleep or a massage)—it keeps the legs, elevated via tense parts, from lowering. But all of this above is just a technical way of explaining how it’s possible that “lying down flat” is creating excessive flexion and extension (and I'd also say vertebral shear) of the spine in some bodies.

You may have seen these displacements in yourself or, as a movement teacher, in your students. While some parts of the body can access the ground, chins, ribcages, thighbones, and vertebrae will displace in order to do so. Lying flat on command is not possible in many cases; body parts well-adapted to a lack of movement take time to deal with. So maybe relaxing is hard for most of us, only not just in the sense that our minds don’t want to chill out—our bodies aren’t able, structurally, to quickly give way either (and surely there’s a relationship between the two, right?).

An excellent way to address the injury issue is to bolster this move (with blankets or equipment to support the body where it’s not moving), but I like to take an additional step: Replace the move that’s not currently accessible, savasana in this case, with a move that’s designed to change the body in a way that eventually makes the full movements of savasana possible: Psoas Release.

Watch a clip of Psoas Release instruction from Whole Body Biomechanics: Feet, Knees & Hips to learn this move (also find it explained in Move Your DNA!):

Making a swap is sort of like bolstering, but it’s also different. Bolstering is often done to make a move more accessible, but it doesn’t always change why a move is not accessible. It doesn’t always get you to the point where you can do the move with more movement. Our approach is to do both—make a move more accessible and increase your body’s movement—at the same time. We want to create an environment that helps you find (and change) why savasana isn’t working for your body. (And this is just one possible swap—maybe your psoas major parts move well, but your iliacus or rectus femoris or the mobility of the upper spine is keeping you from accessing the floor. In these cases you could pick another move that gives you what you need most.)

This also takes care of another issue long-time readers often ask about: how to fit the corrective moves from our programs into classes of different modalities. If folks are coming for yoga (vs. restoring larger movements to fit into life), try trading out savasana for “psoasana,”** if you see the need in your body or body of students. Psoasana is not necessarily an easier move—it’s simply a move that deals specifically with helping students become aware of any “chair baggage” they might have brought to class, giving them space to experience and address those loads in a safe way, while also working on downregulation and other benefits found in savasana.

Is savasana “hard”? There’s debate, mostly in my mind, about labeling lying down on the ground as a dangerous or advanced move. On one hand, it is very important, so important I’m writing about it specifically, to recognize that lying down is hard in the sense that it’s currently inaccessible to many peeps. This issue needs to be dealt with on the individual and movement-professional level in the form of more complete instruction.

On the other hand, it’s essential we see the relationship between the environments and movement habits we promote as a society, and their effects. This movement is not hard by definition—it could be thought of as a very basic, non-intense or injurious movement. But the situation we’ve gotten ourselves in collectively has made this basic exercise hard for our bodies. So it’s easy in the sense that it’s been widely accessible for humans for a very long time up until this particular culture, and it’s become challenging for this group of humans that have moved in a particular way. We need to pay attention to this phenomenon and understand the origins of our movement difficulties or else we risk eliminating even more movements from our culture because of how they’re perceived vs. eliminating the habits that result in their difficulty. The former approach is one way sedentary cultures can become more sedentary over time.

As a teacher of movement, I believe that more complete movement instruction is not only being able to add bolstering or swapping moves; eventually we need to be able to teach the context and non-exercise portions of human movement too. For example, the Psoas Release (or psoasana) can be used as an exercise to help make other exercises possible, but it’s critical we, as a group, start thinking outside the exercise box. The Nutritious Movement approach is to recognize that there are certain age-old human movements (like lying on one’s back) that in our current society are become less prevalent and, lockstep, we are becoming less able, as a group, to do them. Naturally, these are directly related.

Rather than exercising solely for fitness, you can exercise using moves that can help you restore some of those movements and the experiences they facilitate. The Psoas Release exercise can make savasana more doable and it can also help you lie on the bed or floor more comfortably and successfully. It can help with a good night’s sleep. It can help you take a rest beneath a tree or lie down and look up at the stars. It can help you get under your car to change your oil, and any other fun supine activity you can think of.

Put the Psoas Release anywhere you want. Do it as a standalone (or is it a liealone?) move, or use psoasana as an easy and restorative way to end any movement class. It’s a small move to practice with big benefits.

Nutritious Movement no longer certifies new students (we’re quite busy working on deepening the level of movement education with the teachers we have), but we can still help you understand and teach movement better. Read more about the path we recommend for professionals here.

* The authors note a correlation of an injury to a pose is not necessarily indicative of a cause--it’s tough to name anything as a “cause”--but these were the moves during which individuals experienced their particular issue.

**There’s a range of reasons why yoga teachers end their class with savasana; the suggestion above might not be an appropriate substitution for your programming. This piece is only speaking to the physical shapes of a yoga practice.