This post from 2011 was edited, updated, and expanded in 2020. This is one of a handful of our favorite articles on walking, including topics covering what various “walking parts” do as well as other whole-body considerations. Find the rest of them in the walking section of Our Favorite Feet, Footwear, and Walking Resources. 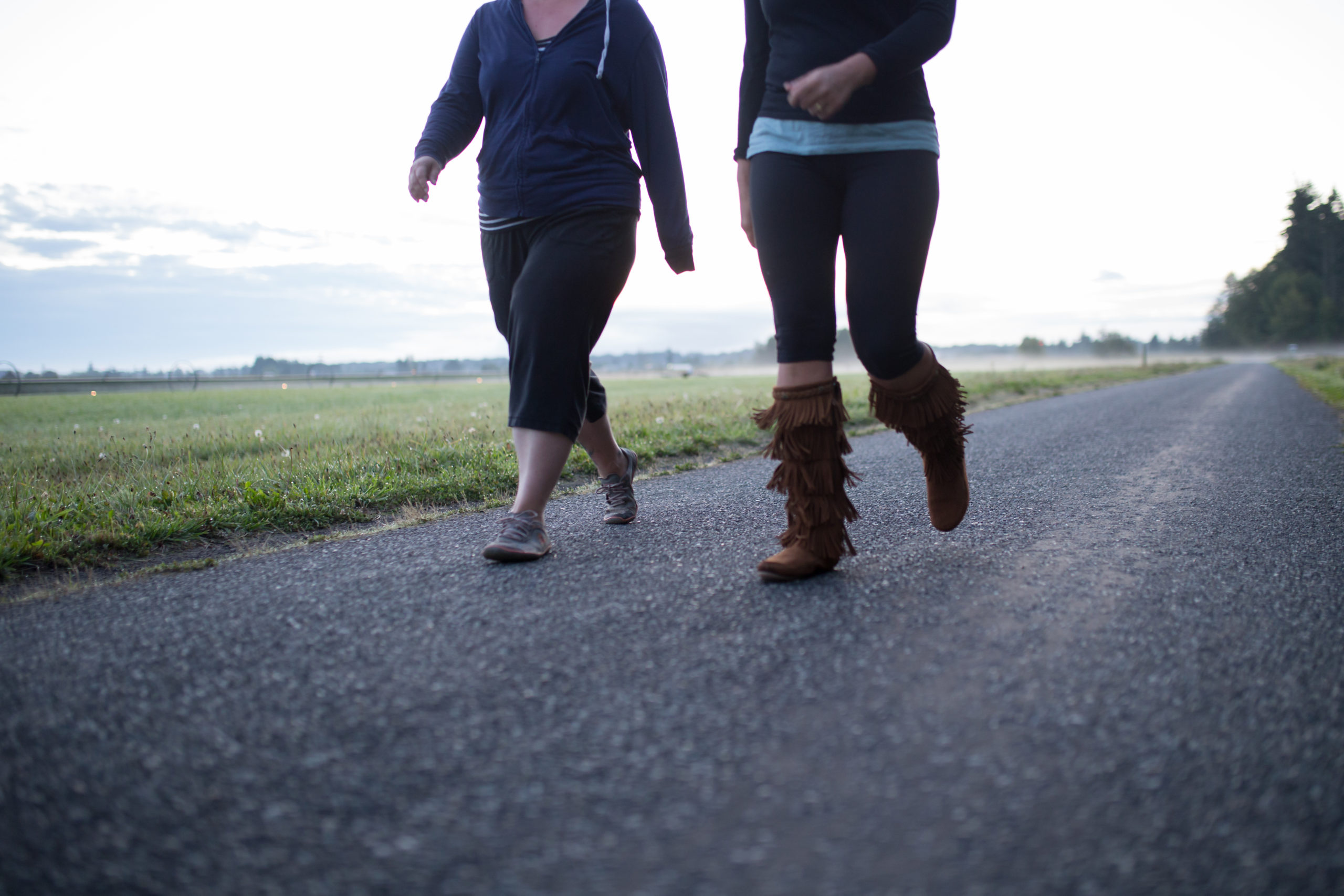 In the last three national-publication interviews I did, the journalist wanted me to explain correct gait for barefoot footwear like Vibrams or Sockwa. I asked for clarification—for walking or running? To which they replied there wasn’t room in the article for the difference. Couldn't I just quickly tell them how to use the new barefoot-shoes correctly? In five sentences? If you know me then you know I have never been able to clarify anything in five sentences.

I’ve also read many magazine articles and blog posts discussing gait patterns, and with the recent addition of barefoot running and minimal footwear, these discussions are popping up more and more often. I wrote this article to help folks better discern information presented in articles on running and walking gaits and to help you understand the biomechanical differences between them, as well as to help clarify the differences between the minimal-footwear/barefoot movement and the running trend and give things context.

Originally, the term gait meant a manner of walking, but has since become used more generally, referencing any pattern of limb (arm and leg) movement while moving on foot. Everyone has a particular gait pattern, or way of moving. It comes from a combination of how one learned to walk as a child by mimicking those around them, a lifetime of musculoskeletal habits, and any injuries thrown in along the way.

Your gait is so specific to you that governments have worked on developing technology that recognizes a particular person from video based on this pattern. Your face you can hide but your gait pattern, not so much.

Walking and running have been specifically defined to avoid errors in research and resulting conclusions.

The clinical definition of walking requires the mover have at least one foot on the ground at all times. Like the baseline movement of any animal, human walking is an efficient process created by the complex coordination of many lever systems that carries the body (or let's say your center of mass in the pelvis) in a smooth, forward-moving line. Inefficiencies would be those patterns that carry your body or body parts in a way that doesn't contribute to that forward motion, but detracts from it. We look for things like torsos swinging right and left; knees that don't bend or bend too much as your weight passes over them; pelves that twist or tilt forward and backward too much, or heads that bob along. And P.S. this smooth walking is what many of our exercises and alignments are all about—how to optimize the movement and leverage of your walking parts so that all of you is contributing to walking well.

The clinical definition of running requires the mover have a “flight phase,” or period of time during each gait cycle where no foot is touching the ground. This means that the center of mass sort of ping-pongs along, accelerating and decelerating in each cycle. But similar to walking, in mechanical analysis you're looking for movements that detract from a smooth running movement or are costly in term of wasted energy or potential energy.

Here is a high-tech side-view image of a center of mass during a more smooth form of both activities to see how they compare in terms of distance and direction travelled. 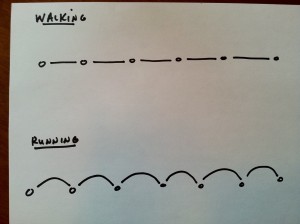 The smooth translation of the pelvis while walking requires you maintain your stance leg length throughout a gait cycle, which uses your lateral hips, glutes, and stance foot, moving through four points: Heel strike, foot flat, heel off, and toe off. If you don’t begin with the heel while walking, it means that you can’t use your posterior muscles to propel you forward, which means you don’t have the natural strength you should have in your gluteal muscles.

Running, due to the much higher G-forces and abrupt changes in whole-body direction (while your net motion is forward, the body has been traveling slightly up and down to get there), requires more force- dampening than walking. This is why, when you run, you should land on the front of your foot so your calf muscles can work eccentrically to slow your crash-crash-crash into the ground.

What are the differences in walking and running forces?

A quick lesson in G-forces:

“G” or gravitational forces are a relative unit, based on your particular mass.

Standing is a 1-G activity. If you weight 160 pounds, then your body needs to control/deal with 160 pounds of force when standing.

Running is a 2-3 G activity. If you weight 160 pounds, your body needs to control/dealing with 320-480 pounds of force while running.

If you are in the movie Top Gun and your name is Maverick, you would be in a NEGATIVE G-Pushover with a Mig 28. Keeping up foreign relations. You know, giving them the finger? Yes, Goose, I know the finger.

{Just in case you were wondering what I was doing between the ages of 12 and 14, this was it: memorizing the TopGun movie so that when I was a naval aviator, I would know how to talk. Really.}

To quickly summarize, while barefoot running mechanics seem to include landing on the toe before dropping to the heel (toe-heel), this does not imply that the same pattern applies to walking. Walking is not just slow running. The forces and movements are different in each. You're much heavier while running and movements that decelerate 2-3 G loads are not necessary in lower-load scenarios. Those movements would be sort of a waste.

I took an awesome hike today. I hope you did too.

*Walking is a very broad category of movements and in this case "walking" has been defined and analyzed by folks that don't walk very much compared to human walking throughout human history, and have taken most of their walking on human-made surfaces and in shoes. How walking looks in a lab or on a treadmill is different than how walking looks (and works) when dealing with uneven terrain and unknown textures underfoot. In short in many cases, say you're barefoot and walking at night through an area you don't know, you will have a different gait patten than while walking through a cleared, familiar area in the day. There are uphill and downhill walking patterns, patterns when you're carrying things like water or children, and there is how we walk with others we know (or don't). In shorter short, walking is a very complex phenomena I'd file under movement ecology. There's not really one "optimal" walking pattern, there's really just "optimal gaits" that depends on the context of time and place. THAT all being said, the smooth gait we're working on is a sort of baseline, so although gait theory can get detailed pretty quickly, you can still find lots of value in working on an optimal set of movements efficient for flat and level walking.