In my book about feet I also talk about bone. I also talk about a lot of other things, but because a big giant high heeled shoe is on the cover, it’s probably always going to be associated with feet instead of whole-body alignment, but that’s OK, because there are a lot of people out there with sore feet.

There is a section in Chapter 3 on why this body position (on the left) is less weight bearing that the picture on the right. 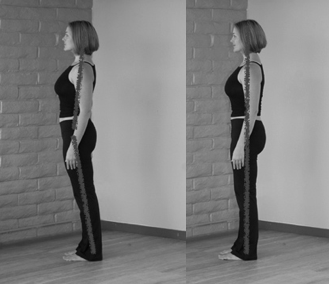 If you’re kind of intuitive in how things “feel” then you might be, oh, right. That makes sense, I can tell the difference. But if you like a little more meat to your theory, when thinking about it, you might be like, Hey! That doesn’t make sense at all. Because I learned that “weight” is just our mass accelerated by gravity. So if my mass is the same and gravity is the same, how could one body position be more or less weight bearing than another?

So, allow me to explain, keeping in mind that I’m going to do a crappy job because I’m going to do it without using a bunch of science-y terms and no equations. So if you’re a theoretical physicist reading this, give me a tiny break. This is a blog about human body parts, and I’m doing the best I can.

Once upon a time “weight” meant mass (how much stuff that makes you up) accelerated by gravity. But when it came time to actually use this theoretical concept, it turned out that where an object was relative to something else was important. Mathematically this is like ?!HUH?!? but biologically it might make more sense: If you are falling out of an airplane your “weight” is about the same as when you are standing on the ground. But these situations “feel” different to the body. And I don’t mean that falling out of an airplane makes you want to vomit or scream or whatever. I mean the way your body interprets (feels or experiences) your weight depends on whether or not something is underneath your feet.

Or if you imagine a single bone --  the way a bone experiences its weight depends on whether it is moving through space, not touching anything or if it is pressing up against something. Once the sciences moved from the more theoretical to the more applied, the term weight and force due to gravity became too ambiguous and confusing for use. So, the definition of weight as we use it today (i.e. I’m going to go weigh myself on this scale) is really defined as the effect of what is theoretically known as weight -- also called the "contact reaction-force against the force of gravity." This is why we measure our weight on scales -- to determine how much your mass is squishing something. The amount of squish determines your weight -- not the other way around. Which is why mathematics often seems obtuse. Which is a geometry joke. Which I hope you got.

Also, this means that weight is really a relationship between a scale and the mass that sits just on top of it. Note: If you're thinking that you're going to start weighing yourself in the morning, leaning your torso 24 inches out in front of your feet to get a lower scale reading know that 1) most bathroom scales are designed to negate this effect and 2) your actual mass, how you look in your jeans, and your metabolism will not be affected in the slightest. But you can go ahead and try it if you'd like.

Possible Reader Question At This Point: This post is boring. Why should I read it any further?

When it comes to bone health, you'll want to keep in mind that how much "weight" your bones experience is calculated based on how much mass is stacked directly above whatever is doing the weighing -- in this case the mechanoreceptors in a particular area. Which is why alignment (that is the position of every part relative to another) is so important. This orientation of parts determines how every other part is loaded.

In my book I define weight-bearing as: when a structure is carrying the full burden of its mass; in the human case, when the bones are holding the vertical mass of the body.

The term “vertical” is an important piece of understanding the weight/weight-bearing/bone generation process.

This is a bone: 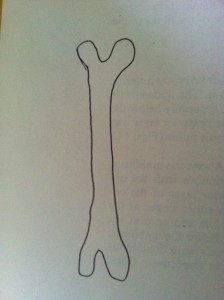 This bone has a center of mass -- that is, a point at which you could balance it on your finger. Or head.

As long as this bone's center of mass aligns with the center of the scale (aka vertically stacked) the weight of a bone equals its theoretical weight (mass times acceleration due to gravity). Or, said another way, if you put the chicken/femur bone on a scale like this: 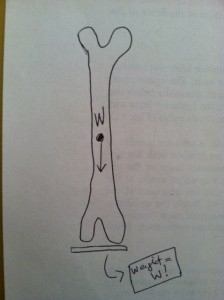 But if you put the bone on a scale like this, where the center of its mass is off to the side of vertical (keeping in mind that bone three dimensional, so this can be off in any direction from vertical) the scale will read a weight that is LESS than its theoretical weight or, less than the weight it had when its center of mass was stacked vertically. 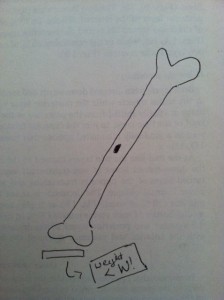 Why? Because a scale can only be compressed, and hence measure, what is directly on top of it. The part of the bone NOT on the scale is essentially in free-fall and not contributing to the weight measure on the scale. Don't get me wrong. The falling bone parts (now creating torque instead of weight) still need need to be dealt with to keep you from falling over -- but now your muscles and connective tissues must work more than they should to create these tensions and your bone is working less. Which means 1) more soft tissue damage and 2) less bone density where you need it. This is what compensating is all about. If your desired end-result is simply not falling over, it doesn't matter how you stand and move. But if your desired end-result is maintaining long term function of tissues, how you stand and move matters more than anything else. 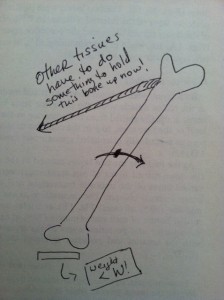 I’ll also have to mention that the size of the scale is important. While weighing yourself in the bathroom might seem like a huge deal biologically (or is that psychologically?), it’s not as important nor is it always equal to the weight you put on your bones. Your bones are filled with small scales called mechanoreceptors. It is the regular compression of these cells that send the “GO BUILD US SOME FRESH BONE, WE’VE GOT WEIGHT TO SUPPORT!” signal. These scales determine how much bone to build in that specific area, based on the weight signals they receive. Which is why “weight-bearing” status is so important to the bones. The less weight you bear, the lesser the density to the bone.

Every bone has its own set of scales because each bone has a unique responsibility of staying strong enough to hold what is (or should be) directly above it. It is the stimulation of these tiny, inside-the-bone scales that not only determines bone density, but earlier on, the shape of the bone itself as well as later-developed pathologies like bone spurs.

Going back to these pictures: 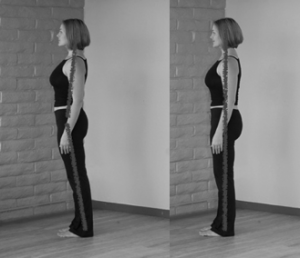 Consider a small scale in the neck of the femur -- aka the most common place for bones to decrease in mass, becoming too weak to hold up the weight of the torso.

The scale in the hip seen in the photo on the right will receive a greater weight signal from the torso, stimulating it to build more bone than in the hip in the left photo. This also goes for standing with your legs wider or more narrow that what vertically aligns the femurs center of mass as evaluated from the front: 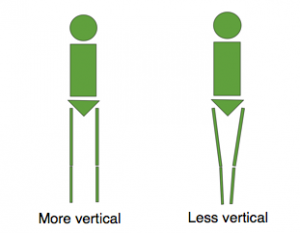 In non-vertical standing habits as well as exercise modalities that use the skeleton in ways that do not offer weight-bearing loads to the bones, the result will be various bones lowering their densities and weight-bearing abilities accordingly. Your bones are not genetically programmed to be a certain density. Rather they are responding to the loads you create and shaping and filling themselves according to how. you. move.

This post would not be complete without mentioning that bone also responds to tensile loads, which are places where the bone is being pulled on by muscle or ligament attachments. When you habitually stand in a non-vertical way, for example, you create very little weight on the bones (especially the hips and lumbar vertebrae) and instead, convert your weight into an excessive tensile load on the lower leg bones (as well as creating tissue tensions and damage all throughout the body) -- which will result in a decrease in vertebrae and hip bone density and often times an increase in the densities of the lower leg bones.

Hey, great! If I take my hip density away but increase it in the lower leg, that's good right?

While that seems logical, alas, it is not correct. Bone density, as a total number, is not important. What is important is the function of bone density. Having greater bone densities in your lower leg will not help your hip hold you up or keep your vertebrae from collapsing when exposed to dynamic movements of your torso. So when you check out studies that say "bone density increased from doing this" you want to read carefully about specific locations before and after and then compare those results to areas that of bone mass that are important as far as health research goes (hips, vertebrae, ribs, and wrists).

What’s this all have to do with you? What is the “takeaway” information?

1. In the search for the “best” exercise prescription for bone density (as well as for all of the weight-sensitive mechanoreceptors) HOW your body is oriented while moving is just as important, if not more, than WHAT you do to move. Consider your alignment and your weight-bearing status when you choose.

or how about, Wanna lose weight? Thrust your pelvis and lift your ribs. Results guaranteed.

{Oh, and if you’re interested in taking the first step to better bones (or knees or hips or your back or whatever your whole-body issue), take a look at what your shoes are doing to you every day and start with these basic correctives! Download a free chapter on footwear and bones here: Click}