One of my favorite college courses was Medical Latin. I loved it because speaking Latin made me think of gods and goddesses, togas and baklava, and riding a moped after swimming the Mediterranean. Which, now that I think of it, are all Greek things actually.

It turns out I love all Greek things and can’t wait until I move to my tiny Greek island/olive tree farm/alignment center. You’re all invited.

Most anatomy/physiology students take Medical Latin at some point in their college career. We take it because we have to memorize hundreds of names of bones and muscles and tissues and functions. And most names are in Latin. Knowing even a little bit of Latin helps because then you don’t have to memorize everything.

You want to know an interesting story? A teaching doctor became  perplexed during orthopaedic rounds. Holding up an X-ray of a bowlegged patient and asking medical students for the diagnosis, he was disappointed to see that 1/3 got the answer right, 1/3 the answer wrong, and the remaining 1/3 shook their heads. They didn’t know. They were confused.

You might have heard of these terms -- knock-kneed and bowlegged. But if you were way smarter and better edumacated, then you would use the terms Valgus and Varus. Or Varus and Valgus, which is my point today.

The doctor scolded his students (I just made this up), told them the correct answer, and then drove home to look up the Latin to find out what the problem was. And here was the problem. Somewhere down the line, the orthopaedic terms had become reversed from the Latin definitions.

Valgus, is Latin for having the knees angled outward. Varus is Latin for bent or grown inward. Shocked that the definitions were the opposite of his knowledge, he checked 24 current orthopaedic textbooks and found that 23 used the reversed terms, and only one made note on the historical vs. current use.

“This particular pair of terms has caused more confusion than any other pair, partly because the original Latin terms had the opposite meaning to that which is now universally accepted.”- The doctor guy.

And, if you were worried that this guy did a lot of hard work for naught, don’t be. He wrote a paper on it and got it published in The New England Journal of Medicine. Nice!

Now I’m going to tell you how the terms got reversed. I can do this because I am a huge nerd and have my very own copy of The Lexicon of Orthopaedic Etymology. I know you’re jealous.

In the original definition, the terms valgus and varus referred to the position of the joint. So, using the Latin definition of valgus, the bent outward knee would look like this: 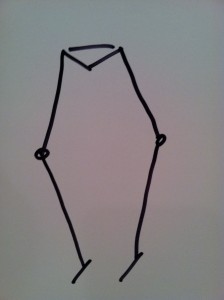 And Latin definition of varus would look like this: 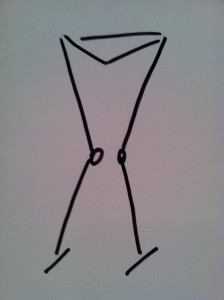 And here is another picture of some Latin: 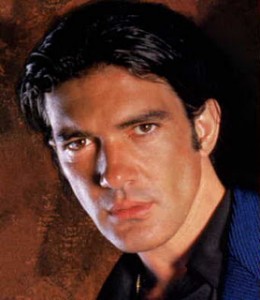 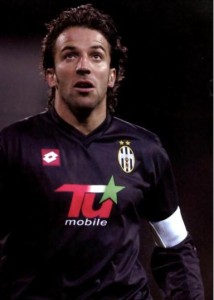 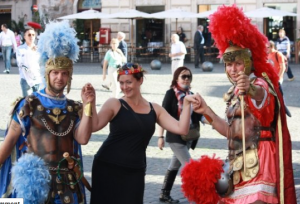 Anyhow, at some point, someone translated these terms for a modern orthopaedic text. Instead of the definition referring to the joint, they applied it instead to what the lower segment of the leg (shin bone) was doing.

Replacing the word "knee" with "lower leg", the new definition for valgus read having the lower leg angled outward which, of course looks like this: 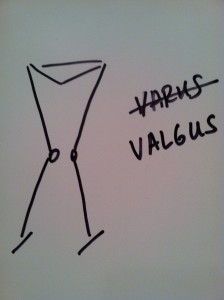 By accidentally changing one word in the definition, the meaning was reversed. Crazy, right?   A Katy factoid: I love the science of semantics.  I feel that a huge breakdown in health and wellness is that students have not learned anatomy in the most correct way, but have memorized the smudgy modern version instead.

Anyhow, his paper calls for the elimination of the varus and valgus terms altogether, as they are used incorrectly. The doctor's paper also suggested using the uber-clear terms Bowlegged and Knock-Kneed to keep everyone on the same (and correct) page.

This also makes me feel better as a patient. Say I had one varus and one valgus leg and needed the varus one amputated.

WHICH ONE WOULD THEY TAKE? 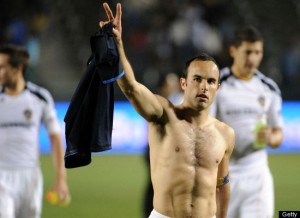