Someone sent me this article, Vaginal Birth Tied to Pelvic Muscle Weakness,  perhaps to see if I would poke a fork into my eye. I didn’t. I decided to write this instead.

But first, some fun facts:

Did you know that the average diameter of the molded fetal head is 9 cm? Even the cranium of the soon-to-be-big-headed baby folds up (neat!) into something that is 20% less than actual diameter length while in the birthing tube.

Did you know, the average urogenital hiatus, before pushing out le bebe, is 2.5 cm.

Urogenital hiatus sounds like one is taking a break from the genitalia of France, Germany, and Sweden, but it's just a fancy word for the space created by the pelvic tissues making up genital canal -- or, when you're birthing,  the tube of descent.

If you divide 2.5 by 9, (or wait, is it 9 by 2.5?) our levator ani (see the pelvic model below) ends up with the stretch ratio of 3.54. Meaning this tissue lengthens 3.5 times its resting length in order to let the baby through. 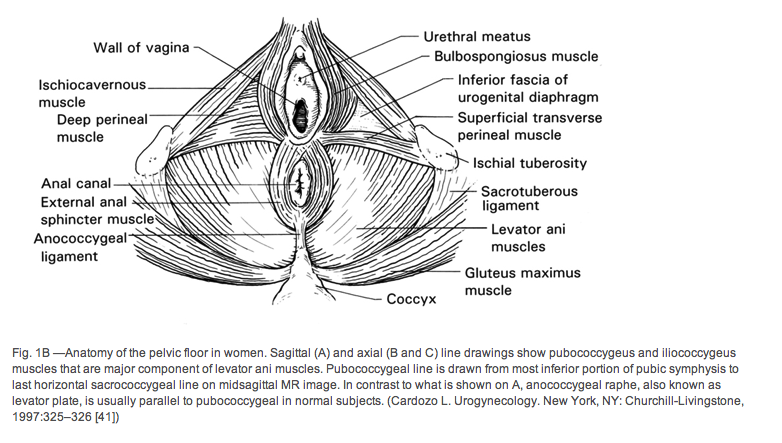 On a side-(but-kind-of-related)-note: These are the pants I wore through both my pregnancies, during which my waist went from approximately 28 inches to 3500 inches. That’s a stretch ratio of a billion and something. 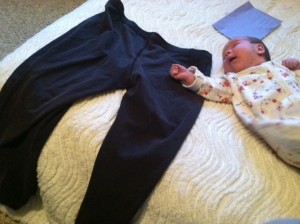 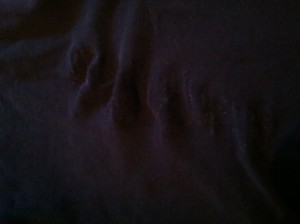 And an even better image.

In addition to being an excellent speller, I am a fantastic photographer.

As you can see, the amount of stretch placed on the material exceeded the abilities of the elastic, which caused the elastic to break down.

Even though skeletal muscle is elastic like the pants, muscle can only stretch so much before failing. You don't have to worry about the vaginal muscle failing though, because it appears that the vaginal tissue can handle the load under natural circumstances.

Which brings me to the article.

I went and found the research the article was referencing. Which wasn’t easy because journalists never remember include the title of the article (grrrrr), which makes it a bit tough to find. In the end, I actually found two articles by the same author looking at the same group of women over a long period of time.

So here’s the deal. While the internet article reads Vaginal Birth Tied to Pelvic Muscle Weakness, it should really read Operative Vaginal Birth Tied to Pelvic Muscle Weakness. Yes, women who had c-sections had "stronger" pelvic floors then those who delivered vaginally. But when the type of vaginal delivery was considered (i.e. were there any interventions like forceps, or episiotomy, or vacuums), it turns out that vaginal delivery wasn't the issue. The greatest association was between pelvic floor disorder and Operative Vaginal Birth not Spontaneous Vaginal Delivery.

Why? In an object-free delivery the pelvic tissues are already stretching to maximum capacity. So that little *extra* stretch for forceps and their movements, you can see how one can easily exceed the tissue’s limit and leave them stretched beyond the point of no return. Just like my pants.

Which reminds me, I need new pants.

But some of the good news from the other article is this: Pelvic floor “strength” is not necessarily associated with pelvic floor disorder. In fact, in this study, the cesarean group with the most Pelvic Organ Prolapse had the “strongest” pelvic floors. Which means a much much better title for the article should be Operative Vaginal Birth Tied to Pelvic Muscle Weakness, but Pelvic Muscle Weakness not Tied to Pelvic Floor Disorder and Tied Much More to Operative Intervention.

And one more thing. The pressure devices used in these (and many other) studies to measure “strength" are really only measuring tension. That do not measure force production, which would be required to tell if someone was stronger or not. Using this measuring device, someone could read as “super-strong” and really only be “super-tight.”

And one more thing after that. I'll really try to refrain from pointing out that the C-section group was also the tight/strong pelvic floor group. Chew on that.