If you're interested in reading more on ideas presented in the article below, I suggest reading Alignment Matters.

I’m back from three weeks on the road and boy is my iliopsoas muscle killing me.
Just kidding. There is no illiopsoas muscle. So why did we start calling two different muscles, that happen to share an attachment, by one name?

I’ve explained it more thoroughly in Can This Psoas be Saved (click), but in short, back in the 1950s, John Basmajian, the father of electromyograph (EMG) science, argued that the iliacus and psoas muscles could not be expected to have unique functions because they share a common lower attachment site. His opinion triggered widespread use of the term iliopsoas, stripping each muscle of its individual identity and setting the precedent of misattributing iliacus EMG measures to the deeper and more-difficult-to-read psoas muscle.

It is now 2014 and we know a lot more, about the psoas, the limitations of EMG, and biomechanics in general.

The problem with grouping stuff into simple categories (like calling both the ilacus and the psoas muscle “hip-flexors”) is that, when you go to create corrective protocol (like undoing hip-flexor tension) you could be barking, or stretching, up the wrong tree.

For example, the psoas muscle attaches to 22 (sometimes 24) different structures in your body, most of them vertebral and vertebral disc connections. The lowest two attachments are on the thigh bone. Your psoas is psoa much more a spinal mover (or stabilizer in some cases) than it is hip mover. And a lot of the time (especially in chronic sitters) two tight psoa extend (and shear forward) the lowest thoracic vertebrae and the rib cage while simultaneously flexing the lower lumbar spine while tucking the pelvis under via the thigh bone moving forward.

But the psoas (unlike actual hip flexors) doesn’t tilt the pelvis anteriorly, it tilts the pelvis posteriorly relative to the ground.

To further complicate things, your tight hip flexors, like your iliacus and rectus femoris, could be tilting your pelvis anteriorly relative to your thigh 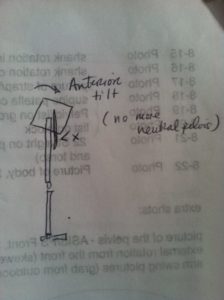 but at the very same time, your psoas could be post-tilting your pelvis (relative to the ground) while keeping the same degree of hip flexion as created by the hip-flexors. 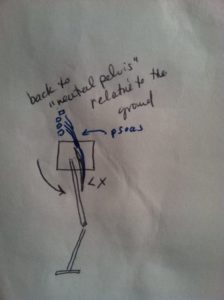 In which case your pelvis might measure “neutral” relative to the ground, but your femur fixed out in front of you. Which means that the primary reason “neutral pelvis” is desirable -- "neutral" maximizing the weighted, push-back phase of walking  -- isn’t available. 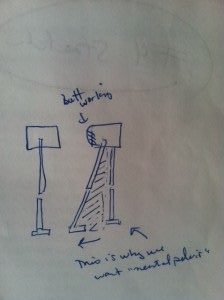 "Neutral pelvis," separated from other neutral parts, and separated from movement capacity, isn't worth a damn. Alignment is not about position. It’s about your body's ranges of motion and how those ranges of motion line up with the gravitational force. If your hip can’t extend because of hip flexors' tension, your glutes and lateral hips are physically prevented from working while you walk. And P.S. Your pelvic floor misses its restoration team.

So. The moral of today’s story is, calling two muscles that do entirely different things by the same name makes it confusing when trying to figure out what’s going on in your body.

The other moral of today’s story is, calling the psoas a hip flexor is incorrect (and confusing) because the psoas not only does the opposite of what hip flexors do, it can also distort the vertebrae and move the rib cage wonky. And why would we want to put a muscle that can distort the spine and the upper part of the body into the HIP category where no one can find it when their back is hurting?

The other moral of today’s story is our anatomical reference system has become so sloppily used that we often refer to motions that are relative to the ground with terms that mean “relative to the joint.” Which is confusing. And incorrect.

The other moral of today's story is, I just met my first "fan" out in the whole-wide world. There is nothing stranger than having someone say "Are you Katy Bowman?" while boarding a plane. I'll never forget you, Dawn! 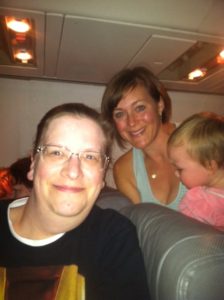 This was a milestone day and it gives me strength to keep on creating content because I know that you, (and you and you and you!) are finding it valuable.

"There is no such thing as an iliopsoas muscle." - Stuart McGill.

*If you don’t have a strong grasp on the difference between the concepts of relative and absolute, this is where you might begin.