This post from 2012 was updated in 2020. For more of our favorite pregnancy resources, check out Moving Well During Pregnancy. 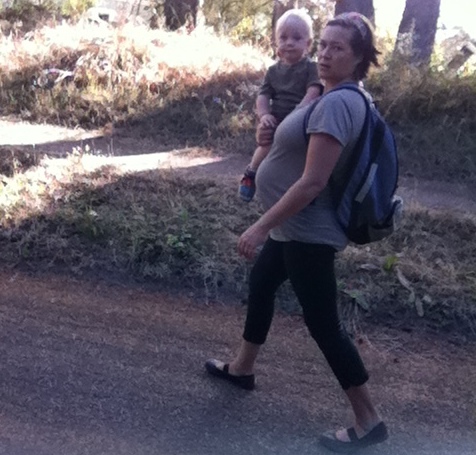 I'm often sent questions about pregnancy and posture and what I think I think about various advice. On one hand, what I think matters less than what you think. On the other, I realize that what folks are often asking for is more information to interpret this advice for themselves. So that’s what I’m trying to give.

1. When you are standing, the body’s center of mass lands somewhere in the pelvis. 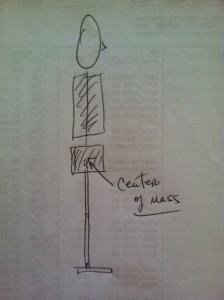 2. In order for the mechanoreceptors of the body to fully adapt to the load, the body needs to be vertically stacked, which means keeping the pelvis neutral, on a vertical leg, over the ankle, blah blah blah you’ve heard me say this a bunch of times.

3. Clearly, when pregnant, you will accumulate the additional mass of the baby, some of which will end (way) out in front of you. Clearly. 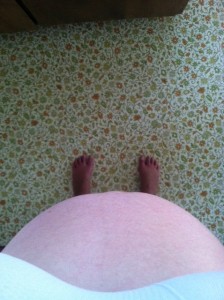 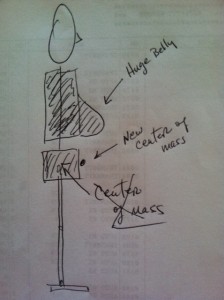 Which means that now the center of mass of your body is forward to where it was before.

To some it make senses (at least to the creator of certain infographics) that to balance this new mass you should slightly bend your knees and tuck your pelvis under to balance things out.

I just wanted to point out that the premise everyone has agreed upon to this point is that being pregnant dictates that your center of mass has moved forward. Or maybe it's that the natural mass accumulation of pregnancy is all on the front. But is this the case?

We cannot deny that there is more mass now on the front. And we cannot deny that it needs to be supported. The question is, does that support come by dragging the entire skeleton (and organs) into a new alignment during this period of time or are there other growths in the body that are necessary to the ecology of pregnancy and parenting?

Picture this. You’re getting heavier every day but you’re walking around with this extra mass. A lot of walking, like 3-10 miles every day. And you’re going up and down hills (not just walking a track) and you’re carrying stuff. And squatting to pee. And more importantly, getting out of the squat (groan) when you’re done. And also getting up and down off the ground a bunch of times. You’re getting stronger, right? Which means that you’re increasing the mass of your muscles—including the muscles down the backs of the legs,  those that propel you forward with each step (so, 10,000 leg strengthening reps per day).

And if we add this backside: 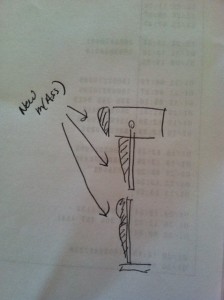 We get a center of mass 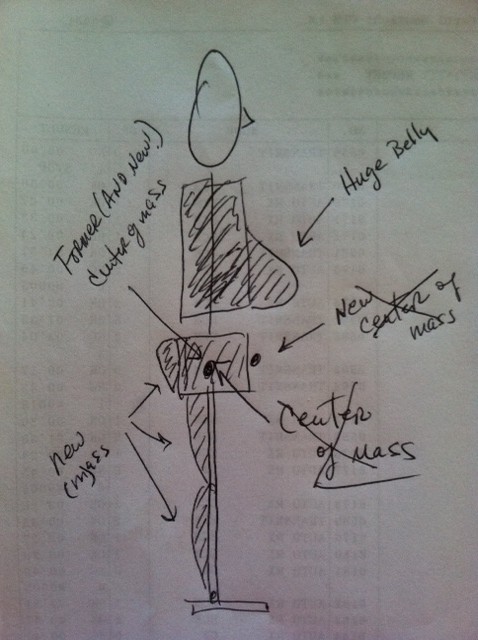 more similar to before this whole pregnancy party got started.

So when you ask what I think of recommendations that have us distort our skeletons to mitigate the “natural center of mass changes brought on by pregnancy,” I'd say that these recommendations are based on a narrow, sedentary culture perspective.  Of course, in many cases folks aren't interested in moving more as much as tending to the immediate issue at hand--discomfort, in this case. But even in the short term, I think the adjustments we make to be more comfortable often lead to more discomfort down the road. Like:

1. Slightly bending your knees all the time tenses your quads and increases pressure under the knee cap.
2. Slightly tucking the pelvis can place excessive pressure on the sacrum (ow) during sitting and minimizes gluteal contraction (and therefore development) while walking. It can also increase tension in the pelvic floor.
3. Tilting the pelvis also tilts the parts inside, and the mechanical environment of the uterus matters.

I'm all for making quick skeletal adjustments (see Mind Your Pelvis While Pregnant), I just think there are better ones to make as well as dynamic habits to cultivate alongside those shifts.

But what I think isn't as important as what YOU think, and why.