Mechanics:  In the fields of physics, classical mechanics is one of the two major sub-fields of study in the science of mechanics, which is concerned with the set of physical laws governing and mathematically describing the motions of bodies within a certain boundary under the action of a system of forces.

Biomechanics began at the beginning.  Not the beginning of the century, not the start of the Christian Era, nor did it bloom from the Ancient Olympics.  The movement forces began with life, as the very definition of “life” includes mechanical concepts of Work (movement):

The property or quality that distinguishes living organisms from dead organisms and inanimate matter, manifested in functions such as metabolism, growth, reproduction, and response to stimuli or adaptation to the environment originating from within the organism.

As long as living things have been moving, they've been biomechanic-ing.

The written history of biomechanics is generally recognized to begin with a series of Aristotle’s essays De Motu Animalium (Movement of Animals), in which he uses the mechanical concept not-yet-termed Ground Action Force as a starting point to deliberate where movement comes from.  The body?  The spirit?  Good questions. 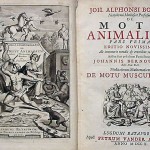 Biomechanics as a United States university program began following the First World War.  The carnage of mass armies, and increases in technological and tactile styles resulted in tens of thousands of amputeed soldiers.  These weren’t old men who could live out the rest of their lives with a peg for a leg.  These men needed to start and support families, take over a family businesses, and fully participate in the country they had just defended. The use of heavy explosives created a situation in which military technology had exceeded medical technology.  Medicine had to adapt.  In fact, they were fairly obliged to help.

Designing a prosthetic wasn’t a medical emergency, or even a chemistry problem, so doctors had to turn to mechanical engineers in the University system for help.  Engineers took a look at the arm or leg from a mechanical perspective and attempted to create a more functional replacement.  At this point, Biomechanics became a University study option for mechanical engineers.  This was the first marriage between the biological and physical sciences, previously separated, and required a mastery of anatomy, physiology, physics, and mathematics.

As the effects of the Industrial revolution set in, Americans became more and more sedentary, which gave rise to the concept of “exercise” - moving all at once to make up for the fact that daily movement was decreasing.  Fifty years later, biological movements, i.e. walking, squatting to birth or poop, flexing, extending, and rotating all joints on a regular basis, had decreased to the point that populations at this time had no handed-down knowledge of how people moved before they didn’t.  (If you watch Disney’s WALL-E, you will see a projected version of this phenomenon).

Around the 60s and 70s, programs of KINESIOLOGY (technically the collection of knowledge about movement) began appearing in University curriculum, but were really incorrectly named.  This curriculum should have been called SPORT SCIENCE, as the programs contained the collection of movements used in modern athletic and sport related activities and not science of the movements humans have been doing for the last 200,000 years.  Biomechanical programs, following the trend of Kinesiology, have since focused the bulk of curriculum and funding to study “exercise” instead of movement, and athletics (golf, golf, golf!) instead of health.

In both Aristotle’s writings and Isaac Newton’s equations, full stability (a fixed point at each joint) gives a human being the ability to live using every single one of their muscles - all 600 of them.  But the lack of moving for years (or collectively, for a couple hundred years) has left us using only a few joints over and over again, with the rest sitting dormant and inert.  Leonardo da Vinci would say that the result would be decreased output and function of the machinery.  Aristotle would say that one’s spirit and life force is unable to express.  Both would probably be correct.

But, as Bob Dylan says, the times, they are a-changin’.