Did you see this article on breast cancer, To Revert Breast Cancer Cells, Give Them the Squeeze? You should read it because it’s important.

“We are showing that tissue organization is sensitive to mechanical inputs from the environment at the beginning stages of growth and development,” said principal investigator Daniel Fletcher, professor of bioengineering at Berkeley and faculty scientist at the Berkeley Lab. “An early signal, in the form of compression, appears to get these malignant cells back on the right track.”

Click (here) to watch a video of a TED talk that gives a general overview of some of the procedure used in the experiment.

I wasn’t going to post on this topic because of the time necessary to give a good enough explanation BUT I had just written about this for my next book, so I can justify the time to cut-and-paste:

“If you attended high school in the last 100 years you were probably presented with a cellular model that states, basically, that a cell’s nucleus contains all the information necessary for cellular replication, with the genetic code (DNA) determining the outcome of a cell’s behavior. Following the tenets of this model, the state of every tissue made up of cells, and every organ made up of tissues, and every system made up of these organs is dictated by your DNA.

After more study, however, it was observed that simply having a particular gene didn’t automatically create a fixed outcome. This means that you and your neighbor could both have the same gene on your DNA strand linked to breast cancer, for example, but only one of you has cancer. The fact that genes behave differently, despite the notion that genes contained a final blueprint for the way they act, led to a new field of study: epigenetics, a field of biology trying to deduce how a cell’s environment can affect the behavior of the cell itself.

By assessing the mechanics at this minute level, we can better understand that the body is shaped by the movement of both gross whole-body motion and the movement of individual parts. Every cell, much like the human body itself, contains a rigid network (similar in function to our bones) called a cytoskeleton. Findings in cellular biomechanics demonstrate that the deformation of the cell itself, the load placed on the cytoskeleton, affects each cell’s behavior.”

Just as a geneticist is fascinated with genes, a biomechanist will be fascinated by the mechanosensing cytoskeleton. Unfortunately, information on the cytoskeleton is not typically included in cellular imaging.

Evidence A: A drawing of a cell, done by Ms. Katy Ann Bowman, age 10. No cytoskeleton.

Evidence B: A college-level Anatomy & Physiology book, 2000. No cytoskeleton.

This will probably change in the future. Best quote ever, swiped from Ms. Altman from the Vital Gaitway: “I'd like an updated revision of my expensive biology [textbook] that illustrated organelles with smoke stacks and postal hats.”

The concept that a cytoskeletal load can change genetic expression (1,2) is not new -- it’s only new to cancer research. For example, studies looking at the effect of exercise on the cytoskeleton within many tissue types show intra-cellular adaptations to the proteins that make up the cytoskeleton of a muscle cell, thus changing its shape and behavior.

Does this cancer article, showing that the compression of cells can alter cellular outcome, mean that we should all start squeezing our breasts? No, not necessarily, and here’s why: Every cell’s job is different, which means the “right” load to every cell is unique. This load is not only unique to each cell or cell type, it’s also unique to each person. To try to simulate this necessary load by man-handling (HAHAHAHA) your breasts isn’t really feasible -- load is a very specific thing. For every load there are seven qualites that affect cellular outcome: magnitude, location, direction, duration, frequency, variability, and rate. Your squeezing is probably not refined enough (let alone not frequent enough) to generate the environment  the breast would be creating on its own, naturally.

I can totally see someone creating a CRUSH THE $#!T OUT OF CANCER bra or a new machine that hooks itself under your arms and gives you a 20-minute shaking. Which isn't to say that these wouldn't work, only that it's unlikely. But let's not focus on what the info doesn't say, but what it does. The mechanoenvironment in which your breast cells live influences how they behave.

So what type of environment should they be living in? This is tough to say as there is no way to measure all the loads and all the individual outcomes. What is easier, perhaps, is the approach used in evolutionary medicine/biology -- that is, our body behaves "best" when under the same loads as experienced while we were evolving.

The issue with affluent ailments such as breast cancer is that incidence correlates with modern behaviors. This is why evolutionary medicine/biology researchers are calling for a return to “more natural” behaviors. Medicines and surgeries cannot bridge the gap between the cellular experience of modern habits and ancestral habits.

What you can do is begin assessing the environment you are creating for your tissues and consider the difference between Nature's loads and the loads you personally experience.

Natural loads created by the breast include:

When you consider how we’ve altered the loads to our breasts via bras, heavy computer use, lack of arm movement in general, purses, stress-induced neck and shoulder tension, anxiety breathing, etc., it is easier to see how breast cells could potentially lose their bearings.

Loads to the cytoskeleton give a cell context by which it selects its behavior. Unfortunately, research like what I’ve referenced here very rarely transfers into therapy. Cytoskeleton loads can’t be induced externally because they are specific to the individual. Larger breasted women would naturally create larger loads and need larger loads to get the appropriate cellular adaptation and therefore function. Maybe this is one of the reasons that bra use and breast size have been indicated as risk factors for breast cancer, as has exercise habit.

Would I recommend taking off your bra? Probably not, especially if you’re large-breasted. In the same way I don’t recommend people take off their shoes and jump into negative or minimal footwear, I do not suggest you take off your bra and jump into, well, jumping I guess.

Here’s what I do suggest, not to "avoid cancer," but to improve all functions of the breast:

If you're not already, sleep without a bra. And, if you wear a super-stiff one, I suggest you switch to something with slightly less support for at least a portion of the day. Over time (the larger the breasts and the longer you’ve been wearing a bra, the more time) you can reduce the support to slowly introduce the load of the breast to the breast tissue.

Hook your fingers underneath the front of your armpit wall. What does it feel like? Flaccid? Start to move your arm around and see how the load to the tissue changes. Historically, you would be using your arms with much greater frequency and varying loads throughout the day and a lifetime.(Read more on your armpit hole here.)

Start using your arms more. If you're already "exercising" your arms, think of all those variables I listed and try to evaluate how many different positions your shoulder takes on, the loads you carry, how often they are unique, etc. Arm swing while walking or running is good, but it's just one range of motion. Imagine reaching and lifting your arms (the ribs would need to stay more or less in place to really load the breast tissue) and then doing all of movement with varying weight.

Take care of any adhesions that limit shoulder movement. If you have tissue that sticks to itself, even if you load a part, that load doesn't transfer naturally to the stiffened area. Cells, in this case, are essentially deaf. They cannot "hear" loads beyond the border of the adhesion and then duplicate without the benefit of a compass. I just posted on foam rolling but am currently in love with Jill Miller's therapy balls:

Although yours might not have a million cute teething cuts in them. 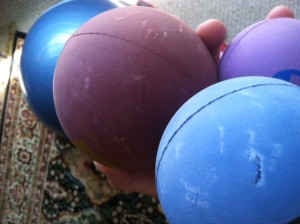 Make no mistake, in the end outcome is always the result of every variable. This is one of them.

P.S. Here's a note from a ten-year old Katy, highlighting the importance of language. (This post is dedicated to Penelope Jackson.)