This morning’s conversation between me and The Husband:

KB: Someone wants to know about Nursemaid’s Elbow.

KB: It’s an injury to the elbow -- one of the bones in the lower arm dislocates in little kids when you pick them up or swing them around, etc.

TH: Why do they call it Nursemaid’s Elbow? It would seem that a Nursemaid’s injury would come from a cow-nursemaid incident. Like being kicked.

KB: What are you talking about?

TH: Because nursemaids are getting the milk from the cows.

KB: No, nursemaids are “maids” in the “nursery” -- they were probably the ones picking up the kids the most back in the Victorian days.

TH: No, I’m pretty sure they milk cows.

KB: Well, I’m obviously going to have to blog about this now, mostly because of this conversation.

KB: Yah, I’ll be sure to let everyone know.

This is not the first time someone has asked me about this injury as it’s not uncommon, which would seem to contraindicate some of the upper body movement recommendations (hanging and swinging) made in other posts. It probably came up today because this weekend I posted a picture of our recent additions to our indoor monkey bars -- rings and a rope -- for the little man of the house, who is just now 17 months old. 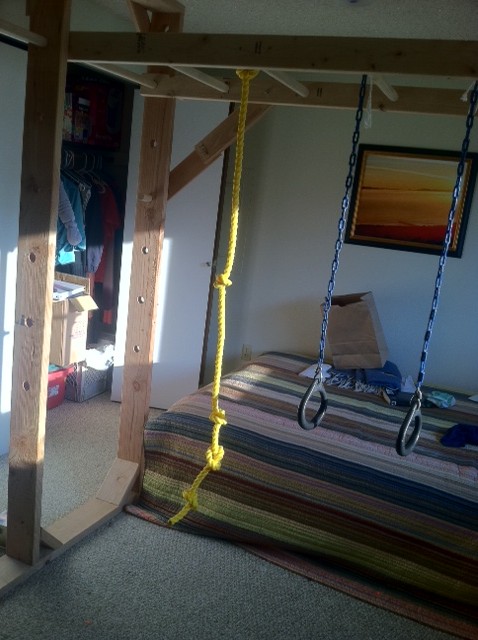 To further explain the injury/paradigm, you can check out this graphic: 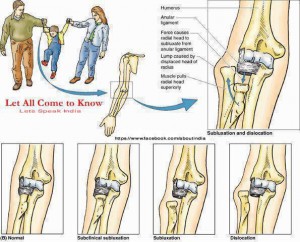 So, the question is, can a child's arms safely support their own weight or not? The answer is it depends on what "a" kid has been doing for all the days of their life.

I realize that MOST people don't have degrees in Exercise Science but I also think that MOST people understand the basic exercise/adaptation rules. In order to get stronger, you have to use your body. And when you start, you begin with a small load and slowly adapt (get stronger) and continue to slowly increase the load as you slowly improve physiologically. You know that, right? Or, are you the person who starts your New Year's fitness resolution off with a four-mile run, a mean stress fracture followed by a seven-month recuperation? Cuz that happens a lot too.

Anyhow, I truly believe that you *get* how adaptation works. You just need to apply this concept of appropriate loads and adaptation time.

To consider: What have most kids under age 3 (or age 1) been doing in terms of their upper body strength thus far? Probably not that much. They've been sitting, lying down, getting the ever-coveted tummy-time, being slinged and slunged and stroller-ed and transported and maybe they've started to crawl or walk. But none of these things aid in developing the upper body strength-to-weight ration. In other places in the world, where people have to move a lot more every day, kids (and babies) are responsible for pulling their own weight. Literally. Which is why, in addition to the walking reflex I wrote about last week, there is also the gripping reflex. Why do babies come with the gripping reflex? Who knows for sure, but if you cultivate it, you get babies who can pull themselves up, hang on to hair, etc. pretty early on.

So a kid can hang and swing safely, or not? It depends. A 2 or 3-year old who's never hung from his own arms doesn't have any muscle to support his body weight, which then transfers this weight load to the ligaments -- which are not designed to withstand it (sliiiiip). But if you take a 2 or 3-year old who has been doing this sort of thing since being a few weeks (and 9 pounds) old, then watch out! They quickly become little circus performers. And, P.S. You can apply this entire post to adults as well.

What's this all mean? It means Be Smart. If you've never asked your kid's arms to hold her entire body weight before, then grabbing her and accelerating her around probably isn't a super-hot idea. Despite the generalization, kids really aren't little Gumbys. Their bodies follow all the same laws that yours do and the sooner they develop muscle the better. They just need to start with an appropriate load and need time to adapt.

If they'd been hanging every day as they went from seven to fifty pounds of body weight, they'd have the perfect amount of muscle for their own mass. But to expect a 50-pound kid to be able to hang (or swing, which takes way more muscle mass and joint mobility) right off the bat is not a realistic physiological expectation. If you didn't start young with your kids, don't worry about it. Just start at the appropriate level. Let them start on a low bar and pick one leg up. And then the other. And then both, but just for a second. Maybe they are held by you and you slowly reduce your support over time, giving their tissues time to adapt. You gotta Think.

If you're going to try things with your kid, here are some things to consider:

1. Don't yank on your baby. There's a difference between you pulling on your kid and your kid pulling against something fixed. When you provide just enough resistance for their muscles to generate leverage, you ensure that the child only experiences loads that they create themselves. When you pull up on a child, you generate the load -- which isn't good -- because you have no idea of your force generation and how it relates to their current abilities.

2. Pay attention. You don't know how fatigued they are -- only they do. Our "sessions" were just after a feeding and lasted maybe a few minutes tops. Signs that typically mean Let's Do More! include them eagerly pushing with their legs, reaching towards you, or if you can feel them trying to pull you. Signs that typically mean Enough Already! I'm a Baby, not a Machine! are eyes that look away or limbs that are dropped and relaxed. Teaching a few baby signs like "More" and "All Done" also help a ton with communication.

In closing, here are my comments on injuries Nursemaid's Elbow and graphics like the one posted: Continuing to see injuries like Nursemaid's Elbow (and most injuries/ailments) as a flaw in human biology as opposed to the result of modern human behavior results in a decrease of human function and health. It also does little to identify WHAT'S REALLY HAPPENING*. And while the graphic is correct in implying that the current state of our children’s bodies is atrophy to the point of not being able to do movements like hanging and swinging safely, it also leaves off the most important guideline: PLEASE REMEDY WEAKNESS RIGHT AWAY BY TAKING THESE STEPS. Or something like that.

But you're working on it, I know. Which is why you are awesome.

A final video, "Rings, Day One." Kid, 16 months old. Rings, $4.00 score at garage sale. {Note: In addition to allowing my child to potentially dislocate both his arms, he is also neither wearing pants or shoes in this clip.}

*WHAT'S REALLY HAPPENING? Our lifestyle has resulted in physical atrophy at all stages of life to the point that we are physically unable to support ourselves and are suffering the physical, psychological, and spiritual issues that come with tissue destruction.