I like to help people think about their body in a slightly different way.

I also like to help people understand their body a bit more.

I also realllly like pelves. Which is the plural of pelvis, and looks like it would rhyme with “elves” but it’s pronounced pel-veeees. You can also say pelvises, but you can’t (correctly) say pelvi because Latin words that end in “-is” are pluralized (a word? probably not.) by adding “-es” or, in English by adding “-ises.”

Another fun use of this plural rule is when you are speaking of more than one penis. Which probably happens a lot. I don’t like penes, because it just looks like a lot of things to write with, which is why I like to use penises. In a sentence, I mean.

This grammar lesson brought to you by someone who had to spell-check the word grammar.

Working on another project, I stumbled upon this memory. In high school trig class, the teacher drew a cosine wave that looked like this: 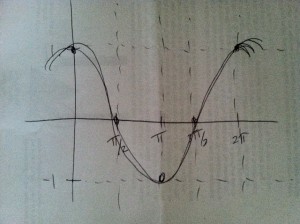 Then she said, “Class, what is this?”

Really, I did. And I have no idea why as I had never even seen a uterus at this point. I was what, 15 years old?

Speaking of the uterus, many people have issues with their uterine position i.e. it's too low (prolapse) or tilted from where it should be. Pelvic floor strength and overall pelvic position are extremely important in these scenarios, but not more than this tidbit: Your uterus is attached to your sacrum. Which means that the position of your sacrum relative to the ground (your habits of positioning your pelvis sitting, standing, and walking), and the position of the sacrum relative to the pelvis (determined by the force production of  the gluteal and pelvic floor muscles), can absolutely affect what your uterus is doing. If you're trying to fix a prolapse or work on organ repositioning, do not ignore the fact that your uterus is like a puppet on a string (the uterosacral ligament) in the hands (the sacrum) of the puppeteers -- the pelvic floor and the glutes. The habit of wearing a tucked pelvis all day creates a droopy puppet uterus, susceptible to chronic malpositioning.

Moral of the story: Don't ignore the sacrum in your quest for pelvic health. If you're hoping to lift a crumpling puppet from underneath (via a lot of pelvic floor work), talk to the puppeteer about it. "Lifting" is usually done from above -- the stage doesn't lift the puppet as much as support it.

Where to start? Stop sitting with your sacrum slightly below you (imagine that puppeteer slightly below the puppet) and adjust it until your pelvis (and the organs inside) are in the more favorable position of neutral:

Read up on Too much pelvic floor tension and not enough glute strength, and then do the exercise in this post a lot today (Get Your Butt Here).

Have a great weekend, puppeteers!