This article from 2011 was edited in 2020 to update terminology and resources as well as add images. Want more on pregnancy? Check out our favorite articles at Moving Well During Pregnancy. 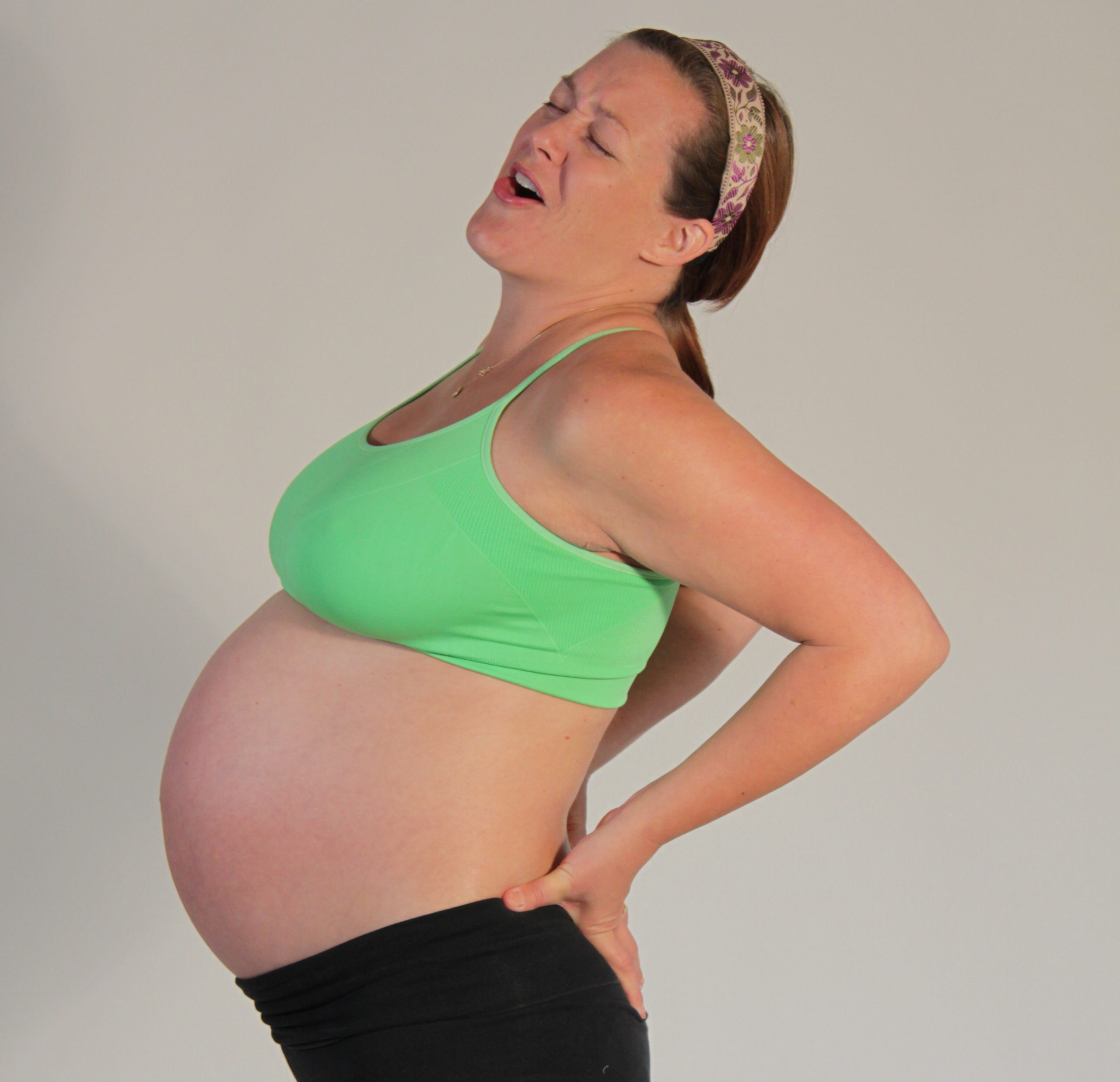 For some reason, the pelvis and all that the pelvis does has always been a special interest of mine. And, even before I had a kid, like years and years before, I was always super interested in the birthing pelvis.

My fascination with pregnancy likely stems back to the fact that you, in utero, are at ground zero. The environment you are given at that time is a complex combination of what your host is doing in terms of stressing, eating, positioning, breathing, and moving. All of these things create an environment that you, in development, are responding to.

There are a lot of other people way more qualified to talk about the chemical interactions of stress and poor nutrition, smoking and drugs, so I’ll leave that to them. What I like to talk about is the alignment factor.

When I was in graduate school, I wrote a paper titled Postural Implications of Gestational and Postpartum Low Back and Pelvic Pain. Warning: You may find this read a snoozefest unless you’re into pregnancy and stuff. Chances are, if you've read this far, you're good to go. Second Warning: My copyeditor husband has suggested that I make an "I was young and didn't seem to know much grammar" disclaimer. Everyones a critik.

Although [bodies] have been giving birth since the beginning of time, researchers have just started looking at the physiological and biomechanical changes occurring with pregnancy. A major reason for this investigation is the large occurrence of lower back and pelvic pain during and after pregnancy. Many researchers have attempted to find the mechanisms that determine hip, pelvic, and sacral pain in general populations, but few have examined this situation as it pertains specifically to the [gestating body].

The cultural perception of pregnancy-related pain and resulting issues is that these conditions are a normal part of the gestation process and perhaps not research-worthy. Data shows, however, that these ailments are not natural to the state of pregnancy, only normal. Studies suggest that 50% of all pregnancies will begin and end with debilitating back and pelvic pain, and even more alarming, that this pain continues postpartum. The role of exercise as both a treatment and preventive measure for these conditions is the newest addition to current research.

Pre- and post-natal exercise has traditionally consisted of modified traditional aerobic and strength training exercise. This type of exercise can be beneficial to general fitness goals but lacks the specificity in design when it comes to other requirements of the maternal female, i.e. improving structural integrity, optimizing vaginal birthing mechanics, etc. The mechanical functions of the uterus are now understood to depend on pelvic loads and pressures, yet this content has not yet made it into academic curriculum of pertinent professional studies. Creating a movement program for this population that not only meets general health guidelines but facilitates and improves the state of pregnancy and delivery outcomes is a valid scientific endeavor.

What have studies shown to date?

Pain is difficult to quantify for research purposes and can reduce the validity and reproductability* of a study. The use of the questionnaire is common protocol for data collection. For new mothers, the format is more time effective than scheduled appointments, and data is easy to collect due to simple, multiple choice answers. Common pain assessment questionnaires are the visual analog scale (VAS), Zung, and Somatic Perception (Russell, Groves, Taub, O'Dowd, and Reynolds, 1993).  Pain drawings, on transparency, are also used to quantify location (Nilsson-Wikmar, Pilo, Pahlback, and Harms-Ringdahl, 2003). The transparencies are then stacked to analyze data (2003).  The most significant chronic pain patterns found in the pregnant or post-natal were listed as the posterior pelvic-sacroilliac area (PPP), lumbar spine, or a combination of the two (2003).

Experience of pain itself is, of course, an issue of discomfort and not to be discounted. The much larger issue is, however, the daily limitation of everyday activity. Within the general population, adults experiencing low back pain find bending, twisting, and lifting difficult and painful (Youdas, Garrett, Egan, and Therneau, 2000).  For a new or impending mother the restriction of movement decrease the possibility of caring for and lifting a new baby, returning to movement for health purposes, or returning to work. This reality poses additional stress into an already psychologically demanding situation and could be a contributing factor to physical and psychological issues stemming from pregnancy. 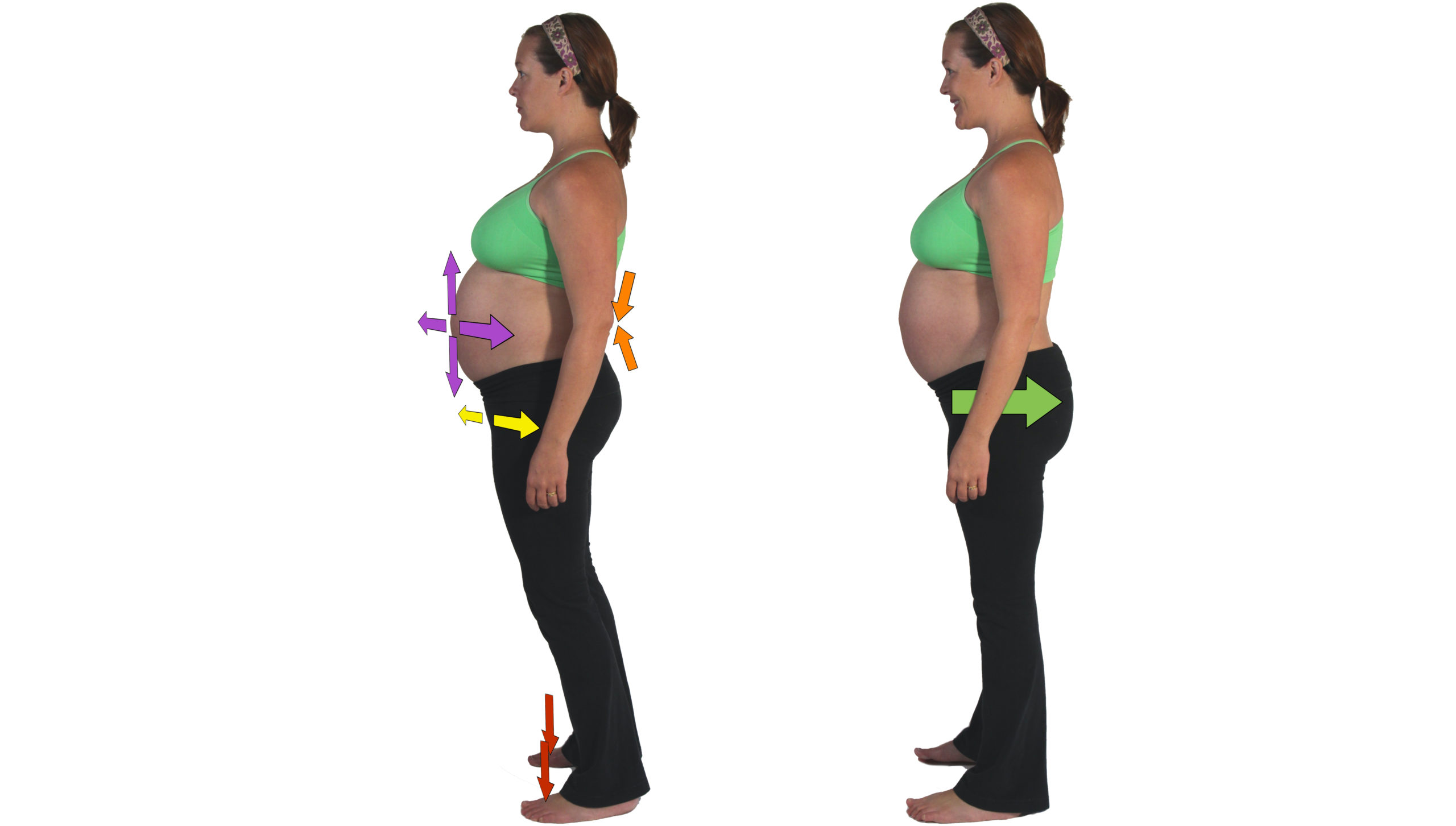 There are many circulating beliefs about where pregnancy-related pain comes from. Russell, Groves, Taun, O’Dows and Reynolds (1993) authored the first study to look at the effects of an epidural on lower back pain. Questionnaires were sent to 1615 women who delivered their first baby at St. Thomas’s Hospital in London. Following the questionnaire, the subjects with persisting pain were examined by a physiotherapist or orthopedic surgeon. It was established that LBP was equally evident in both epidural and non-epidural deliveries, and tended to be postural in nature (1993).

Pregnancy-induced posture and mechanical changes are common research topics when looking at possible causality of associated pain. What researchers have found is contrary to our beliefs about pregnancy related ailments. The adopted posture of pregnancy is individual in nature and not created by the state of pregnancy alone. While the increase of body mass and subtle forward displacement of a subject's center of gravity is empirically valid for all pregnant [bodies], there is no "pregnancy posture" that can be imposed on the state of pregnancy (Gilleard, Crosbie and Smith, 2002). It is generally believed that the pregnancy gait, or waddle, is a natural change due to the gestational condition. This is not the case. When healthy pregnant subjects were assessed against healthy nulligravidae, the kinematics were found to be very similar with only small changes in a maximum walking velocity (Wu et al., 2004). It is interesting to note that postpartum [bodies] with posterior pelvic pain showed large deviations in normal gait and large angular rotations of the hips and pelvis when compared to the healthy, pain-free pregnant population (2004). Wu et al. concluded that the pregnant female is intended to walk and move regularly, even with the extra mass of an impending baby.

These findings are very important contributions to solving pregnancy-related ailments. This data implies that it is not the physiological state of pregnancy that is responsible for pain, but the alignment and gait habits that a woman brings to her pregnancy that is the underlying cause.

Although conducting research on pregnant subjects will always be a difficult situation due to potential risk and liability, more studies are desperately needed. Studies on PPP could begin in the safer, postpartum realm. More recent studies have began to look at the benefits of strengthening exercise, specifically deep abdominal, pelvic floor, and gluteal musculature, as a possible, non-surgical method of dealing with varying pregnancy related ailments. 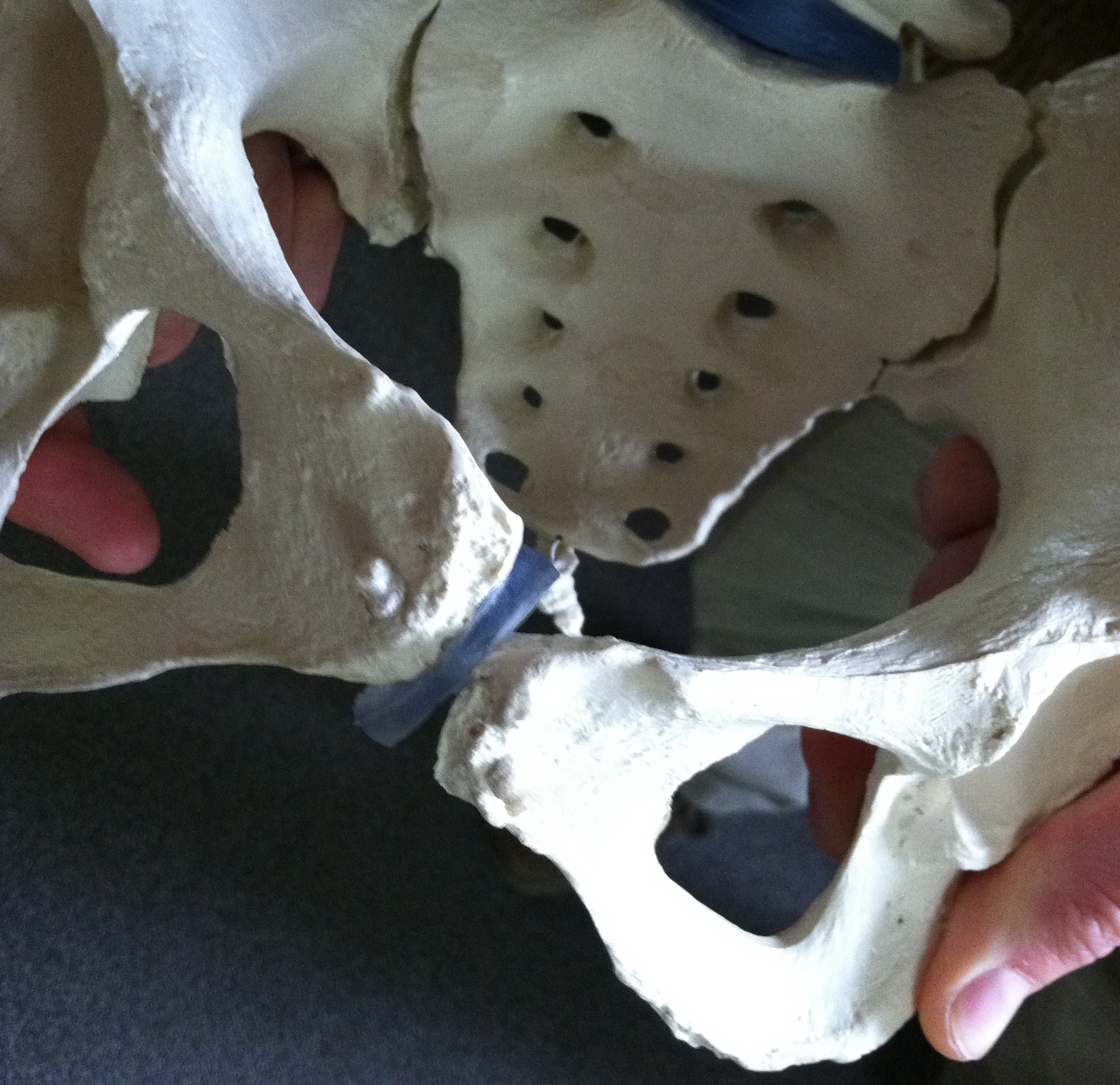 More studies are needed to quantify, define, and produce postural interventions to mitigate pregnancy-related issues. Treating pregnancy-related conditions with medication and surgery is not only expensive, but also ineffective in the long-term. It is obvious that studies need to be developed observing less invasive, less costly repair. One glaring hole in pregnancy research and correlating back pain are studies that deal with the postural and muscle stability loss following cesarean section. Cesareans are major abdominal surgery and are bound to result in systematic, measurable changes that in strength and subsequent injuries to the lumbar spine, hips, and pelvis. With a developing trend of elective cesarean, it is imperative that as much information on recovery and long term effects be researched.

Due to the traditional lack of women in research, medicine, and science in general, it follows that the amount of studies pertaining to women's issues be few in comparison.  As this slowly changes, studies examining traditional view points on the natural birthing process, especially the maternal mechanics of vaginal expulsion, will be better understood by birthing professionals as well as those prescribing exercise.

Pre and post-natal exercise is not new to kinesiology communities, yet it has always been presented as a modified aerobic and strength training workout, allowing a participant to continue with a fitness-type exercise program during the gestational period. The numbers of those suffering through pregnancy should be taken as a signal to improve the education of birthing and kinesiology professionals. Exercise that is designed to facilitate an easy gestation period, delivery, and recovery must be studied and dispensed through the correct channels.

Due to the lack of clinical and scientific training for most kinesiologists, exercise is over-simplified when presented to the pregnant population. Physical and physiotherapists typically do not see the general population until a problem has manifested and even then, are often prevented by professional guidelines to address mal-alignments elsewhere in the body, even if they are related to the presenting injury. Where are [pregnant people] to find this information before they realize they need it?

Most reviewed articles called for a movement in pre-natal physical education. Because poor postural habits lead to low back pain in the general population (Youdas et al, 2000), it is only to be expected that participants with prior posture and lumbo-pelvic problems find that pregnancy exacerbates their problem. Deviations in alignment are indications of a failing muscular support system. This system can be improved through a restoration of muscle and joint positioning. Intervention in alignment could potentially eliminate pregnancy-related pain if good instruction and intervention is early. Potential candidates, those with LBP before pregnancy, should be given postural exercises or guidelines to offset gestational pain.

After reviewing the literature on pregnancy and related low back and pelvic pain, a common thread becomes apparent. While the physiological changes are fairly similar for various [bodies] during pregnancy, biomechanical changes seem to be of a personal nature. Of these mechanical changes, one’s postural habits seem to have the greatest effect on pain. It would seem from an evolutionary standpoint, that debilitating low back, hip and pelvic pain would not be conducive to the natural birthing process.

Reproductability*: Even in grad school, I was busy mashing up related words.