If you're interested in reading more on ideas presented in the article below, I suggest reading Alignment Matters. If you'd like movement instruction via video, start with Nutritious Movement for a Healthy Pelvis.

Once upon a time, there was a tiny little post called Pelvic Floor Party on a blog called MamaSweat.  Did you hear of it? Well, a LOT of people did -- it was kind of freaky -- and it added an element to pelvic floor exercise routines across the globe. Because it has been a year, Kara Thom, the author of the original blog, and I got together (in cyberspace, because I have a new born and she has, like, 47 kids) and interviewed each other.

We split up the interview, half on my and half on her site. Here's one part below. Follow the link at the bottom to read the other part (including my favorite changing-table shoulder stretch.) I hope you enjoy Kara as much as I do. She's hilarious. You know, for a mom.

KATY: Ok, super-popular blogger-fit-mom. Just HOW MANY PEOPLE read Pelvic Floor Party, Kegels Not Invited? What was it like to have that many people read your blog? That's more people than have read anything, ever. Except for the Andrew Weiner Wikipedia. Tell me, did it make you make a lot of money?

KARA: I went from a little-known blog with around 15,000 visitors in my first year, to more than 70,000 my second year, and the Pelvic Floor Party posts were responsible for that. Finding fitness in the chaos of motherhood is all well and good, but apparently, much better when done without peeing your pants. And, one year later--happy anniversary Katy darling!--it remains my most popular post. And since I just checked the stats, here's a few interesting factoids: the last three people who read "Pelvic Floor Party" were from Paris, Egypt and Ireland respectively. We jokingly referred to it as the "post heard round the world," but it definitely is a message spanning the globe. It's not trending on Twitter yet, but it's hard to compete with the wave of political sex scandals.

Money? Have I made a lot of money? (She laughs heartily.) I have made exactly 0 dollars and 0 cents. In fact (she crawls onto her high horse) a large, prominent women's health website asked to buy the post for their site, but we couldn't come to agreeable contract terms (they wanted all rights and I wanted one-time rights) so I turned down the offer. I've also been approached by advertisers but that just doesn't feel right for Mama Sweat right now (you're welcome dear readers).

KATY: How did the squat/kegel information change you, personally? Did you really start squatting?

KARA: Oh goodness. Is that my pelvic floor conscience? I squat all the time and I shamelessly pee in the shower. I have not gone camping since that post, but I'm certain there would be no peeing on the shoes. That post also helped me put two and two together because I had been doing Cross Fit workouts (famous for deep squats) for about 8 months by then and had already noticed that my usual nagging hip pain/low back issues had disappeared. I knew I was stronger and it was helping but didn't understand until you ‘splained it to me: a strong booty is the back-up power for the pelvic floor and in my case with hip flexors like clam shells, I need good glutes to pry them back open. But what I love about the information is that squatting, while good to include in a workout, should also be part of the way you move in general. If whatever I'm doing requires me to be low to the ground I rarely bend over, now I squat.

One thing though, worth mentioning: once you get pelvic floor strength you still have to maintain it, as I learned when allergy season hit. I could safely get through one sneeze, but the double sneeze reminded me that my pelvic floor needed more attention. And, with my increase in triathlon training this summer, guess what I've done less of? Less strength training and yoga has also had ramifications for the aforementioned hip and low back. At my age, foregoing strength training and stretching is not an option.

KATY: What have you been doing since writing that blog? Lying around eating bon bons and stuff, or...?

KARA: What exactly is a bon bon? If it's dark chocolate with a touch of sea salt, then yes, I'll admit, that sort of bon bon crosses my lips occasionally. But the lying around part... hardly. Last summer Hot (Sweaty) Mamas: Five Secrets to Life as a Fit Mom went to press, and before it did you better believe I included this all-important info in the book. That post generated a few other exciting opportunities for me, including a video for Experience Life magazine, where I got to demonstrate the Bowman Squat for all to see. 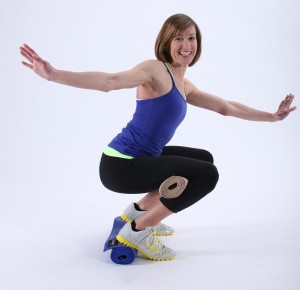 I also wrote a yet-to-be-published article for Health magazine, that included squatting for pelvic floor health, as you know because I interviewed you! (Katy's note on Kara's squat: First of all, I remember typing Kara an email on my iPhone at 4AM while on vacation in Hawaii to give her tips to make the squat "better" in terms of alignment. Note her bolstered knees and ankles. To work the glutes even more, the shins should be more vertical and less angled forward. Someday, I will get my hands on Kara Thom's psoas. Then she'll REALLY have something to post about :)

KATY: What is doing a book, I mean after writing it, like? I ask because I have one coming out in November and I thought all the work was done but then I see all the stuff you've been doing to follow up. What is it like having a book out? (Here's the cover. Cute, right?) 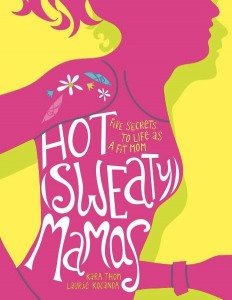 And, FYI, here's a picture of me finding your book in a California Barnes and Noble -- and, guess what -- my name is in it! Sweet. 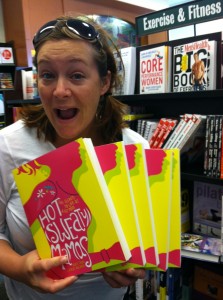 You are awesome. What's it like to be awesome? That's a lot of questions, isn't it...

KARA: Let's start with, "What's it like to be awesome?" Here's the visual: I'm wearing sweatpants and a race t-shirt. It's early in the morning so no one has come in yet to do my hair and make-up, and I'll need a little make-up because I just popped a zit on my chin (I thought being awesome would give me clear skin). Oh, what was that? No one is coming in to do my hair and make-up today? There are still toilets to clean and laundry to fold, noses to wipe and under-appreciated meals to make, but I can't help but feel awesome anyway. I get enormous satisfaction that I'm writing about topics that interest me and matter to others, but mostly I get to do it while watching my foursome grow. One of my daughters asked me the other day: "Mom, will your book still be alive when I grow up because I want to read it when I'm a mom." So yeah, the post-book-birth process is as hectic, if not more, than the time spent writing it, but I love that it's out there and I'm privileged to have books to promote and children I adore, and often at the same time, like today when two childcare options have fallen through.

KATY: What's next for you? More kids? More marathons? More squatting? I want to know how being a super-fit mom and a super-fun blogger plans for her future.

KARA: More books, marathons and squatting for sure, but I've maxed out on kids. I love pregnancy, birth, babies, but I have officially moved out of that stage and am focused on helping them become the people they're meant to be (I’m hoping at least one of the four likes running and triathlon as much as me, is that too much to ask?). This is just as fun and rewarding and I'm sleeping more at night (most nights) so that's a perk (except when I get sucked into [email protected]_sweat if you want to keep me up too).

To read the other part of the Kara/Katy coffeetalk, click here: http://mamasweat.blogspot.com/2011/06/hows-your-pelvic-floor.html

Also, post "your story" about how this new squat/pelvic floor information affected you (your PF, your hips, low back pain, birth, whatever...) if you would like it included it my next book NO MORE KEGELS! If it makes it in, you'll get a free copy. I'll autograph it to0, which will increase it's value by about $0.02. Maybe Kara will sign it too. I'll ask her 🙂