If you're interested in reading more on ideas presented in the article below, I suggest reading Movement Matters.  If you'd like movement instruction via video, start with Daily Movement Multivitamin.

When I first began to study anatomy, I did it from a text book, where "a bone" and "a muscle" and "a tendon" and "a ligament" were nice tidy pictures with clear explanations about where each was and which did what. Like a good student* I learned where everything was and what everything was called. Then, I took the next level of anatomy: cadavers.

In cadaver class, the body (a real one!) presented to me was radically different than the one in the book. Stuff was not easily separable and clear cut. Studying the book was indeed necessary, but the text did not reinforce the cadaver study as much as you'd think. Rather the cadaver study highlighted the inaccuracy of the text. Or said a different way, moving to the next level of study reveals the limitations of the step before.

Let's talk about fruit for a moment. Like the body, an orange has parts. These parts have been isolated and labeled by the people who study them.

The outside of the orange is the epicarp (also known as the rind). The epicarp is made up of an epidermis, hypodermal parenchymatous calls, and oil glands. Raise your hand if you’ve ever squirted orange oil mist into your face while peeling an orange! 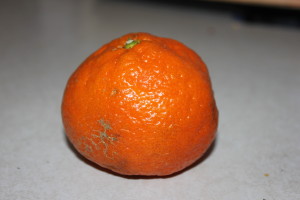 Connecting the rind to the meat of the orange (and the orange segments to each other) is the pith or albedo. (Alba=white.) 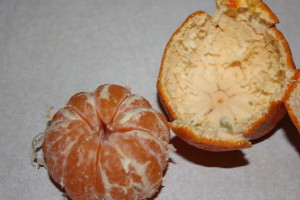 In case you were wondering if the internet was “worth it,” here is one gentleman’s story of almost being killed by orange pith, reaching us all the way from 1954. CHEW YOUR FOOD, FOLKS.

Beneath the pith is the endocarp -- the part of the orange we eat. Each individually wrapped section of the orange meat is called a carpel. 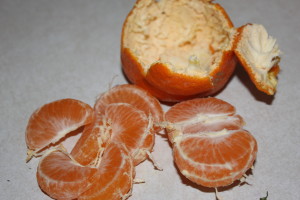 Carpels, in turn are each made up of smaller, individual juice filled sacs or juice follicles. 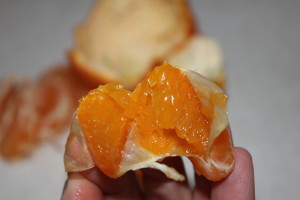 Each of these juice follicles is an individual plant cell -- a cell you don't need a microscope to see! 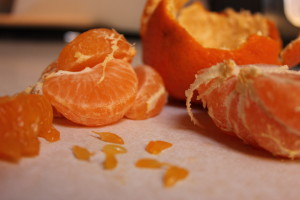 So, now that I've mauled this poor orange, let me explain my point. Or points. I probably have a few.

The first is, in order to study these individual parts, I had to literally disconnect them from each other. Which is okay. Initially, study begins with part recognition and listing general function. But, if you were to continue studying the orange, you would, at some point, have to learn about the way these parts work together. Those connections I just busted through to see what the thing looked like, I need to circle back around and study. The connective tissue is a part as well. What is it made of? How does it connect? What would happen if it wasn't there?

Once I'm done looking at all the visible parts, I need to studying the mechanics of the system. Just as I disconnected a connective tissue to look at the parts, there were forces I "disconnected" to look at the parts. For example, when trying to open the carpel to look at the juice follicles, you will see that making a small puncture in the segment skin revels the follicles are under pressure. Once an incision is made, the skin pulls away from itself revealing a constant tensile force. There is a relationship between this tensile force and the shape of the segment. The tension is not arbitrary. It is part of the orange. But it's not visible part of the orange and therefore often goes unmentioned in many an orange-lover's group, or worse, goes unmentioned in a group trying to understand how the orange works.

Studying the mechanics of a system is different than studying the forces or strengths of each part. To speak of the orange, I must consider the intact orange, which, of course, is an entirely different thing that the sum total of every orange part. The orange is an interconnected system. The forces that keep an orange together are important to the orange, if not to the person trying to study the orange. Any conclusions I have made about the follicles, about the carpels, or about the orange itself can be erroneous if I have failed to reference back to the orange-system, forces included.

P.S. There are actually real-live people who study the forces of an orange-system. Disruption of these forces cause fruit wounding, which in turn introduces a fungus or other stuff that can wreck a harvest, which means a loss of $$. Rest assured, someone, somewhere is working on these orange-system problems.

All humor aside, each of these perspectives is a valid one. Every discussion is a helpful one.We all begin with a vague awareness of an idea, that should change with study.

I'm about to start my 8th year blogging. These (above) are the ideas I'd like to expand upon this year, in addition to what happens to the orange-system when we do this: 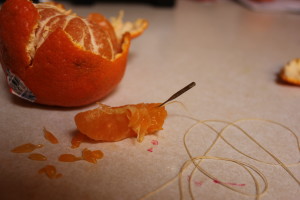 (Seriously. I just sewed this carpel up and it's TOO HARD TO SEE WHAT I DID because I used a pith-colored thread. And, my family will implode if I take another 15 minutes to stitch up an orange for a blog post.)

This year, I also want to write about how saying "the orange is fine" in this case 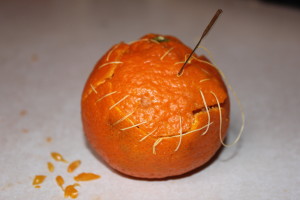 I hope you'll join me in 2014. My blog will be entirely about fruit, it appears.

*I was actually a crappy anatomy student the first time around and had to take my lab AGAIN until I memorized everything perfectly. Only to find out later that memorizing it didn't really help when it came time to cut as NOTHING WAS WHERE IT WAS SUPPOSED TO BE, jerks.