This article from 2010 has been edited, updated, and expanded in 2020. If you're looking for more on the pelvis, find our overarching movement philosophy and how it relates to pelvic issues, as well as more pelvis and pelvic-floor articles, exercises, and recommendations at Our Best "Healthy Pelvis" Resources. 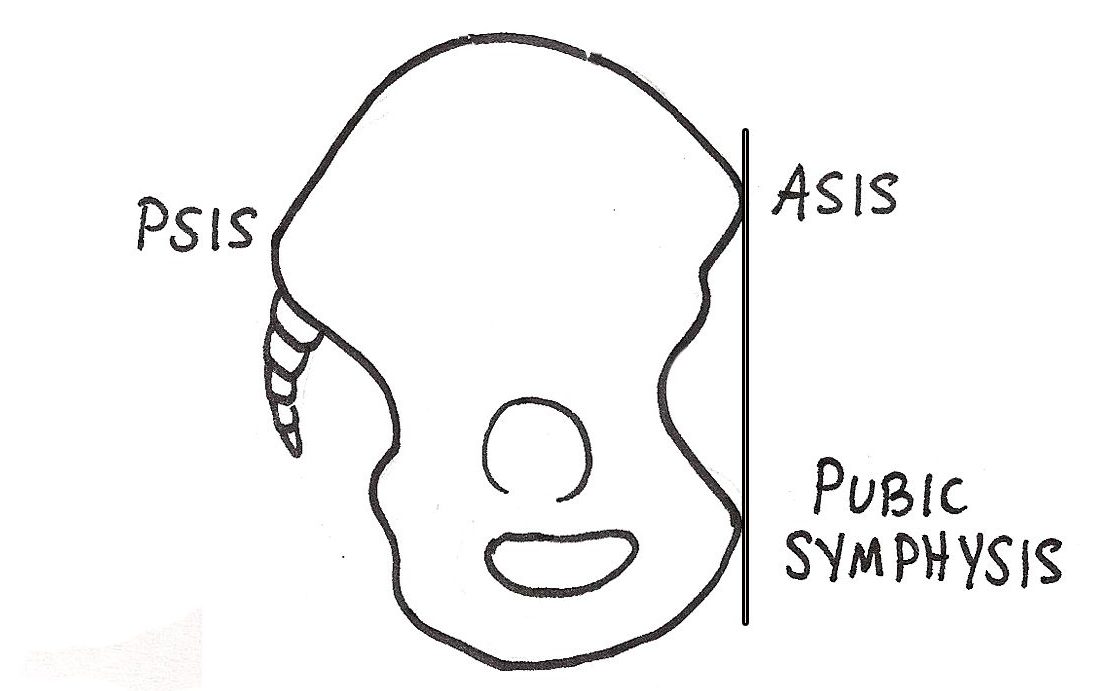 The term "neutral pelvis" refers to a position of the pelvis that maximizes the degrees of potential tilts and twists of the pelvis, so while neutral is measured as a fixed position, the importance of this position is really for once you're moving.

Anatomical neutral isn't arbitrary, but it's not always clear how to measure it. In the beginning...or, at some point 40 years ago, it was commonly accepted that the human pelvis was neutral when the Anterior Superior Iliac Spine (ASIS) and the Posterior Superior Iliac Spine (PSIS) lined up on a horizontal plane, which, you'll notice places the pubic symphysis a bit in front of the rest of the pelvis. 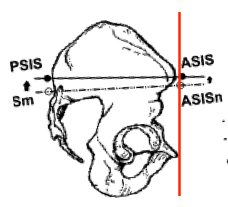 Later, a neutral pelvis was redefined in other texts as the ASIS lining up with the pubic symphysis in a vertical plane, like this (image from Move Your DNA, which, yes, you should read): 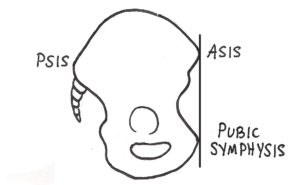 The difference between the two is subtle and likely not very important. I, like many, use the latter, although there are still many people using the former. And really, who knows which is correct? The body didn't come with a book saying which is what and how to use it.

The reason Nutritious Movement uses the ASIS and PS as markers of a neutral pelvis is because the PSIS is not an easily palpated prominence, which makes it impossible to see and harder to feel, even to well-trained hands and eyes. Thus it's not a reliable point for clinicians to use, let alone people at home, trying to check their own alignment.

Katy, if it isn't too much trouble, could you please quickly explain why you need a neutral pelvis to prevent organ prolapse. I want to understand! Thank you! ♥

In a nutshell: A neutral pelvis sets you up to be able to get the greatest range of loaded hip extension while walking, which in turn maximizes your gluteal muscles' ability to participate while you're moving and your glutes' ability to apply tension on the sacrum and offset/balance the tension coming from the pelvic floor.

Now before I explain more, it helps to see it in pictures and to try this out for yourself.

Lie face down and get your ASIS and PS on the ground (if you've got a belly in the way, work to keep the ASIS and PS level, even if they're not on the ground; and/or if you're prego, you'll need to try this standing). Now, WITHOUT moving the pelvis (which is tricky because the pelvis will tend to rock forward, pressing the ASIS more into the ground and lifting the PS away) lift your leg as high as you can—no straining.

Make sure you're not bending your knee (use a mirror), which is common when your hip-flexing muscles are tight. 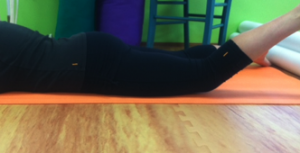 If you measure the angle between the femur (thigh bone) and the pelvis, a 30° lift during the exercise would indicate the potential for your posterior muscles (glutes and hamstrings) to work through this range of motion while walking. 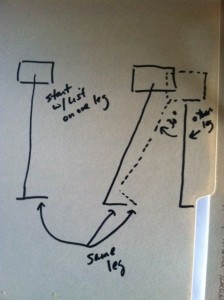 Note: In order to use your gluteals through this range, your pelvic-listing muscles have to be able to carry you the entire time (see "pelvic listing strength and endurance") on the standing leg, and your heel has to stay connected to the ground as long as possible, which—it's all coming together now—requires enough calf muscle length.

(And do I need to mention my crappy drawings are never to scale?)

Moving on, give yourself a slightly tucked pelvis by propping up the ASIS by lying on a rolled towel or yoga mat and keeping your PS on the ground. How does this affect your hip motion when you try to extend? 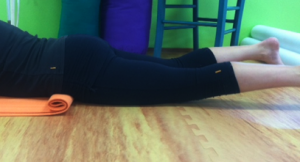 Try to lift your leg WITHOUT increasing pressure in the ASIS or moving the PS.

What'd ya come up with? (And, P.S. That last picture was me trying to extend my hip. With all of my might but to little avail.)

Most people can't budge their hips at all with their pelvis posteriorly tilted. Which means they can't do it while walking either. Which means no loaded hip extension while walking, which means very little work performed by the glutes.

A neutral pelvis gives our hips the much-needed range of motion while walking. Yes, a neutral pelvis is also great while standing and sitting (this position sets the stage for better abdominal leverage and gets you off of your sacrum while sitting), but it’s what the glutes do while walking that gives the pelvic floor, always contracting under the load of the abdominal and pelvic floor organs,  the constant resistance to generate the eccentric force that it needs to keep from shortening.

I really want to stress the walking-with-neutral-pelvis part of this post, because a few days ago someone sent me the 1 Billion Squat Challenge, or something like that, and said, Isn't This Awesome? How Strong is Everyone's Pelvic Floor Going To BE??? And what I can totally see happening twenty years from now is people doing as many squats a day as they were doing kegel exercises. Magazines will be touting the squat as the go-to exercise for pelvic floor disorder. Everyone will be handing out the squat ExRx like it's candy and we’ll end up where we are now—trying to use a handful of exercises in lieu of diverse, functional movement distributed throughout the day.

Here ye, here ye: Movement is food. Exercises are vitamins. Just as you can’t live on a diet of supplements, your body cannot get what it needs from isolated exercises. Squat less as an exercise and more in a manner similar to how you would if you didn't have so many conveniences. Squat when you go to the bathroom. Squat when you pick up stuff. The squat isn’t for the “exercise” of it, but for the movement. And movement, like food, offers way more than just minerals and vitamins.