Once upon a time it was well understood and common knowledge that pelvic floor disorders were the natural result of vaginal deliveries. It was just a normal part of the birthing process.

When it was "discovered" that women who hadn't had any babies also had the same incidence of PFD, the cultural awareness (and therefore the information and research dollars) could begin to investigate the problem beyond the prior conclusions that PFD was an inevitable part of birthing.

Now it is well understood and common knowledge that pelvic floor disorders are the natural and inevitable of being female.

Well, let me update everyone here, please: Pelvic Floor Disorder are in no way limited to women. They are just as prevalent in men, and worsening (in both populations). Sure, the names of the issues are different -- many of them using the word "prostate" instead of "vulva" but the biomechanics/mechanisms of these ailments are the same. In women, organs fall out. In men, they fall down. And rest on the prostate. Something, I'd imagine, about as comfortable and feasible long-term as sleeping between your mattress and box spring.

While public attention might not focus on the male experience of this issue, you can rest assured that they are getting the same incomplete assessments and therapies (let's strengthen up that pelvic floor with some Kegels!!) as the ladies.

If you work at all with the pelvic floor (male or female), if you personally have a pelvic floor disorder right now, if you have some sort of chronic pain issue that is "unsolvable" right now, if you are a noticing a relationship between your mental-state (stress) and a body ailment (pain), if you are NOT noticing a relationship between your mental-state and a body ailment, if you are a man, if you are a woman, if you work in the pelvis (or on or around), if you offer any sort of body therapy: You need to read this book. 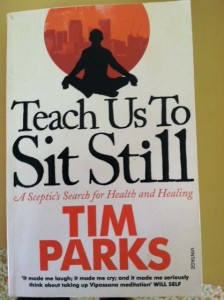 Here's the link to Amazon (No, I'm not getting any kickbacks.) See if they have it at the library. Borrow it from a friend. Whatever you need to do, read it. This is one man's experience with an "unsolvable" pelvic pain issue that had him at wits end; his battle to not be given surgery that "probably wouldn't fix anything but couldn't hurt anything;" his slow realization at chronic tension that was so ingrained in his every muscle and every movement; his failing to remember and then remembering to remember: Oh Yeah, I did bleed out of my penis a couple times when I was in my 20s, but was told that it "wasn't related" to anything. Overcoming his resistance to order a "self help book on pelvic pain" and "see a massage therapist" (a guy that talked nonsense about chakras and hoohas and voodoos and trapped emotions yet, strangely enough, was the only person in years who could relieve him of mind-shattering pain.) And, how he got better.

That's all I'm going to say about it. Just read it.