I had a great Twitter exchange with a woman starting on her alignment journey, and because both she and I could imagine others having a similar experience, she's allowed me to share it. You can tweet her a thank you if you'd like.

@alignedandwell I've been toe stretching & backing my hips up 1week. Now joints are spontaneously cracking. No pain though. Is that normal?

I asked her to clarify, because I'm not always sure what people are doing.

@AlignedandWell Constant cracking of bones (ankle,wrist,shoulder,hip) is new since doing this. Scared I have osteoarthritis ...or dying

Many times people do a portion of "alignment," which would be some stretches or some exercises, but not everything. Tough to explain on Twitter, I wrote that she might be stripping her coping mechanisms (i.e. muscle tension) without adding some specific strength back in--so I suggested the list.

@AlignedandWell Done! Thanks! Have u heard of this before? Working on alignment and suddenly things start snap, crackle, popping regularly?

When you're working on your alignment, it feels small. A couple inches of backing up your hips. Some calf stretches. Some lowering of the ribs. But while it's subtle, it actually means that EVERYTHING you are doing is different now. So is it normal for your body to adjust to doing EVERYTHING in a new way? Absolutely.

@TypeACubed alignment work Is subtle, but it's changing how u use your whole body. Even things u do all the time are now new loads.

Then we were done chatting. Or is it twittering?

@AlignedandWell Alrighty... trusting you on this one. Yesterday 1st time my massage therapist said I had no knots! Cracking yes, knots no!

Then, a week later I got this:

@AlignedandWell ok. We need a blog post that when you start alignment work, there may be some NORMAL reactions. Like cracking. #NotDying

At first I thought she was still worried and I gave her the name of the noisy issue--sudden onset crepitus--and suggested she follow up with her doctor for the sake of comfort.

Also, I noted that her physical experience was created by everything she was doing and that I had no way of knowing what else she was doing in conjunction with her alignment exercises.

For example, say you only do one or two things you've read on here, but continue with the high-loading behaviors that created the tension in the first place--tension that has become a necessity. T tweeted that it was quite possible that the muscle tension she was stripping away was part of her body's stabilization mechanism. Alignment is a whole-body, whole-environment, all-movements considered thing, you see.

@TypeACubed shifting around. "Alignment" is a big-picture thing. (Sorry, couldn't fit this into one tweet!)

Anyhow, it turned out she was great and just wanted me to let you all know that there are side effects to alignment that might seem scary at first. Turns out that, like many of us, she's a dynamic mover and demands a lot from her body.

@AlignedandWell Never take rest days unless sick. (yes, I know I "should"). Suspect you are right with tight muscles stabilizing me

@AlignedandWell I sometimes wonder if I've been unaligned for so long I've gotten used to being "hurt". Sore feet, neck, back. Twinges

@AlignedandWell Now that the cracks stopped I'm amazed at how things are NOT hurting. It's a new feeling! Broken was status quo before.

A great story, thanks for sharing!

As you can imagine, I don't find anything about alignment work scary, but I do find flying--certain types of flying--scary, depending on the circumstances. For example, I'm chill with commercial flights because EVERYONE TAKES THEM ALL THE TIME so I just figure IF EVERYONE IS DOING IT, IT MUST BE SAFE. Horrible logic, I know, but since I can't know and control everything (which is not to say I haven't tried), I have to hang my hat on certain things.

But last week I had to take a small airline where I sat right behind the (one) pilot in a (two-pilot-seated) plane, which automatically made me thing "something's missing here." And then there was the time he whipped out this book full of charts half way through our thirty-minute flight.

HEY MAN, WHY ARE YOU DOING THAT? Shouldn't you KNOW everything before you got up in the air? Should you be reading right now? Why is that alarm going off? Are we out of gas? How old are you anyway? Do you even shave? And why did you just flick, like, 10 switches in 3 seconds. You seem panicked. WHY ARE YOU PANICKING?

Now, to be clear, I've been flying in small planes since I was a baby. Everyone in my family is either a private or commercial pilot. I actually KNOW why the pilot opened the chart book as he changed airspace and why he needed to check all the information for the airport we were landing at. But still, there's just something when I'm right in the middle of it that allows my fear to bubble up.

Frankly, the fear in me is there a lot of the time, I just need little reasons to let it out. Flying with a single, underaged * pilot in an aircraft clearly designed for two grown-up pilots, in a small plane which everyone knows is inferior to a bigger one, while leaving my kids behind for the first time, was the best reason eveh. 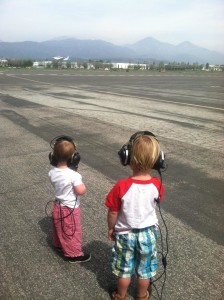 Anyways, I totally get how easy it is to be worried about situations that arise when working on your alignment when you're not an alignment pilot, and you're sitting in the backseat (to your body) watching it crack and pop and feel weird and look weird, etc. The good news is, you're not in the air (like I was) and you can pause whenever you want. If ever you feel worried, you can just STOP. Get grounded, change your pacing (maybe it was too much, too fast), and get clarity (maybe you need more information, a more complete map of where you're going). Because ultimately you are the one flying your plane. 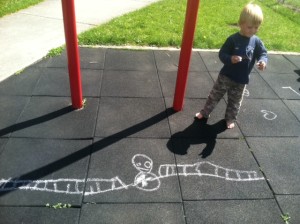 Or at least you're the one sitting there reading a little book filled with charts while alarms and things are going off. 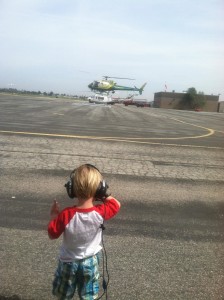 *Just kidding. I'm almost 100% he had his license. You can get your commercial pilot's license when you're 14, right? 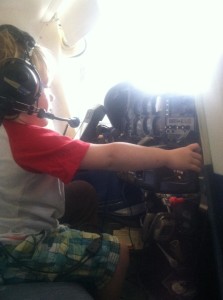