This article from 2012 was lightly edited in 2020. For more healthy pelvis resources and exercises, read through Our Best "Healthy Pelvis" Resources.

The forward bend, or yoga's uttanasana is probably the most basic hamstring-using exercise you can find in an exercise class. I love it because it feels good, don’t you? But here’s the thing: as a hamstring mover, it might be the most mis-performed “basic” movement out there as well.

Tight hamstrings can do many things to your body position, including trapping your knees in a slightly bent position or keeping your pelvis in a chronically tucked position. When it comes to helping folks see how their movements might be contributing to their pelvic issues, I'm always on the lookout for hamstrings that don't move—especially when you're trying to move them.

What shape does the body take when you pair a forward bend with tight hamstrings? You'll see knees that bend (a little or a lot) and/or a rounded (flexed) lower spine—both masking the immobility in the hips. If you've got a really flexible back, you can even get your hands to the floor without having to move your hamstrings at all.

Don't let the knees bend (formerly: your knees should not bend). Knee bending reduces the hamstring-lengthening effect on the way down, and it also reduces the ability for the hamstrings to work— as they lower you down (eccentrically) and pull you back up (concentrically). Which means the tiny muscles of the spine, instead of the much larger muscles of the hamstrings and glutes, carry the torso down and up. If you take a look at your favorite anatomy book, and think about muscle mass and leverage, you’ll see that the hamstrings are getting out of forward-bend work. The spinal extensors shouldn't have to be handling the load alone with their smaller mass and shorter levers.

Here's a "before" pic of the end-position of a forward bend. Note the flexed knees and spine. Also note, says model, the amazing garden behind him. Where "he's sacrificed joint mobility for the movement of the soil." 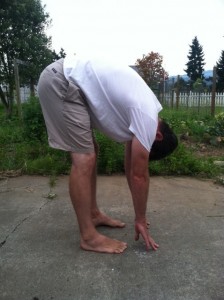 Here's the "after" pic of a modified forward bend. Yes, this is the new END POSITION—it's the amount of motion allowed by his hamstrings and it's at this point they would start a stretch. 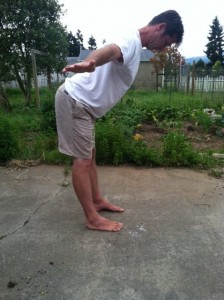 Modified forward bends look a whole lot smaller, I know, but the posterior muscles of the legs are actively participating so much more in this version. It's also a much more accurate assessment of how much your hamstring tension is affecting the motions of your pelvis, knees, and spine.

Find and respect your current muscular boundaries, and they will reward you by expanding.