At the end of the day I am exhausted, both mentally and physically. Mostly mentally. I don’t want to work. I’m unable to clean. To think. The only thing I am capable of is drinking something warm and watching West Wing reruns.

My husband and I, both former competitive athletes, really miss the days of focused exercise time. While it’s no longer our desire to train as we used to, we both miss the quiet “alone” time of a focused session. So, we decided that instead of Rob Lowe, we’d watch Rodney Yee every night this month, and do a little yoga instead.

But here’s the thing. I have kids. And what I’ve learned is, children will destroy your stuff. Not just things -- like your carpet and mind -- but your plans. Which is why I never put all my (movement) eggs in one basket.

This morning (note: NOT the prearranged time to do so) we put on our yoga DVD for the kids. I mean, we were planning on following along, but we weren’t putting it on so we could do it. We just put it on instead of what we usually do in the morning, which is sit on the floor and watch the kids destroy our stuff while trying to convince them not to. 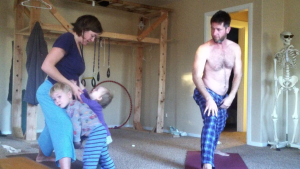 If you’re figuring out how to get more movement this year, may I suggest thinking outside a specific exercise time. Roll out your mats, bring out your equipment and turn on a DVD (or whatever) a couple times a day for the family, just because. Think of it as another way to model "we can move whenever we want!" No plan needed.

Children seem to have a preternatural ability to detect when it is your intention to do something without them or when you desire a specific outcome. If you’ve planned on getting an hour of movement via “taking a super-fun walk with the kids” from 11am-12pm, things like getting out the door late, someone needing a diaper change, or some other time-sucking crisis is bound to happen. This can leave you feeling frustrated at the lack of the amount of time you ended up moving. "Life" can also undermine your progress when you allot a short period once a day for movement.

This doesn’t mean that the 9 unplanned minutes of movement you get here or there has to lessen “Your Time” but that, by thinking bigger, you can actually find more -- more movement and more of the other things that aren’t scheduled. Like precious moments with your kids.

P.S. If you don't have kids, I had found -- before I had kids -- that this whole "I'm just going to do this exercise DVD or whatever for 7 minutes" method to work very well. Doing the thing isn't usually difficult, it's getting the thing started that takes a ton of effort.

P.P.S. SO THAT'S WHERE MY SUNGLASSES ARE!