If you're interested in reading more on ideas presented in the article below, I suggest reading Move Your DNA: Restore Your Health Through Natural Movement - Expanded Edition. If you'd like movement instruction via video, start with Daily Movement Multivitamin.

It’s Move Your DNA (my latest book, if you haven't been following along!) crunch time around here, so I’m doing a little double dipping between my Facebook and blog page; bear with me.

Yesterday I posted two items that are seemingly unrelated at first glance, yet deeply entwined at a second.

The first item I posted was a New York Times blog piece called Hope for an S-Shaped Back.  With the article I posted:

It's important to know that the arch in your foot and the curve of your spine are not fixed structures but SHAPES created by muscular activity. This means that what you do with your body is a factor when it comes to issues like an S curve (type of scoliosis) in your spine. (And, totally related, have you ever seen the flopped-over fin on an orca in captivity? More on this later.) 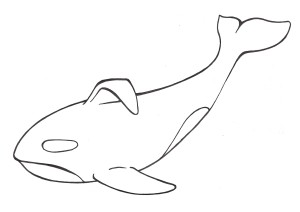 The second item I posted was an article from CNN.com, "SeaWorld responds to questions about captive orcas, 'Blackfish' film," a piece allowing SeaWorld to respond to points raised in the documentary Blackfish (which you should watch if you haven’t already). With this article I posted:

It's so much easier to see diseases of captivity in other species. In my next book there's an entire section that explains the floppy orca fin, how it occurs in captivity, how to recognize your own "floppy fin," and why exercise does not replace movement.

From SeaWorld: "While a killer whale can and occasionally might travel as much as 100 miles in a day, it should be said that swimming that distance is not integral to a whale's health and well-being. It is likely foraging behavior. Given the challenge of finding and killing as much as 300 pounds of prey every day, killer whales in the wild -- like any species -- conserve energy and move only as much as necessary. Killer whales living in our parks are given all the food they require. They also exercise, receive veterinary care, live in the company of other members of their species, and receive mental stimulation. They adapt very well to life in a zoological setting." Anyone else see the similarities between what SeaWorld is telling us and what we are telling ourselves?

You'll have to wait for my book to read more about what it is about the mechanical environment that keeps a whale's fin up (or not), but the gist of it goes something like this: the forces created by the way (quantities and qualities) you move through the environment most natural to your body (read: your DNA) create structural responses that your body depends on.

Not every orca fin flops--there are likely certain genetics (like fin height) that make a fin more vulnerable to floppage, but in the natural (read: natural forces) environment these particular genes aren't an issue. It is only when the mechanical environment -- an epigenetic factor-- is a particular way that the fin misses out on the load-nutrients necessary to keep it upright.

So, to scoliosis. And to diseases of captivity. We humans have been dwelling in a movement drought comparatively speaking. Someone had emailed me with respect to her child's foot-arches, which she feared were falling. What kind of correctives should she start doing? My response:

"You can't compare a baby/toddler's alignment to an adult, their anatomical "neutral" is in development, not at an end stage. Babies don't pop out with arches, they come out in the position they've been in while in the womb. A child will develop based on the environment they are presented with, not via corrective exercises and special shoes. My advice is to pay attention to the mechanical environment all the time and not worry about some pathology that isn't there yet.

Roan, my daughter, had one shank and foot way more abducted than the other, but it was self-corrected through lots of movement -- especially walking -- and who knows if the tremendous amount of hanging she does didn't release a psoas that was shortened more than another due to her positioning while still inside me. I've got a tight side, so her environment wasn't extra-force free. We come with kinks in our hoses, for sure -- we're not perfect, waiting to be screwed up -- but we have to move a lot and monitor our static positioning to create the mechanical forces necessary to smooth us out."

In many disease cases, this is the missing piece for us human-animals. The kinks do not un-kink without persistent amounts of loading all day long, the kind of loading that happens when we are out swimming 100 miles a day foraging for food. Oh wait, mixed up my species there for a second.

I get a lot of emails regarding scoliosis (and a lot of other issues as well), specifically “how should I adjust my alignment exercises as I, obviously, have different alignment” in style.

Our relationship with medicine/therapy reinforces the idea that everyone needs to “take” something different, and that we have a problem that needs to be addressed by a specific antidote, that the whale with the floppy fin needs to wear a custom fin orthotic and do 3 sets of "lift that fin" crunches. If we pan out our perspective, we will see that a species has baselines of movement (or food or sleep or …) that developed over the millennia that the species has developed. If we restore these baselines, in this case if we start meeting our movement requirements, our body will restore its own equilibrium or homeostasis. The root problem will have been eliminated; the symptoms will fade over time.

And, what looks like the "same" recommendation for everyone isn't, really. Say your habitual daily water consumption is one cup of water per day. Eventually your low level of water consumption leads to constipation and so you buy my book titled Healing Yourself with Water (this is a fake book title, I don’t know anything expert-y about drinking water) and skim the entire thing looking for where I talk about constipation, specifically, and how much water you need to drink to fix your problem.

But, let’s say that I spend the first half of the book explaining how water works and how the human body requires 8 cups a day to function properly. By doing this I’ve effectively given everyone exactly what they need to get better. To make it apply to you, all you have to do is subtract the number of cups of water you were drinking before (1, in this case) from 8, and BAM, you have your personal recommendation (drink 7 more cups of water a day). If I had to write “if you drink 2 cups a day, then add 6 more” and “if you drink 4 cups a day, then add 4 more” it would become tedious to both read and write. A general guideline on “essentials” is not always a blanket prescription if it requires that everyone adjust their habits uniquely in order to establish baseline behavior.

Also, the experience we have regarding our health couldn’t possibly be the result of any one thing. Rather, we are a physical ball of habits, environments, and scenarios. The water you drink is but one input. Which means that constipation isn’t caused by drinking only one cup of water. There are those who are constipated when they drink 6 or 8 cups of water. Or, maybe you drink one cup of water and, as a breastfeeding mom and you notice your milk supply decrease and that’s why you bought the book. Or maybe your food doesn’t digest well because you drink too much water, like 15 cups a day, for example. There’s no possible way to write a book that meets every individual right where they are without giving a framework based on the biological essentials. Maybe your water is disease-ridden, and the it’s not the quantity you need to adjust, it’s the quality. Again, my fake book covers the essentials of water drinking, and you can compare all the info to your own situation.

So, in this same way thumbing through my books and blogs and Youtube videos to look for the section that applies to you, let me save you some time right off the bat (this bat ironically placed at the end of a long-ass blog post) by saying that I can’t save you any time. Everything I've ever written pertains to you and any issues that might be going on. You want to know which habits need modification, which exercises you need to do, and what you need to learn with respect to your specific ailment? YOU NEED ALL OF THEM. They are all part of your baseline. The end.