This one time I fell in love with these earrings from the National Geographic catalog: 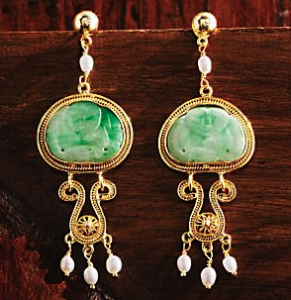 These elegant earrings feature 90-year-old jade buttons from the time of the rule of Puyi, China's ''last emperor.'' Bezel-set in 24-karat gold vermeil, they feature dangling tiers of cultured freshwater pearls. Wear an evocative piece of history that symbolizes the end of an era from nearly one century ago. As these are handmade by artisans using vintage buttons, each will vary.

The write-up was so great, you can imagine my dismay when they arrived and turned out to be a huge pile of crap. I guess the “each will vary” should have been my clue. Maybe some of them were elegant, but mine were basically green plastic glued (really) to aluminum wires that broke in about 10 minutes.

Why am I telling you my sad earring story? Because I thought that National Geographic was above selling crap as authentic stuff. Which was my bad. And you probably saw right through that earring ad, am I right? I'm a sucker for green and gold.

In honor of my earrings, here is a small list of “science stuff” people have forwarded or asked me about, that with a quick glance look a lot like vintage gold and jade earrings from the last emperor of China but appear differently when holding them up close to the light.

Do you have to have your period? Nope. Through modern medical intervention, you can now choose to suppress this monthly bag of good times. Why am I mentioning it? Because the support argument for suppression is that the act of bleeding monthly is a cultural one as opposed to a biological one. How was menstruation determined to be cultural? Because modern Dogon women (a hunter-gathering tribe in West Africa) only menstruate 1-3 times a year when they’re in their 20s and 30s. Which sounds like a whole lotta sweeeet, I agree.

So let us consider: Is there a difference between not menstruating due to the effects of your lifestyle (diet, movement, quantity of sleep, evening stimulation, breast feeding style, stress level) and not menstruating because you’re taking a pill regularly to stop the affect of your lifestyle choices? Of course. These two situations are not even close to being biologically similar.

I don’t have an opinion on which one you do. Which is a lie, of course, but my opinion is moot. Do whatever you’d like -- but don’t do it because someone has said, Hey, those ladies don’t menstruate over there and they’re fine, so it’s totally cool for you to take these pills and not menstruate either because it’s obviously not a human requirement. This would be a very poor use of “logic.”

If you’re menstruating monthly then what we do know from the literature is that your monthly outcome has a lot to do with the way you are using your body -- not some automatic "go monthly or go home" genetic program.  Suppressing the outcome (i.e. heavy or painful bleeding) is like turning off the fire alarm in the house before you’ve identified and stopped the fire. And if this fire manifests as something else, it shows up further from the source and could seem like a mysterious “disease” that you somehow acquired due to bad genes from your mother.

The notion that continued bleeding is a “cultural choice” should clearly imply that the habits of our culture have a biological consequence and not that we, as a culture, have decided that monthly menstruation is something we should experience and have thus created. Unless we voted on that and I somehow missed it. Because I’d like to vote on that one. Really.

The “Walking” Reflex
Humans are born with a lot of various reflexes. One of my favorites is the U or walking reflex. What is it? When newborns come out, they automatically “step” their feet when their feet come into contact with something. Like they're on some sort of invisible treadmill, which you have to admit is entirely cool.

In the 60s and 70s, researchers studied this reflex and found that while it was present the first few months, it went away until the baby was more cognitively ready to walk and able to use a different, less primal part of their brain. The final deduction: Primal reflexes are left over from our primal time as primals. Nothing to consider here -- these are just spare parts, folks.

This scientific conclusion was hugely important to the field of biology, neurodevelopment and neuroscience because it became a tenet of these fields -- that more corticospinal development was needed in order to learn and control movement. Kind of like, "chill out little baby trying to walk out of the womb, don't you go rushing your development. You'll need to be sitting there for quite a while until your brain is 'ready' to get out and load those body parts."

Only, here’s the thing: It turns out that the reason the walking reflex disappeared in the babies was because the researched population all came from a culture (ours) that doesn’t have a protocol for requiring the baby to hold its own body in space.

Very quickly babies gain more mass than their little-used (and thus poorly developed) muscles can handle. Which means they no longer had strength to lift their own legs in a controlled manner. How’d the next generation of researchers find this out? They put babies in water. Once their weight was held by the buoyant force, researchers saw that the "early" stepping reflex was going strong -- step step step -- the entire time.

The walking reflex is just a from-the-factory program to help us start moving unsupported as quickly as possible. Why as quickly as possible? I’m glad you asked. (You asked, right?) Again, these new researchers come to the cultural conclusion (groan) that nomadic people need to walk ASAP, cuz guess who has to carry that non-walking baby?

Perhaps more biologically relevant is that it also turns out that the body doesn't need to "wait" for brain development to learn to move. In fact, it's the early movement that generates large improvements in brain and spine development. The first set of researchers not only got it wrong, they got it backwards. Which easily happens when you don't see beyond the parameters of your own culture. Even as scientists, they couldn’t see how deductions regarding "normal, or natural human development” were automatically flawed by not collecting data from populations with different habits than our own. And, P.S. This happens A. Lot.

Fascinating, right? And, you’d think that with the newer data (*new* as in, from the 1980s) people would have gone back and rewritten their parenting books, and pediatrician’s offices would have new pamphlets and biology courses would have changed their curriculum to start teaching what really happens to the walking reflex and come up with a list of suggested behaviors (i.e. cultivate the walking reflex as is done all over the world in modern hunter-gathering populations where the average unsupported walking age is 9 months) but no. You’ll still find reference to this “primal” reflex -- the fact that it disappears (where’d it go?) -- and that walking will reappear when the baby is cognitively ready.

Ok, I have a few more, but did I mention that I'm hugely pregnant and tired? I think I'll save the others for later because this post is already over 1000 words and I want to take another walk before You Know Who wakes up.

P.S. If you want to know more about what it is that the Dogon or modern hunter-gathering populations "do," I suggest  Hunter Gathering Childhoods (a collection of HG literature on topics ranging from breastfeeding to sleeping to baby-gymnastics to household arrangements). It's a little on the dry (all research) side, but it was and still is my favorite parenting/baby book 😉