I decided to make holiday cards this year, which is funny as I am the least crafty and creative person of all time. And while I adore hand-made things, I’ve never actually completed a project because I’d always rather be reading a journal article or studying a textbook or writing a blog post. I have a problem with any activity outside of biomechanics and it can be an issue.

But, I had decided that I would send out cards! I was going to try something new! And none of this store-bought stuff with pre-printed words, put them in the envelope thing. I was going to use glue. And glitter.

I also decided to keep it “real.” Instead of including a matching-sweater, professional photo, I went with one snapped first thing after a sleepless night. A photo that showed it as it is. Crusty. Whiny. And unshaven.
Our photo shoot looked like this: 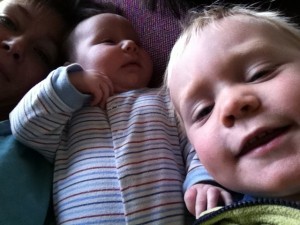 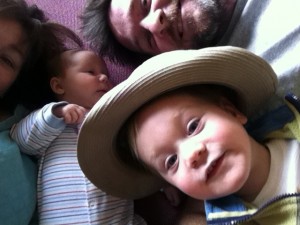 I went to Office Depot and scored shimmery construction paper, a gold and silver metallic pen, card stock and glue sticks. And, with a tendency for grandiose projects, I also bought some star stickers. Old school style.

The next day I was shopping with my sister and she showed me this “holiday snow in a box.” 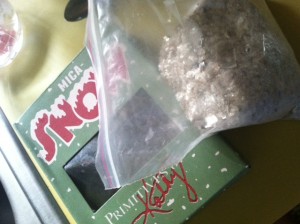 Awesome! Something else to add to my card! Something magical! “I’m going to put this in my cards!” I exclaimed. After she mentioned the mess that secretive card-confetti can leave behind, I made a note to put twice as much in her card.

I MEAN REALLY, YOU’RE GOING TO BE UPSET WITH EXTRA FESTIVENESS???

It’s my self-appointed job to teach my sister lessons. And she loves it.

I then went home and, with the holiday music a-playin’, began to work on my cards.

I’d like to report that I still have no patience for crafty stuff. After the fifth card, I was physically unable to trim one sheet at a time and insisted on doing five at a time. And then eight. Only, the lines started getting wobbly as I cut a group of pages.

I used a glue stick to glue on the pic and one of my favorite quotes, only I didn’t have time to glue the whole thing. So I just splotted some glue here and there. I added the star-stickers, but they usually lost an arm to my haste. And, I didn’t bother not using the ripped ones, I just used a second to mask it. Clever. I added snow. A lot of it. At least to my sister’s card. Then, I mailed them.

I am happy to report, for the first time ever, I finished a crafty project. Even if they were sloppy.

Since sending them out last week, I've gotten a few responses, mostly on the snow. Texts like: WTF is up with all that snow? What are you, the mess-fairy? Did you hear me curse your snow? It messed up my ________."  And comments like: I just got your card and I love the pic and iridescent particles! Wow, thanks for making it snow here just a little, it brightened up my day!

Which made me think about Vipassana meditation. During the 10-day (which is really 11 days) course, it is presented that how you experience life has less to do with events and more to do with how you see them. Some saw my snow as something beautiful to bring joy and some saw it as an irritating chore. The exact same snow.

Something to think about, for sure, especially if "reduce physiological stress" is on your list of health goals for next year.

Anyhow, I feel successful in creating a card that generates an experience that matches my life right now. Very little pretense (does pretense mean showered?), barely held together, with a house in serious need of a vacuum.

P.S. I just discovered I have a 4,000 word article due in a week. Which is why I needed to write this post first. Now, off to clean the fridge.