This is a really cool article on dental plaque preserved on ancient dead people.

But in addition to the aforementioned cool article, here's what you really wanted to know: Calculus is not only a branch of math but another word for dental plaque. Why? Ah, I'm glad you asked. (Prepare for seemingly long non sequitur that's actually totally sequitur. Sequitur sequitur sequitur.)

The first rudimentary "taxi" meter was created by engineer Vitruvius. Actually his full name was (probably) Marcus Vitruvius Pollio, but for some reason everyone in the olden days went by one name. Like Adam.

So anyway, as carts-for-hire moved forward, Vitruvius rigged it so that previously-counted stones would be dropped at a fixed distance via a turning wheel. The number of stones missing from the original lot were counted and the fare derived. Calculus is the mathematical study of change, where change is very difficult to measure.

For example, say you're standing on a cliff and you want to haul up a long and heavy rope and at the same time you want to figure out how much work you did to pick it up. Because this could totally happen.

So anyways, you're on the cliff and you're like, I know! I'll just figure out how much the rope weighs and then figure out how high I lifted it and BAM, have my answer. But if you calculated it this way, your answer would be wrong. Or better said, it it would be imprecise and here's why: As you're pulling the rope up toward you, some of it is being put on the ground behind you. Which means the work your doing minute to minute is decreasing because the rope is becoming lighter as you're pulling up less of it.

Calculus, then, is the process of setting up the equation so that you can check in with the rope at different times. Maybe you do the math by checking in every minute you are pulling the super-long rope up the super-high cliff. So you've got how much the rope weighs when it's THIS LONG over one minute. And then THIS LONG over one minute. And then THIS LONG over one minute. Only, even then your math would be off because since the rope is continuously moving, even when you break down the length of the rope into shorter segments, you're going to be over-estimating the work as the rope was getting even shorter over the period of that minute. So then you have to re-do it checking in at 30 seconds, but then you're still wrong. And so you check in every 10 seconds, and then five and then one -- always ending up with an imprecise answer. Eventually you set up the number of times you check in to infinity and it all works out, so now you know everything you need to know about calculus, except why it shares a name with the stuff on your teeth. 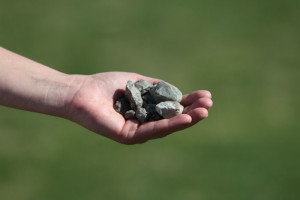 Calculus is another name for stone. A pile of stones decreasing in number over time as they did in the taxi, is similar to how calculus problems are set up and so Calculus was named. Hardened plaque is also "like stone" and, according to the article, it seems to live on infinitely. So, there you go.

This has been another questionably necessary blog post brought to you by yours truly.

P.S. I wrote this because so many people take calculus and are never told, in simple, straight forward language, what they're actually doing. It's super-important to learn the principles of something before trying to learn the details. When are more people going to get this and adjust?