This is how it went down: My husband and I decided that we wanted to travel abroad for a year. But in order to do this, we needed to get a bunch of work done ahead of time, which meant leaving our rural life in Washington and moving back to California for a year, where most of our working buddies live. We wanted to be less encumbered with stuff, which meant huge Garage Sale. 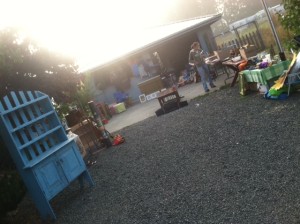 Some background: When we moved to Washington we sold everything, or at least all the "non-essentials." Now (two years later) about 70% of the essentials have been re-categorized to the garage-sale category.  Here is an example of an essential-to-my-life item two years ago: margarita glasses. 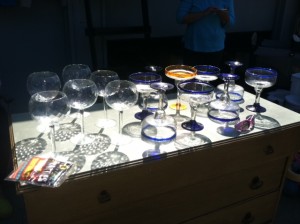 Keeping in mind that I have not actually had a margarita in 4 years nor do I really love margaritas (I'm more of a coconut and rum kind of gal), I have hauled these nine spectacular glasses around for 4 moves. I've used them twice in 3 years and one of the times it was to trick my kid into drinking his green smoothie. 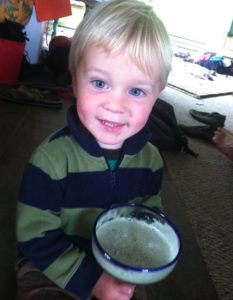 Hint: If you want your kids to try new foods, pair them with a new tool, like chop sticks, margarita glass, or silly straw.

As the glasses were waiting to be sold I looked at them about 30 times with a sort of, "shouldn't we keep these?" look on my face. Can't we put them in storage? What happens if I want to throw a Mexican-themed party and I don't have these glasses? Because even though I don't have time to shower, I might throw a Mexican-themed party. And writing this triggers the memory that I just had a Cinco de Mayo party and served homemade horchata and not margaritas. Also, who has ever turned down a margarita in a paper cup? WHY IS IT SO HARD TO LET STUFF GO?

I don't know if our relationship with containers is improving the human being much. I think it could be said that containers as a concept -- that we will hold now something we might need in the future -- could be the underlying theme to our demise. Also, I'd like to note that I'm not trying to sound pious here -- or whatever the un-religious equivalent of pious is (the thesaurus went at the garage sale!). We have plenty of containers we are taking with us. P.S. My personal container-vice is books. I’ve got a 500-pound monkey on my back called “Katy’s reference library” and no plans to eliminate, consolidate, or transfer to a digital containment device. Hear me when I say “I am not chastising people for their love of their thing” only pointing out that we all probably have a non-negotiable thing. Maybe a solution is looking to where we can un-container instead of where we cannot.

Anyways. I’ve just written this entire post and left out the most important part: When it came time to pull out of our driveway -- our van and 8X5 trailer (rent a container!) full of our essentials -- we decided to stay.

For the last few days leading up to the move, our two-year old began to demonstrate significant signs of neurological stress. My husband and I reviewed our plans and decided that a move wasn’t necessary and that our family was better served by our slow-pace town, high-quality food, and available alloparents (aunt, uncle, grandmother, and cousins).

The moral of this second half of my story is this: The notion of alignment exceeds the physical. “Being in alignment” can transcend knees and hips and includes, in our household, how decisions are made. Leaving felt good and seemed right, until it didn’t. Making a decision (at 1:30 in the morning, over a Guinness no less) required a certain amount of flexibility that has taken years to cultivate.

As someone whose previous way of deciding was, “Will Everyone Be Happy With What I Have Chosen, And If Not, Keep Struggling With Finding A Solution That Hurts Nobody’s Feelings,” this choice was the mental equivalent of a calf stretch. Loading mental tissues previously unloaded. Making everyone happy is impossible. Making a decision to benefit the well-being of my family is easier.

A last-minute decision not to move feels a little bit like how I imagine jilting someone at the altar feels. Only instead of having to deal with a bunch of sweet blenders and crystal vases, I have a 8 X 5 trailer full of stuff and nowhere to live. 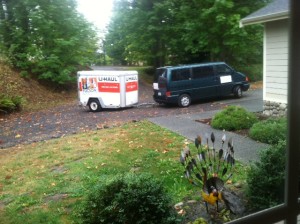 Just kidding. That morning (which was yesterday), we serendipitously found our dream location -- a 1920’s farm house on an acre with a stream and covered with a small fruit orchard.  It’s 2 miles from our old house and costs $500 less than the single-bedroom apartment we once had in California. Here's a shot from my back porch (and it has a porch!): 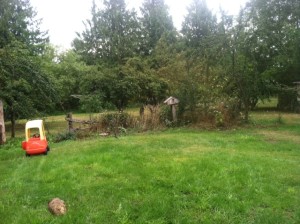 So. I just wanted to let you know that we made the world's quickest move back to Washington. And I’m not even going to try to get those margarita glasses back. I’ve moved on. Two miles, to be exact.