First off, I have to say that I stayed in Beverly Hills -  at a super-swanky hotel, even.  Only on closer inspection, there was neither a bathtub nor a tea kettle.  Evidently if I wanted to soak, I should go up to the spa and get a service.  Or, if I wanted tea I should order it from room service.  For $11.00.  Out of my league.  I saw a bunch of super-model statues posed in the lobby and out front to give it that Hollywood vibe.  More close inspection.  Nope, those were actual super models, hanging out in the lobby and around the outdoor fireplace surrounded by a library.  Upon closer inspection, the library was fake.  Real people.  Fake books.  I was starting to feel a little out of my "zone".  I decided to make myself feel better by having valet (which was mandatory - he chased me down) park my limping Honda Civic.  With dirt all over it.  And a squeak in the wheel well.  Does anyone out there know what I'm talking about right now?  But, I got over feeling out of place and got prepped for the Tic Tac (registered trademark) Celebrity Cocktail Party.

I am bummed for not taking a picture to share of the Tic Tac Celebrity Wall.  It was covered, and I mean COVERED entirely with Tic Tacs.  The words and images were all created by different colored Tic Tacs.  This was super-cool the first night.  By the next morning, however, the wall had gotten slightly wet and attracted a giant swarm of bees.  Bees with Minty Fresh Breath.  They had to call in an Emergency Bee Keeper from Hollywood to round 'em up while breathmint artists got to work repairing the wall.  Nature does Beverly Hills...Pandemonium!

The cocktail party was fun -- we all got to roam around checking out all of the stuff celebs would get over the next two days.  There were clothes, jewels, cosmetics, trips to the Caribbean (!), cook books, hair extensions, and My Booth...Curing the High Heel Hangover.  In an effort to save the stars from themselves, we were fully stocked with My-HappyFeet alignment socks and some Fix Your Feet DVDs, and a half dome, where celebs could hop on to sample the calf stretch if they were so inclined.  Out of all the ladies at the party I only saw TWO pairs of flats.  One pair was on my feet and the other was on a teenager.  After about an hour, this (tall!) lady sits down next to me on a bench and says "I don't want anybody to see this, but I have to change my shoes."  No joke! She then pulled out an old beat-up pair of slippers from her bag.  At the cocktail party.  About two hours into the party, all these women were walking around with flip-flops and their lovely dresses.  I don't get it.  Why not buy a nice pair of lovely flats that actually go with the outfit, and look smashing all night?  Everyone loved my new Earth SWANK suede boots (flat) and kept saying "I wish I had worn better shoes!"  Here's the High Heel Hangover Booth... 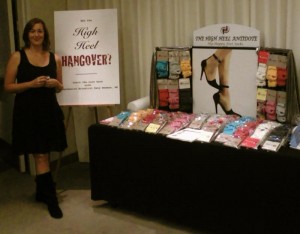 The next day celebs came -- a lot of them -- from many shows that I'd never seen and I few I had!  Luckily, I didn't have to see their show to know if they needed the alignment socks...I could see their feet!  These poor people wear super-high heels EVERY DAY and had the feet to prove it.  I met so many super-great folks, here are some of the pics:

I know, everyone always says Why do the CELEBS get all of the free stuff when they could actually afford to buy it?  Because...that's how it works.  But, to spread out the all-star treatment, My-HappyFeet and Aligned and Well are teaming up to gift two KatySays.com readers with their very own High Heel Hangover Kit -- a pair of alignment socks and a Fix Your Feet DVD!  Everyone can earn one entry by leaving a comment about their best foot or footwear story, or, best celebrity sighting.  For all you Facebooking, Twitter or Blogging folks, earn an additional entry by posting this blog post and contest to your FB page, Blog, or by Tweeting this:  I'm CURING MY HIGH HEEL HANGOVER with @alignedandwell! I'm entering to win free alignment socks and DVD, U can 2! From http://fb.me/HNw82ecG

If you tweet or post on your own blog, make sure to come back here and post your site or tweet name so I know how to FIND you!  I'll draw the winner on Monday, September 20th.  Ready, Set, GO!!!