Body alignment is the study of the interrelationship between body parts, as well as between those parts and the ground and the gravitational force. Alignment science considers how particular body positions change the various loads and forces generated within the body. 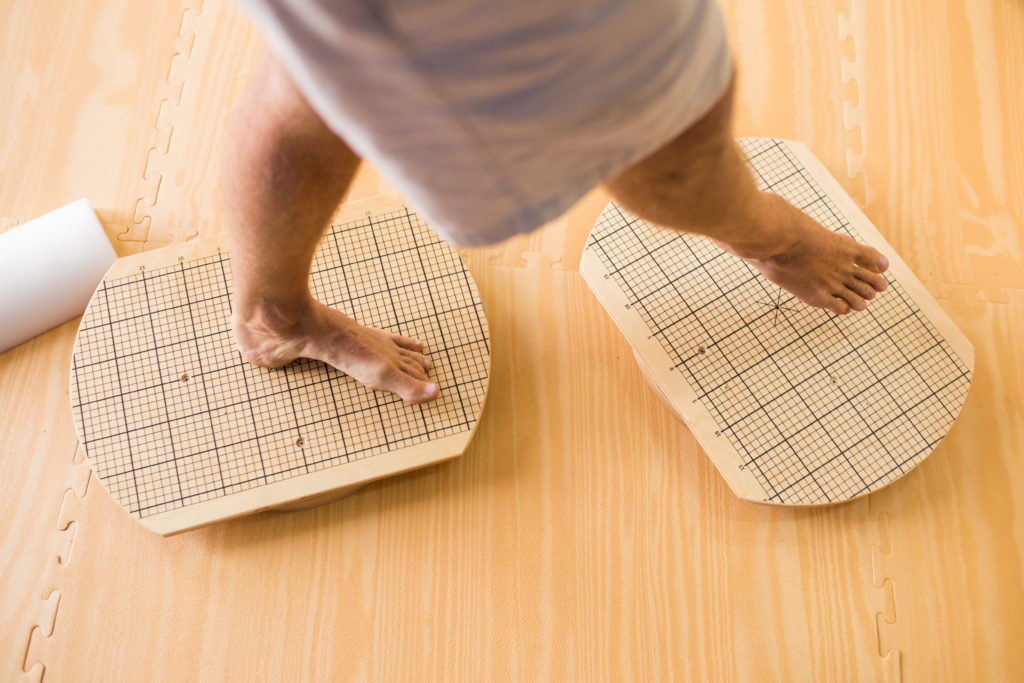 Changing the position of your pelvis can make your hip bones more or less weight-bearing and lifting or lowering your rib cage changes the compression of the discs in your lumbar spine. These are examples of adjusting your alignment. Human alignment serves the same kind of purpose as car-wheel alignment: There is an orientation and appropriate range of motion to be found in every part that minimizes damage and promotes longevity of all the parts of the vehicle—or of the body.

Paying attention to the forms I assume when moving is the tool I use every day to make sure every movement is moving the parts of me I want it to. And I teach students how to evaluate their own movements, and get the results from a movement they want, by using this amazing tool. Alignment is most often discussed and applied during exercise class, but alignment is not how you’re using your body when you’re exercising, it’s which loads are being experienced by your body over all time. Body alignment, like car wheel alignment, can be thought of in ecological terms and includes things like how often we’re moving—over an hour, a day, a year, and a lifetime. Alignment also includes a volume and distribution of movement. If you park a “well-aligned” car in the garage most of the time, there are new forces introduced from the static positioning of the car that start quickly wearing it down. “Good wheel alignment” is relative to the way a car is driven. If your drives were solely composed of 70 mph races or skidding out, you wouldn’t get the same wear as another car with the same positioning being driven a different way. There are a range of speeds and a volume of driving that need to be considered. Similarly, moving with good form or alignment includes how often you’re moving and what all the types of movement are. “Good alignment” is the sum total of forces created over all time. Even if your form is great in yoga class, if a yoga class (or any workout) is your only bout of movement in a day, your entire movement practice is out of alignment, so to speak. Most people have heard of cross-training—doing a lot of one thing rarely generates the forces your body needs to operate well.

Natural movement is the movement that would occur throughout our days were we living in nature. This describes not just the types of movements, such as squatting, hanging, climbing and walking, but also the frequency and variety of these movements. Walking over our modern flat and level surfaces for an hour a day is an entirely different proposition from walking many miles throughout the day over varied terrain, at varied paces, in varied temperatures, carrying varied loads. The variables involved in natural movement are essentially infinite, and those variables are what keep our trillion cells moving with squishes, pulls, and twists.

The human body developed under the influence of natural movement, which involves not only a ton of movement, but a ton of movement diversity. Just like your body needs a wide range of dietary nutrients, it also requires a wide range of movement nutrients. Our current movement practices can be nutrient-deficient in a couple of ways. First, many of us aren’t moving at all. In this case we’re sort of movement-starved. In other cases, we might have a daily movement routine—but if it’s only an hour a day, we’re still close to being movement-starved, and if it’s the same routine, it’s like eating only a single food over and over again. Even if that food is super nutrient dense, no healthy diet is comprised of a single food or a small handful of dietary nutrients. Eventually nutritional deficits reveal themselves—including when we’re deficient in certain movements, i.e., when our movement is out of alignment.

To be clear, almost all of us in these modern times are out of alignment. The magnitude of our sedentarism—both in terms of quantity and diversity—is staggering. In my book Move Your DNA, I write about evaluating the crazy number of unique positions the foot is capable of. Because each foot has 33 joints, the number of unique ways the foot can be distorted is enormous—8,589,934,592 (found by calculating 233). It’s also important to mention that to make this calculation, I had to assume each joint could only move to one other position, which is like saying your knee can be either all the way bent or all the way straight. If we allowed three positions for each joint, the number of unique foot positions would be 333 (about 5.56 x1015, which is 5,560,000,000,000,000), four unique positions 433 (about 7.38 x 1019, which is 73,400,000,000,000,000,000), and so on.

Now extrapolate to the rest of your body, which has over 300 joints. This means that the number of unique positions possible by you (if we only allow two positions for each joint) is 23⁰⁰power—which, calculated, is 2.04 x 10⁹⁰. I’d love to remove the decimal and add the eighty-eight zeros for effect, but instead I’ll just write this: In light of the body’s capacity for this almost incomprehensible number of geometrical positions, cross-training as we do it—adding some yoga to your regular running routine or swapping a dance class for a cycling class—seems like a pretty small step toward moving more.

I mean, it’s a step, for sure, but the notion of cross-training as used in exercise is the smallest possible way to think about the largest thing you can do. We need to move more—way more outside of exercise class, but also within it.

Moving more is pretty straightforward. If you are currently quite sedentary, start loading and moving more however you can and learn some form to keep your parts comfortable. Start with short but regular walks. Start carrying your groceries in your arms, always take the stairs, and opt to sit on the floor instead of the couch. If you’re already exercising an hour a day, figure out which elements of natural movement you might be missing. Do you walk 3–5 miles daily and could you walk 15–20 miles pretty easily? Can you move across the monkey bars? Do a pull-up or two? Carry a 10–30 pound load of groceries a few miles? Rest in a squat position for a minute or two? Getting more movement can be simple no matter where you live—country or downtown Manhattan, you can add more movement variety into your life.

There are even ways to bring more movement into a mat-based class. Consider where most of us do our movement: inside a box-shaped room, on a square mat, all facing the same direction, all moving in the same linear patterns. Our movement has become “laboratory” movement—very isolated, moving one part at a time. While most of the movements we use in classes are elements of larger natural movement feats, most doing (or teaching) them don’t have a clear picture of their origins. Missing from most movement-teaching curriculum is where human movement comes from—what natural human movement looks like in its most natural or organic form. 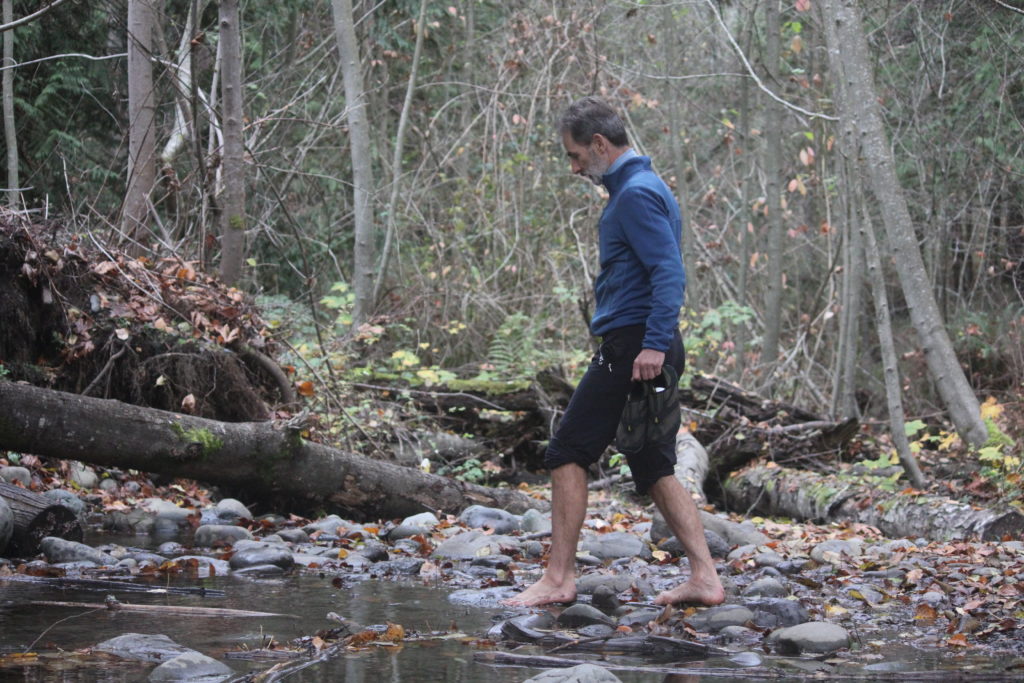 I teach mat-based exercise as a segue to the larger, nourishing, movement-based experiences that occur when we move outside in nature with community. Bringing a broader understanding of alignment and natural movement to the mat—and then taking them far beyond—is not only regenerative, it’s also perhaps the best way to increase the nutrient density of your life.