Today is my birthday. I am thirty-seven years old. This list started as a reflection of my years-to-date and ended up growing into recalling fond memories I had forgotten. If you make it to the end without falling asleep, there’s a birthday gift for you. xo, KAB

1. I only wear stretch pants.
2. I never developed wisdom teeth.
3. I have a pin head.
4. I grew up on an apple farm and am an apple connoisseur.
5. “and am an apple” is a fun thing to say.
6. I needed help spelling connoisseur.
7. In a seven-year span I’ve moved 10 times.
8. My favorite fitness exercise is a walking lunge.
9. I like climbing or running hills. But only up.
10. My favorite book is Mating, by Norman Rush.
11. I’ve been to the following countries in this order, but not on one trip: USA, Cape Verde, Zimbabwe, South Africa, England, Scotland, Mexico, Canada, Tahiti, Spain, Bahamas, Italy, Vatican City, Corsica.
12. I’d really like to visit Greece, Madagascar, Australia and New Zealand next. You know, all at once.
13. I was 32 years old before I had my first Buffalo wing.
14. I have 9 siblings: 3 sisters and 6 brothers.
15. I used to love New Kids On The Block. When I was 12, not when I was 22.
16. Nothing against all you 22-year olds who love NKOTB.
17. A few years ago, I sat across the aisle from Jordan Knight on a flight from LAX to BOS. He followed me to the airplane’s bathroom. He probably had to go just when I happened to go too. We talked. Uncomfortably, because, you know...we were standing in front of the bathroom. It's so funny how, something that would have KILLED YOU at age 12 was kind of ho-hum at age 35. But then again this was the moment I realized that all dreams come true although the timing might be off.
18. I’ve also met Tony Hawk. 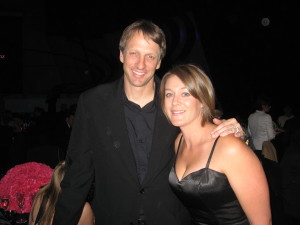 19. I met Tony Hawk at the Laureus Sports Awards in Spain, where I was flown in to work with Morgan Freeman. The trip entailed a $13,000 first class ticket, in one of these"pod" bed-recliner seats which you have all to yourself, where you could eat and drink whatever you wanted, get a massage or pedicure (for free, or for $13,000 I guess) after takeoff or before landing, and 4 days at the Ritz Carlton, where I got the best hot-cold stone facial of my life. They put you in a BED when you are done and bring you tea while you nap there for an hour. It also involved a private chauffeured tour of Gaudi's buildings, 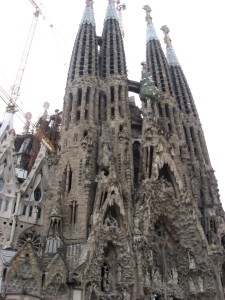 and 90 minutes of work. Seriously. It was the most extravagant week of my life and I did one session. One session. For a trip halfway around the world and exposure to a lifestyle that I have very little interest in, but enjoyed for one week.
20. I got a “D” in Physiology the first time I took it.
21. I got an “A” the second time but it was the first time I realized that I wasn’t going to cruise through college in the same way I had cruised through high school.
22. I have a minor in Math and a minor in Old Testament History, which should really be called Hebrew Scripture History. The Geography class I took while studying the Cradle of Civilization was taught by a 140 year old man. He introduced himself saying, "Have you heard of the plate tectonic theory? That theory hadn't even been introduced when I was getting my PhD." Realllllly old guy. And fantastic teacher.
23. Once I accidentally enrolled in a graduate-level Mathematics class (which is for people who have degrees in math and then come back to school looking for additional punishment) when I was a junior in college. I talked to the teacher because he kept talking about proof form

and I didn’t know what he meant, but I did know that I needed 3 more math units, even if they were over my head, and I only had Wednesday evenings from 7-10PM to do it. He said I could stay and accepted my work knowing that, instead of proofs, I solved things by hand, drawing balls and lines and counting them all long hand. 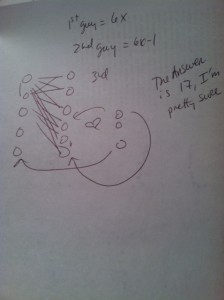 24. Symbolic Logic was my favorite course in school. I took it four times -- once in the Philosophy department, once in the Math department, once in the Computer Science department and once in Summer School. Can’t get enough Logic.
25. I am fluent in Sign Language and have a sister that is deaf.
26. I really wanted to be an astronaut, and just after the Challenger exploded (we were all watching it in my 4th grade classroom) my mom asked me if I still wanted to be an astronaut and I told her yes, even more so. 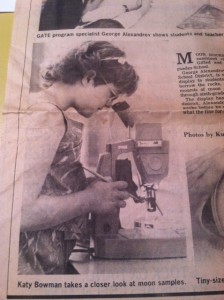 27. I won the spelling bee in First Grade. I lost the 2nd grade Spelling Bee on the word connoisseur. Just kidding. It was families. I spelled it f-a-m-i-l-y-s. My loss was preceded by my internal mockery of Rob M.’s losing to the word turnip. Which he spelled T-U-R-N-U-P. Which just goes to show you, karma is instant.
28. I was a personal trainer and aerobics instructor through college and was Bally’s Instructor of the Year. I LOVE teaching exercise of any kind and I can get your heart rate to 185 BPM, on a Step, all while telling you jokes. Really.
29. I still have these pop-up books from the Christmas of my 8th year. 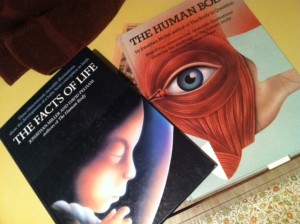 They're amazing. If you could still find them, they're great if you have a kid who is into science and giant pop-out penises. I spent a lot of time pouring over these books. These books absolutely contributed to who I am and what I do. You can thank my mom. 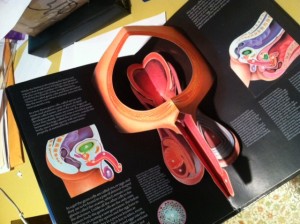 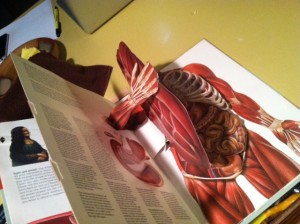 30. This was my autobiography in the 4th grade. My favorite part is where I wrote and then crossed out blueyed. I blend words inappropriately like this still today. It's a gripping story and evidence of my first and last plagiarism. I obviously ripped off my baby book, which was written by my mother. Although, if pressed, I do believe I could come up with a "writing style is genetic! Get off my back!" argument.

31. My husband, an Ayurvedic practitioner, went as Ayur-Vadar for Halloween one year, proving yet again that pun costumes are not funny. 32. Looking through old pictures is fun.

33. I've made 17 corrective exercise DVDs, and this was my favorite shoot: 34. I've written one book, and am working on a second.

35. I read every single one of your emails. I don't answer them because there just isn't the time, but please know I do read them and you've been heard. 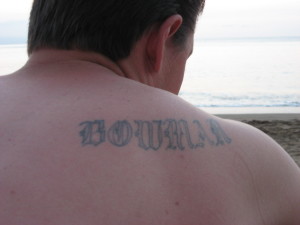 37. I wanted to give you something, for hanging around the last few years and spreading the word about the work that I do. Here is a 30-minute class I filmed just after having Roan. It was originally going to be a 30-day program but we got so swamped around here, we only have about 20 of them finished. I hope you enjoy it (click) and follow it up with a little walk. Because it's MARCH FOURTH, YO! So go ahead and march forth!

{If the video doesn't play on your computer, change your browser and/or make sure that you're fully updated.}